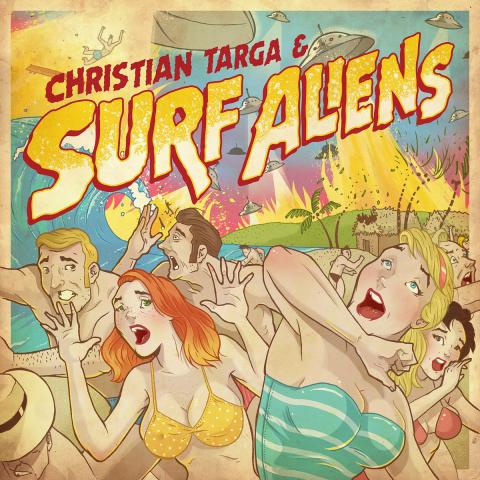 Christian Targa plays for the punk band Blind Pigs who have been around since the 90s, and he certainly didn't leave his punk influence behind; my first thought on the opener "Abdução" was Dead Kennedys. Those first three tracks all have a great sense of panic and terror before cooling down a little bit into the more anthemic "Aos Amigos", which still retains a punk guitar tone while ditching the attitude. He doesn't really slow down entirely until "Nova Lua", a nice closing track. I know... END_OF_DOCUMENT_TOKEN_TO_BE_REPLACED 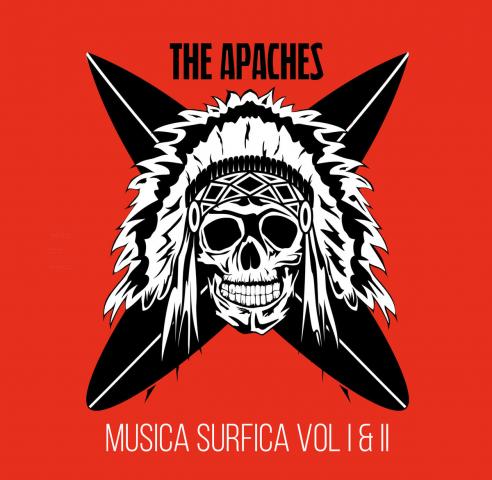 The Apaches hail from Arizona and a bit of open-air desert sound definitely creeps into this. Sure, it's definitely surf and not spaghetti western or anything, but it tends to deal in solitude more than it does in adrenaline. I believe all of these are original compositions and they have a good sense of when to play pretty ("Grim Fandango" is a good example) and when to punch ("Space Chase"). Download is on bandcamp and by the looks of their... END_OF_DOCUMENT_TOKEN_TO_BE_REPLACED 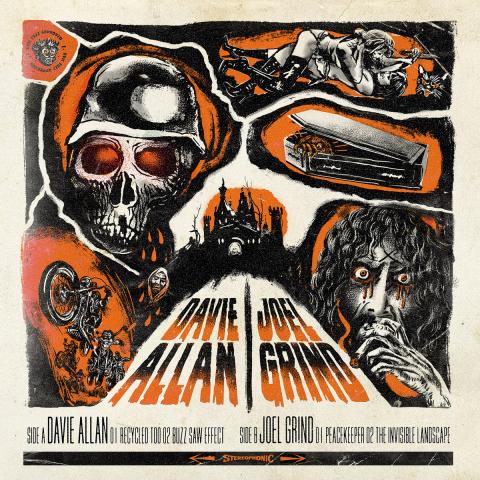 As many of you are aware, Davie Allan has not exactly been hibernating: he's been pumping out new material on a steady basis since the 90s. However, they're usually self-released and on CD. So thanks to Joel Grind he's not only seing a vinyl release, but it's on the legendary metal label Relapse. While tribute albums don't usually feature the artist that tribute is being paid to, it does feel like that's what's happening here and it's all very fitting.

Each side is two tracks. Davie's... END_OF_DOCUMENT_TOKEN_TO_BE_REPLACED 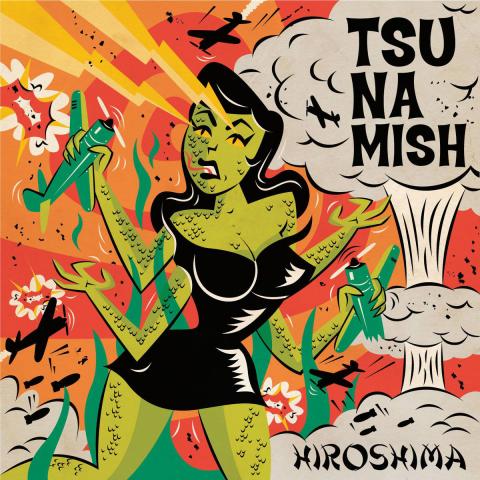 Tsunamish have been on a steady one-EP-a-year release schedule so far, and this should please if you've been a fan of them this far. For the most part it's upbeat modern-traditional surf rock, though there's a bit more of a punk sound on their Bad Religion cover of "We're Only Gonna Die" and they have vocals on their cover of Holly Golightly's "There is an End".

I've always enjoyed Tsunamish's album art and though the woman on the cover is certainly not showing Amish modesty, this is... END_OF_DOCUMENT_TOKEN_TO_BE_REPLACED 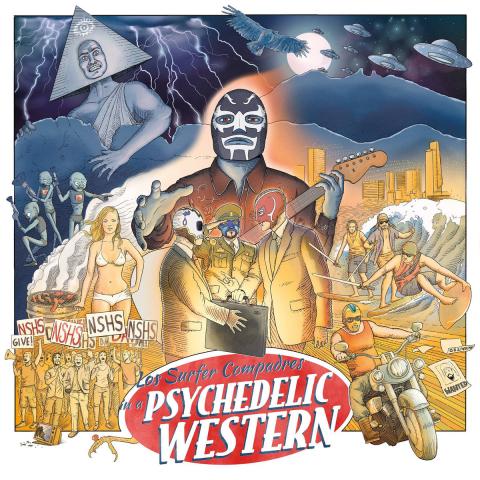 One of the things I like about instrumental music is that you're free to craft your own narrative from the music. This is still the case with Los Surfer Compadres' new album, but they've given you a lot of thought pieces to help you along on their album art: surfing with swords, aliens, a cookout, a protest, a bird with a ring on its talon, an angry god...

Indeed the music itself visits spaghetti western, fuzz guitar, a variety of different moods, though there's definitely a pretty... END_OF_DOCUMENT_TOKEN_TO_BE_REPLACED 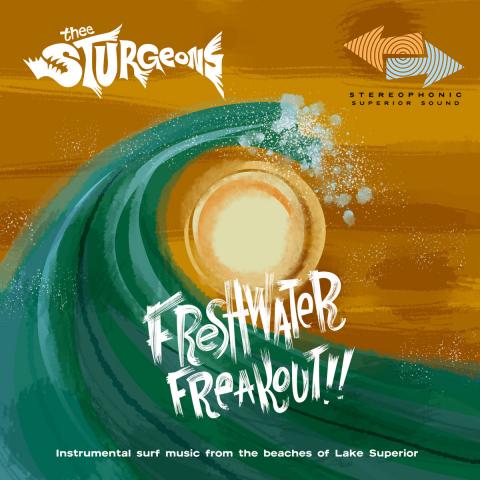 This looks like the debut EP from Minnesota's Thee Sturgeons, and they have a lot of fun with it. The most straight-forward surf is "Giant Squid Attack" which already has some fun tradeoffs between guitar parts, but tracks like "Sand Dune" is where I think they're really coming from. Surrounding its middle-eastern flair, is a surprisingly loud fuzzy bass bubbling into a weirdo bellydancing beat with farfisa hovering all around. "Kimchi Gammi" takes that same off-kilter dance groove to a more... END_OF_DOCUMENT_TOKEN_TO_BE_REPLACED 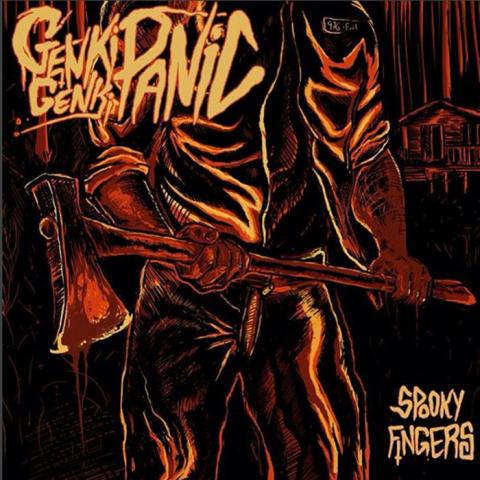 While I think it has gotten better in the 2010s, I think it's understated how often poor sound engineering has held back an otherwise decent surf record. What we have here is the opposite story. Genki Genki Panic's previous releases weren't hampered by their production, but "Spooky Fingers" makes an amazing impression in an instant, setting a brand new idea of what this band is about.

Genki Genki Panic aren't the first horror surf band out there, and plenty have scronked out a fuzzy... END_OF_DOCUMENT_TOKEN_TO_BE_REPLACED 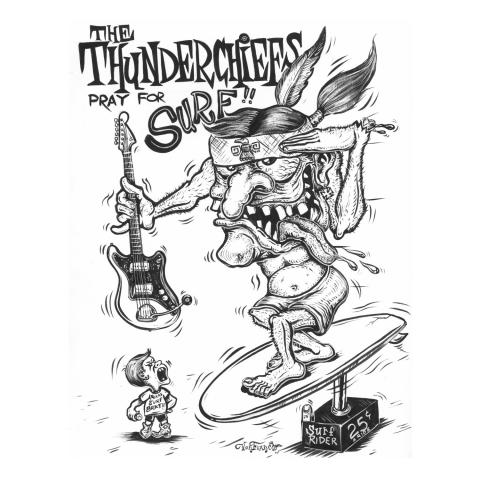 We've got a new 7" out from the Thunderchiefs: trad surf maestros from Austin, Texas. I haven't heard this one yet, but their split with The Surfites "Surf Nut" was well worth it. You can order it from Space Case Records. As far as I can tell, this one is wax only, nuthin' for your hard drives. 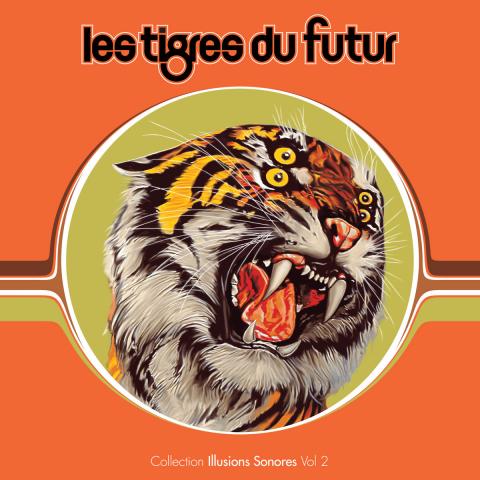 Les Tigres du Futur have a sound unto themselves, yet familiar enough for the impact to be immediate. As much as this is a guitar-centric site, they mostly serve as the crunchy, grinding infantry force. Leading the charge is the whirlwind keyboard, which deftly straddles both psych/prog mystery and adventure and a hip-shaking mod beat. If that doesn't sound very surf, it's because it's not; I don't hear a shred of Dick Dale, Ventures or even Shadows in this -- MAYBE Davie Allan or Link Wray... END_OF_DOCUMENT_TOKEN_TO_BE_REPLACED 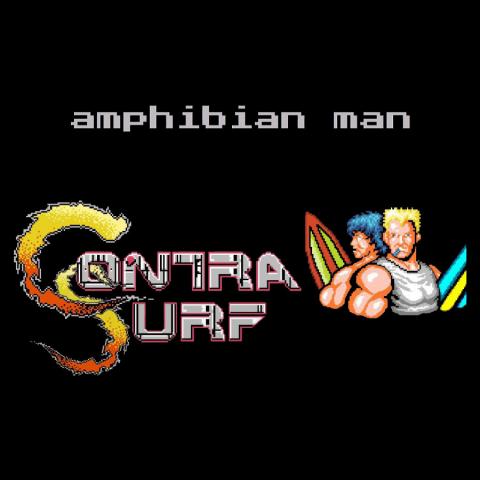 Two weeks after releasing their Speed Power Turbo Racer EP, Amphibian Man have YET ANOTHER release. This is about as easy of a write-up as it gets: heavy surf covers of songs from the Contra Nintendo game. It's as awesome as it sounds, and it's a free download. END_OF_DOCUMENT_TOKEN_TO_BE_REPLACED 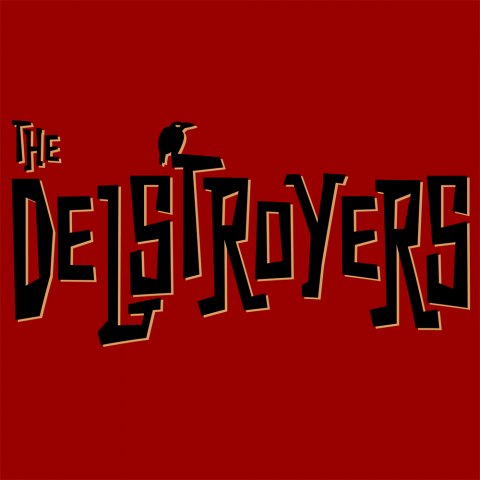 This is the debut EP from Seattle's Delstroyers. The play kick-em-in-the-teeth surf with a little bit of a horror edge to it. The winner of the 4-pack is "Take me to the Hell-Hop" with a some great guitar interplay, and moments of the guitars really cutting loose then cutting back. It's all good, fun, stuff that I could imagine being pretty fun live.

All four tracks are available for free download on their Reverbnation page. Looking foward to hearing what's next from them. 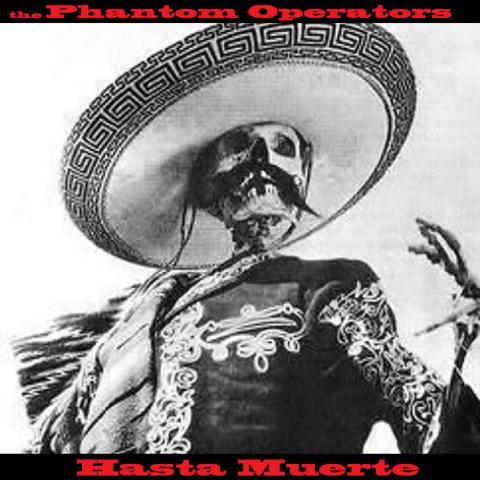 Though the Phantom Operators never keep you waiting long for more material, this is the second full-length from the Tennessee-based group. When listening to them, there's one word that comes to mind: desolate. The guitars go on and on, but with a bit of a melancholy and not so much of that California brightness. It fits the desert theme that runs thoughout much of the Phantom Operators' material.

That's not to say this is a moper: "Haole A-Go-Go" and "Cannibal Run" are more party-... END_OF_DOCUMENT_TOKEN_TO_BE_REPLACED 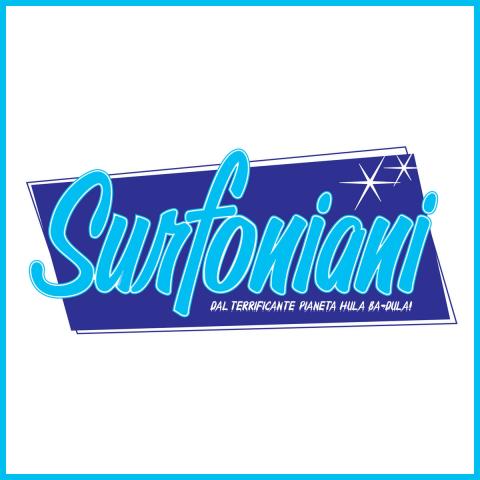 Here are 11 originals from Italy's Surfoniani. They've got upright bass, some very drippy guitar and drums, which gel into a bright and sunny modern trad sound. They've got a fair amount of beach party shakers like "Bikini", "Mai Tai Girl", and "Tiki Twist" though also a few cooler ones like "Red Waves". Give it a listen! 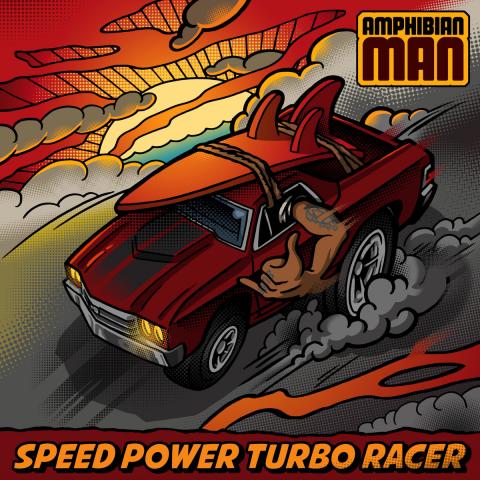 Amphibian Man released an LP less than three months ago, so I certainly wasn't expecting more from them, but I'm glad we got this one. "Speed Power Turbo Racer" also happens to be the name of all four tracks on this, and they all get the point across - this is 100% about speed and power to an almost overwhelming extent. Once you get settled a little bit, there are actually some good melodies driving these songs, and at 4 tracks it's over before it's too much -- unless you find it's too much... END_OF_DOCUMENT_TOKEN_TO_BE_REPLACED 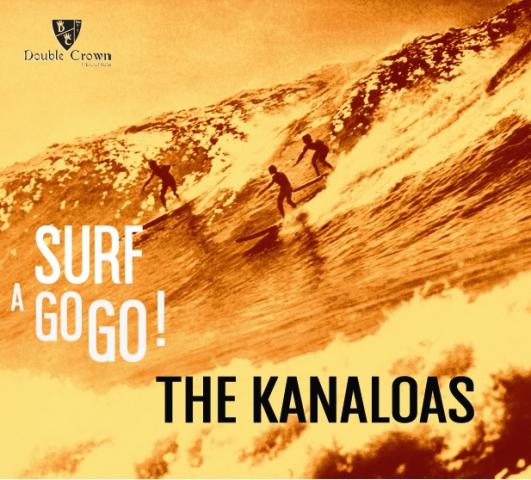 The Kanaloas are the latest group to be brought into the Double Crown gang. Though they've been around for a good while, they stuck to 7"s up until this point and might have passed you by (admittedly, this was the case for me). Now they have an 11-song LP under their belt with a simple but pretty choice of album art that broadcasts one thing loud and clear: "Trad". The Kanaloas perform in suits, and serve up 60's styled originals and a few obscure covers. I haven't gotten a copy of this yet... END_OF_DOCUMENT_TOKEN_TO_BE_REPLACED 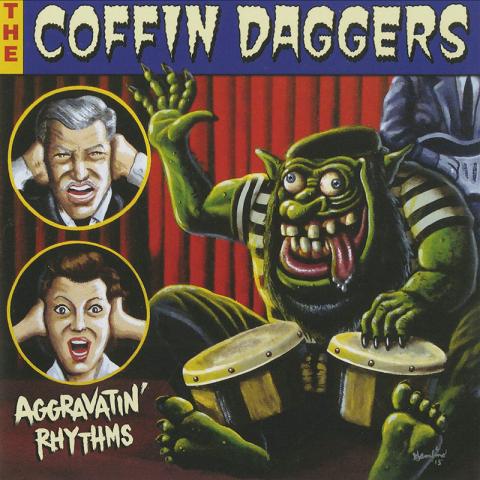 The Coffin Daggers' self-titled LP was a mainstay on Storm Surge of Reverb back in the WESU days. It struck a really great balance between loud, thundering power and traditional surf sensibilities. As I've suggested about The Madeira's first record, it would be very difficult for them to ever dethrone that effort due to my... END_OF_DOCUMENT_TOKEN_TO_BE_REPLACED 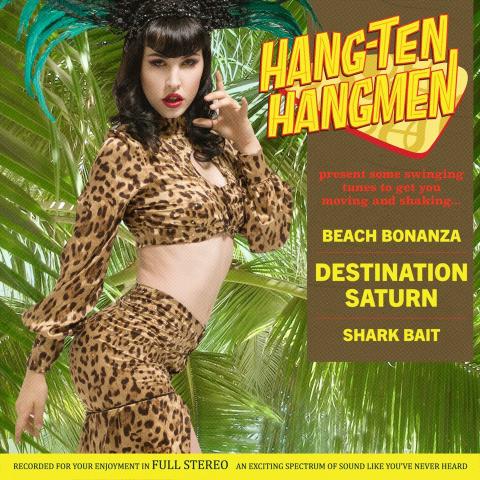 I've picked up a few Hang-ten Hangmen EPs a while ago and enjoyed the melodies that came through their goofball lo-fi horror sound. Maybe I missed the switch, but this EP seems to have shifted in a more modern trad direction. Not that I didn't like the old version, but the clips I've heard sound like the change has suited them well! It's punchy, bright, bouncy, and well recorded. You can download it from CDbaby... END_OF_DOCUMENT_TOKEN_TO_BE_REPLACED 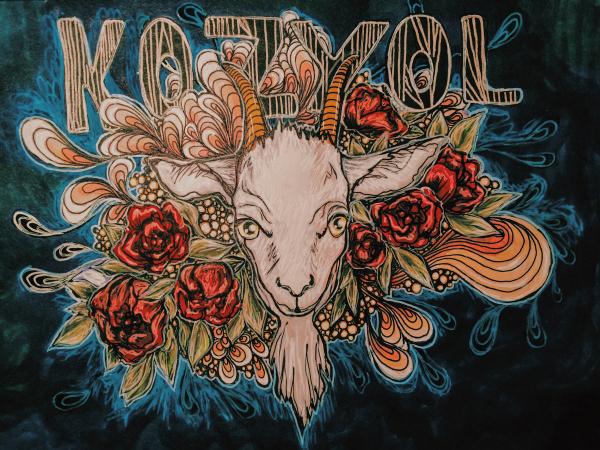 I don't know too much about Kozyol - despite being based in Portaldn, I'm guessing at least one of their members is Russian, which would explain why some of these songs are in what I assume to be Russian. Definitely pretty funny for me, writing this on a trip to the nation of Georgia and having just gotten back from the Stalin museum. That really doesn't have anything to do with anything.

The Moths release To Hell With 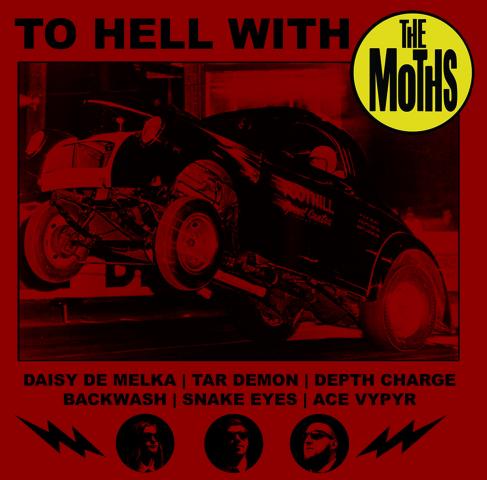 The Moths keep at a pretty quick pace both musically and in terms of a release schedule, with 3 releases since last January. Like those others, this is aggressive, loud, and rude. The Moths are only a 3-piece, so they rule with tight playing and power rather than intricacy and composition. And that's fine, they do it well. Free download, give it a try. END_OF_DOCUMENT_TOKEN_TO_BE_REPLACED 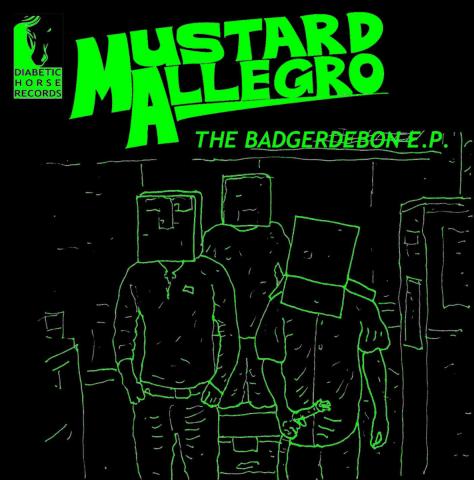 Though recently released, this one is actually pretty old! I'll go ahead and quote their bandcamp page here.

Here is our Incredably difficult second release which has taken nine years to actually release. We got carried away with the recording by using way to many mics on the guitar amp and way too many takes multi tracking and adding extra instruments computers were a lot slower nine years ago and we ended up with an over welming 26 Gigabytes of sound files.