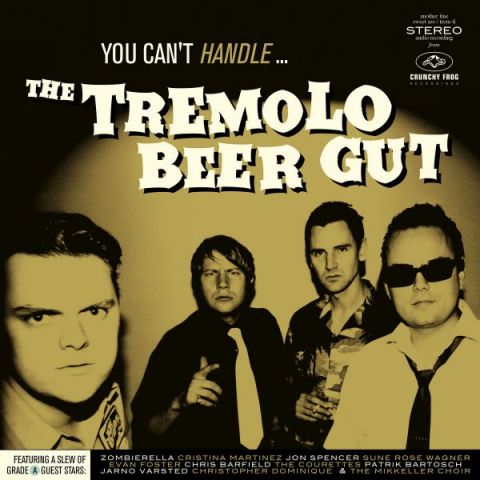 I feel like I've mentioned in past Gremmys something along the lines of "There weren't a lot of big releases this year" which had me wondering "What is a big release?". I mean, this is surf music, even Los Straitjackets are far from a household name. But this does feel like a big release year, with big releases from Les Agamemmnonz, Pollo Del Mar, Arno de Cea & the Clockwork Wizards, Surfer Joe, and of course these guys. They've hardly been dormant, with two... END_OF_DOCUMENT_TOKEN_TO_BE_REPLACED 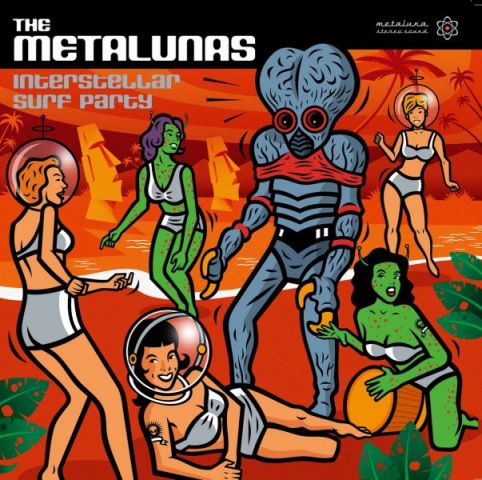 Bandcamp Friday means Bandcamp doesn't take a cut of what they sell, so ALMOST all of your purchase will go to the band (almost because Paypal exists). Which is to say it's a great day to stock up on music. It's also become a time for me to go back and write something about some recent releases to help guide you. 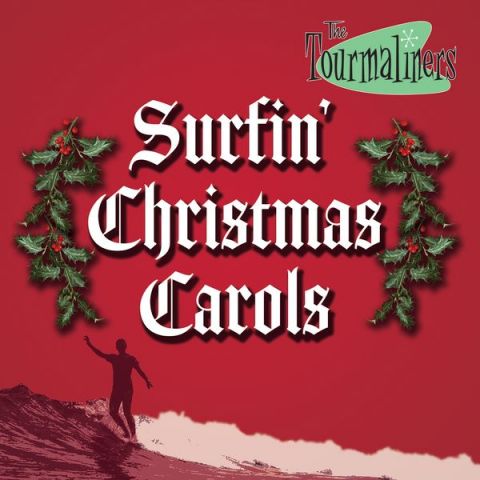 So there were some notable surf... END_OF_DOCUMENT_TOKEN_TO_BE_REPLACED

It's not bandcamp Friday anymore but I missed three releases 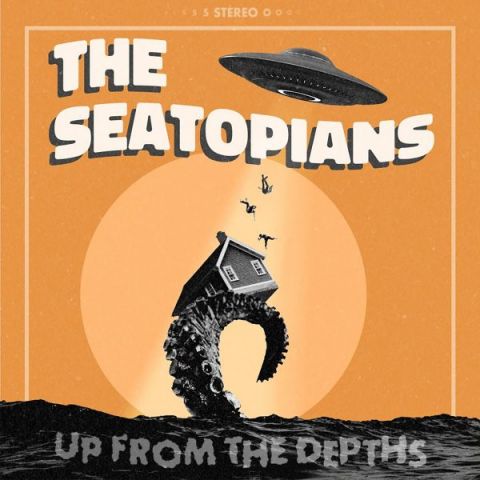 The tough thing about making articles about what you should buy on Bandcamp Fridays is that things come out ON Bandcamp Friday. And it sucks waiting an entire month to highlight them, especially when these three are just as high profile as anything that was in yesterday's list. So here's a supplemental article. 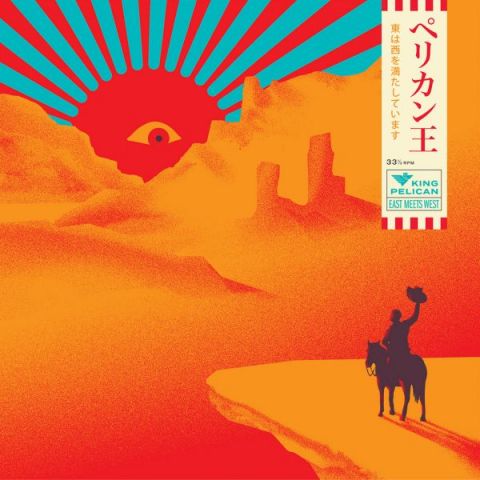 It's another Bandcamp Friday which means 100% of your money goes to artists, none of it to poor ol' bandcamp, some of it to Paypal. This is probably going to be a shorter one because a) there were a lot of releases but a lot of them were Halloween singles, b) there weren't a whole of of LPs and c) I'm kind of behind on prepping for the finale of the top 100 surf records of the 2010s.

But anyway, here's some standouts 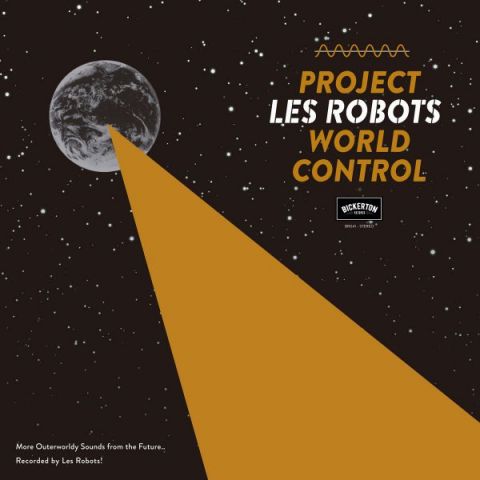 Another Bandcamp Friday where all of your money goes directly to the artists -- and I use it as a push to get me to write some stuff about new releases. This is by no means every release or even every good release, but they're the ones that stood out to me. Some oddballs in this group! Let's dig in 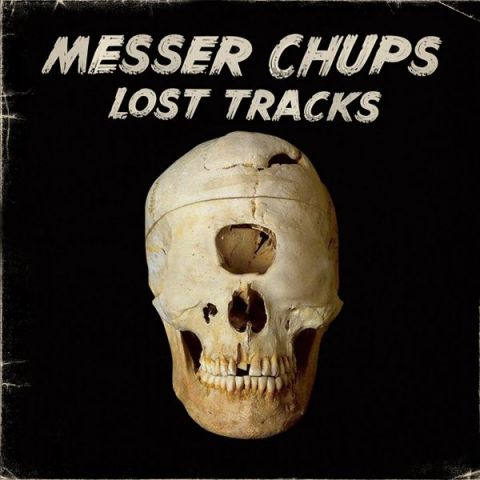 Another Bandcamp Friday where 100% of your purchase benefits the band. Admittedly this one snuck up on me, so forgive me if the reviews are a little hasty, but there's a good chunk of them! Here's some releases that I think warrant your attention. In no particular order. 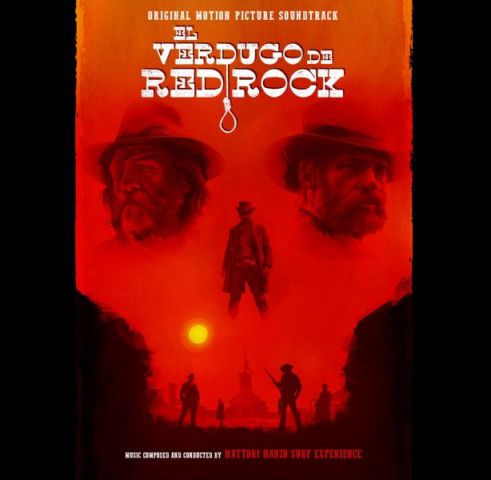 It's another Bandcamp Friday, which means bandcamp isn't taking a cut of sales on their platform and 100% of your money goes to the artists. If you've got money burning a hole in your pocket, today is a good day to spend it, and I'm here to help you decide what to spend it on. This isn't all of the surf music released on bandcamp in the past month, and there were good releases in the past month that weren't on bandcamp (and therefore not on this list) but these are some of the... END_OF_DOCUMENT_TOKEN_TO_BE_REPLACED 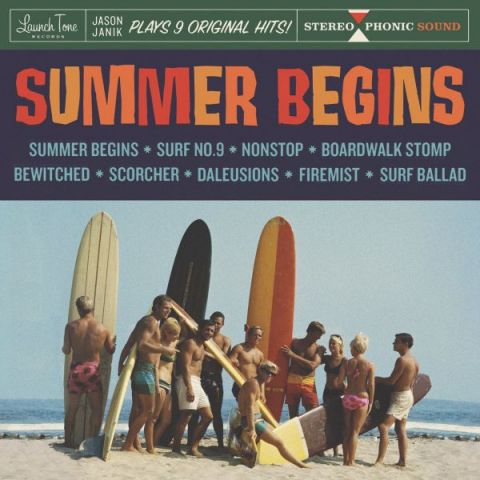 Summer Begins is a tight package of 9 lighthearted trad surf originals with a sunny beach attitude. From as best I can tell this is his first surf record, but that's not evident from a listen as he switches deftly from guitar tone change to the next, always sounding good. All of these are fun and center around strong, memorable riffs.

While beach party stompers like "Summer Begins" and "Nonstop" are the meat of the album, there's a great venturing into exotica on "Bewitched", and it... END_OF_DOCUMENT_TOKEN_TO_BE_REPLACED 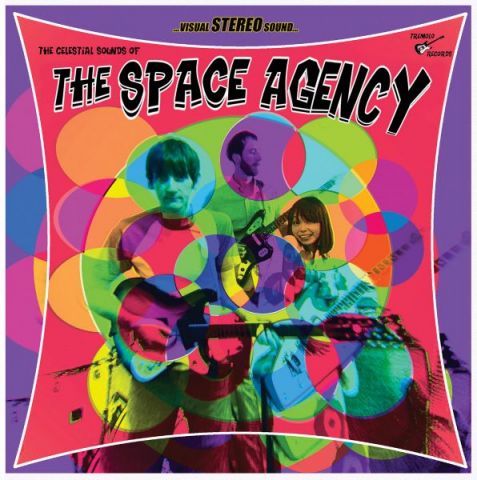 Though they've been dropping a few nice singles here and there, it's been 15 years since we've had an LP from the Space Agency, and they remain as special as ever. Somewhere underneath layers of fuzz and pedals is a pretty trad surf group with great dead-simple melodies that honestly could sound more 1962 than many groups if they felt like it. Give a listen to the least dressed song on this record "Alpaca Boogie" to catch a glimpse. What sets them apart is a dense collage of fuzz, tremolo,... END_OF_DOCUMENT_TOKEN_TO_BE_REPLACED 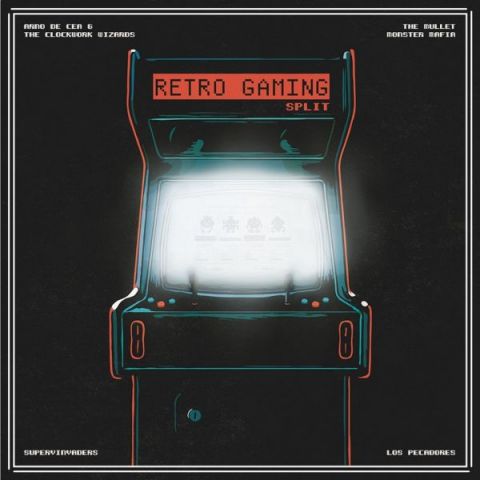 In the past few years surf has finally being sneaking in nods to another nostalgic form of instrumentals: video game themes. Off the top of my head, there's Amphibian Man's Contra covers album, Zelda themes from likes of... END_OF_DOCUMENT_TOKEN_TO_BE_REPLACED 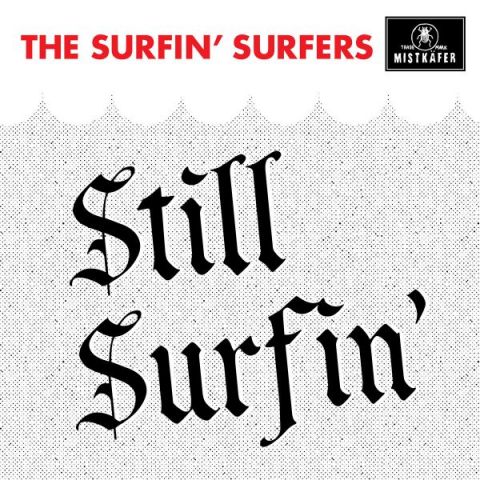 In a genre where originality is admittedly optional, The Surfin' Surfers almost embrace that low bar with their name, 3-color artwork, and the lack of original songs. However, I still quite enjoyed their debut "Surfers' Surf' and even bought the 7".

Their follow-up "Still Surfin'" is apparently scraps from that session deemed not good enough, but these scraps are still better than plenty of surf bands I've heard. These covers are pretty by-the-book, but they've got just... END_OF_DOCUMENT_TOKEN_TO_BE_REPLACED 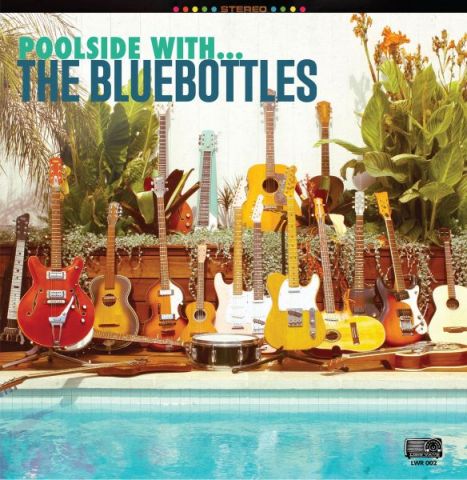 The title "Poolside with" may seem somewhat generic, but it's actually a bit of a clue. The Bluebottles aren't out to capture the adrenaline rush of a monster wave, it's a lighthearted album full of party music. Even though opening track, though lively, features an acoustic guitar lead, aiming to greet with an active dance floor rather than an overwhelming salvo.

However, this is also a cut above your average hawaiian-shirt clad grandpa... END_OF_DOCUMENT_TOKEN_TO_BE_REPLACED 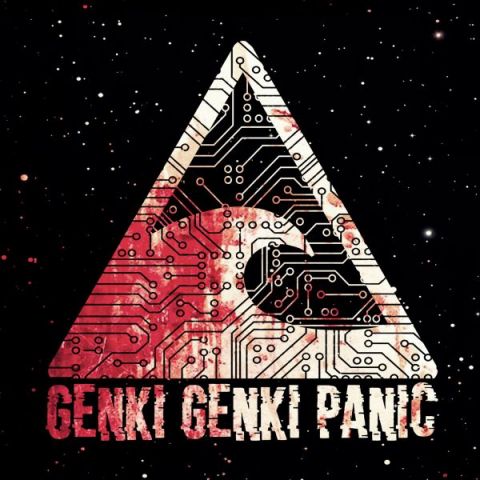 Genki Genki Panic stands at an unlikely intersection between Mike Patton, Cave In, John Carpenter, Danny Elfman, surf music, and nerddom. Their own description of this album is that it was supposed to be an epic noise/surf concept album, and it seems it languished and they were like "eh, it's the apocalpyse right now, let's just push it out." Oddly enough, I think it settles into something that feels just about right for this band.

Most of these tracks are labelled... END_OF_DOCUMENT_TOKEN_TO_BE_REPLACED 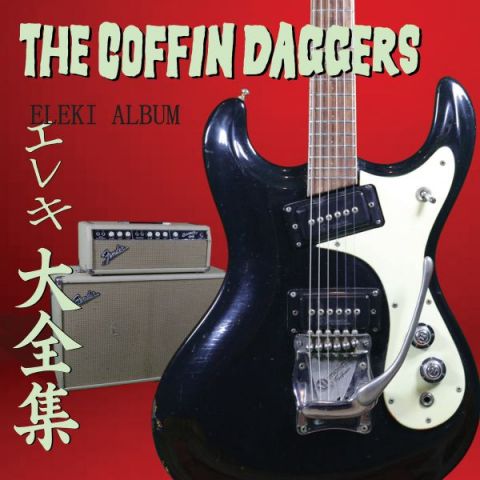 The fourth LP from Coffin Daggers is perhaps a bigger turn than having a google-eyed bongo-playing demon on the cover: it's a cover record! Of eleki tunes! For those unacquainted, Eleki is a Japanese instrumental rock & roll music, highly Ventures influenced, typically with very sharp, staccato guitar tones. Admittedly, Eleki is a bit of a weak point in my instro knowledge -- I always kind of hoped I'd go to Japan and blindly buy anything that vaguely fit the bill and learn from there... END_OF_DOCUMENT_TOKEN_TO_BE_REPLACED 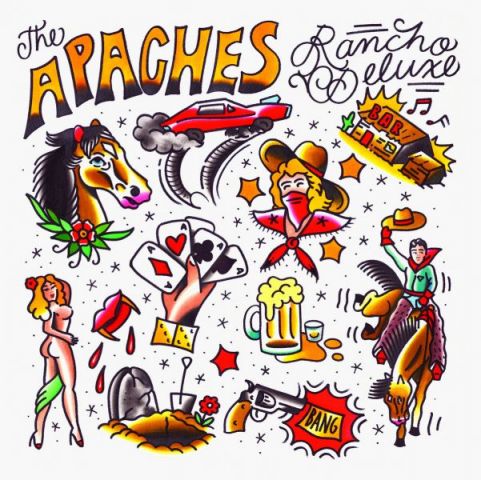 You know what they say about the eventual fate of good things, and in this case it's cool skulls on The Apaches album covers. It does not appear that this was their secret ingredient, however as this is my favorite record yet from them.

Skulls aside, this is not a big departure from this Phoenix-based group, and it's been hard to nail down why this particular release feels so good. They've always walked a line between straight surf and spaghetti western (often with... END_OF_DOCUMENT_TOKEN_TO_BE_REPLACED 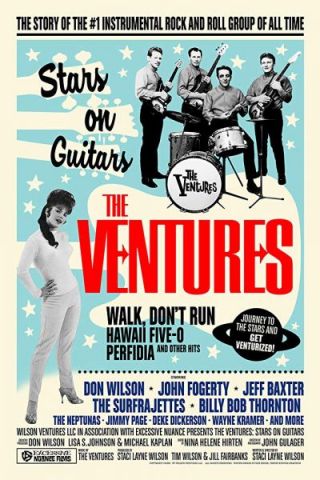 Last year there was an unfortunate collision of interests for instrumental music fans: two documentaries on The Ventures, each seeking crowdfunding at the same time. Stars on Guitars appeared to have suffered more from that conflict, raising considerably less than Walk Don't Run with roughly a third as many donors. However, this clearly didn't shake the team for Stars on Guitars, as their film readies for release while... END_OF_DOCUMENT_TOKEN_TO_BE_REPLACED 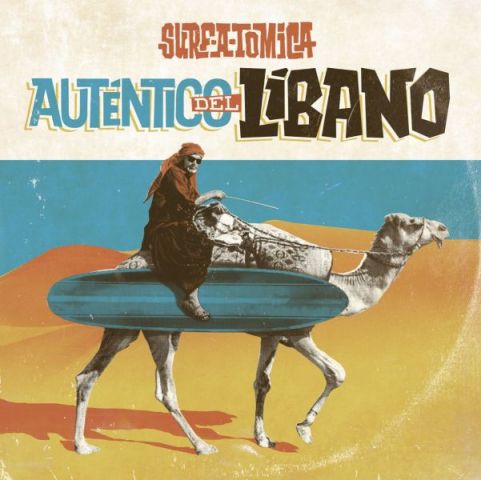 Surf-a-Tomica made their debut earlier this year with a flashy 7-song release full of great guitar lines and a great, punchy beat. Did they know they were going to release another 7 songs within the same year? While a full album would have suited them well, they took a good formula and made it great here.... END_OF_DOCUMENT_TOKEN_TO_BE_REPLACED 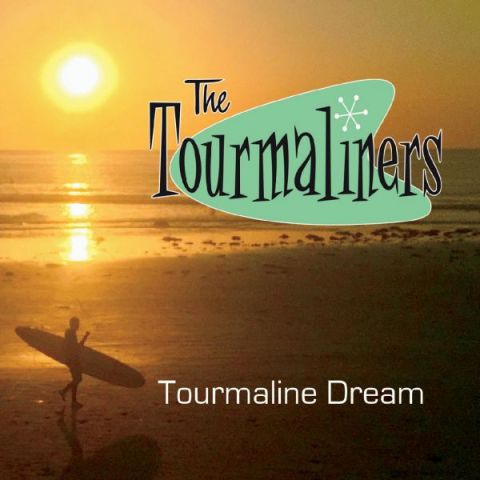 The Tourmaliners (named after Tourmaline Beach) are billed as a 60’s throwback band, but I suspect this like likely designated for gigs around town. For us picky surf fans, I hear a throwback to an unexpected time: 2nd wave surf! If I were to listen without context, I’d pin them right square at 1990, particularly with the reverbed drum treatment, and flavor of the reverb altogether. In fact, if you want a good frame of reference I’d point you to The Pixies’ version of “Cecilia Ann” off their... END_OF_DOCUMENT_TOKEN_TO_BE_REPLACED

Chewbacca's - The Return from Echo Lake 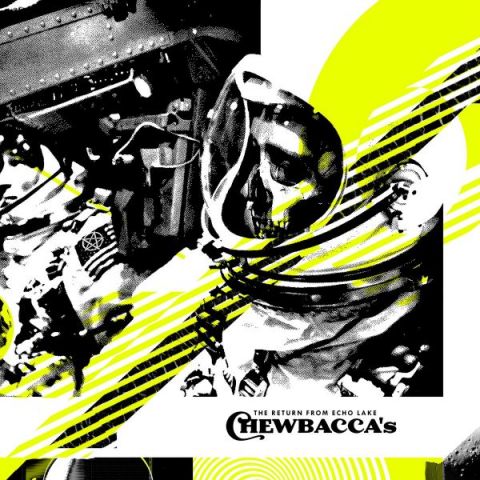 Chewbacca’s have released two great Astro-Man styled records back in 2002, resurfaced with a great split LP with Espectroplasma in 2012, and that’s it until now with this full LP on Sharawaji Records.

The Astro-influence remains strong with this group, adopting very similar guitar tones throughout and of course sprinkled with all sorts of sci-fi sound clips. The production is a little more cushy than their previous releases, with more bass and guitar not quite as... END_OF_DOCUMENT_TOKEN_TO_BE_REPLACED