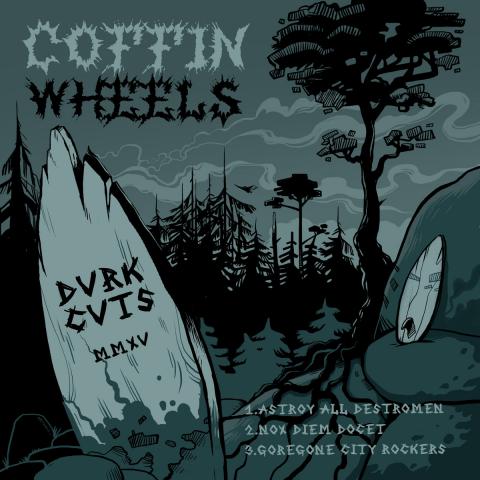 In time for Halloween, The Coffin Wheels have given us three dark n' dirty instrumentals. "Astroy all Destromen" is the fastest, followed by two creepier ones. Good horror surf with some punchy metal-styled drumming. You can stream it on bandcamp, but perplexingly you'll have to shell out $10 for this 3-song EP: more than their LPs! EDIT: Much more devilish price now 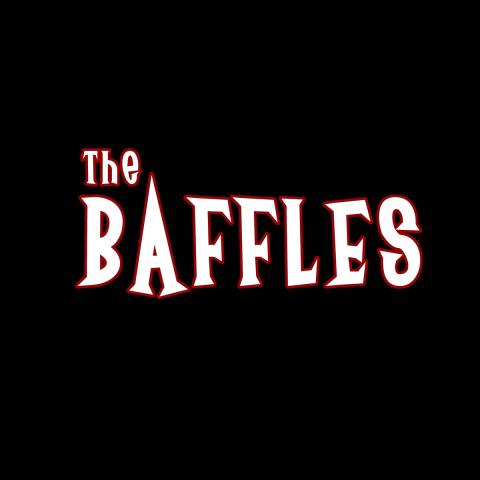 I should have realized that the reason I hadn't seen many surf releases recently was because they were being saved up for October 31st. Though The Baffles weren't really a horror-surf band on their last album, this release is largely comprised of covers of popular horror themes. Some of them are pretty familiar to the surf world (The Munsters, Fear (One Step Beyond)) but I don't think I've seen covers of Beetlejuice, Scorpio's Theme or the Exorcist Theme. ... END_OF_DOCUMENT_TOKEN_TO_BE_REPLACED 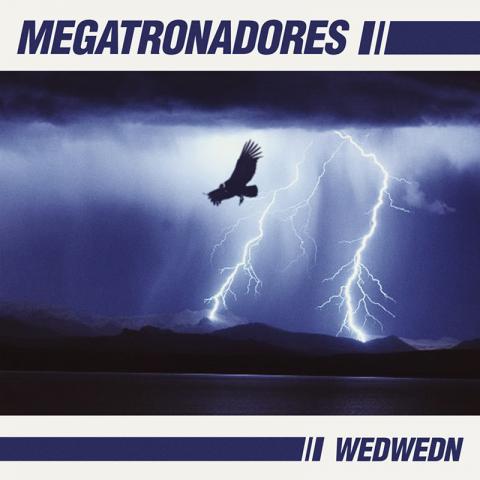 I can't find much on Megatronadores outside this bandcamp page - no facebook, website, twitter -  but this looks like their first release and they have my attention! The opening track "Volcanica" is a great trad surf number with a nice and wet guitar tone and a great sense of danger ramped up by a swirling organ in the background. But then on "El Cuero" they start to get a bit more brave, constantly switching the tones of their instruments: surf to fuzz, keyboard to 80's synth,... END_OF_DOCUMENT_TOKEN_TO_BE_REPLACED 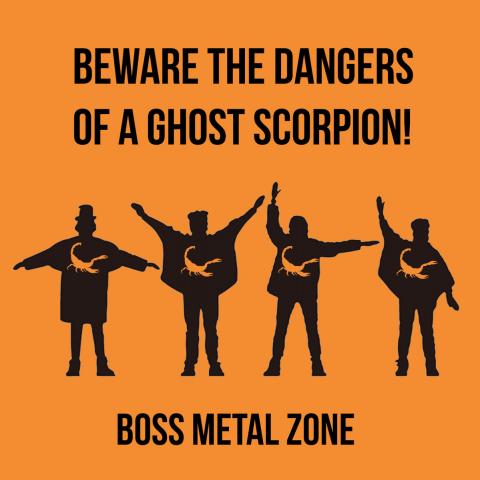 I was just thinking about how Ghost Scorpion were falling behind their pattern of one release per year. "Boss Metal Zone" is pretty recognizably Ghost Scorpion material: lo-fi, ragged guitar at a pretty quick tempo. They do it well and they do it here as well as they ever have. "Straight to Darkness" is probably the highlight for me, but by such a narrow margin it might be overtaken with more listens.

Speaking of listens, you should listen! It's pay-what-you-want... END_OF_DOCUMENT_TOKEN_TO_BE_REPLACED 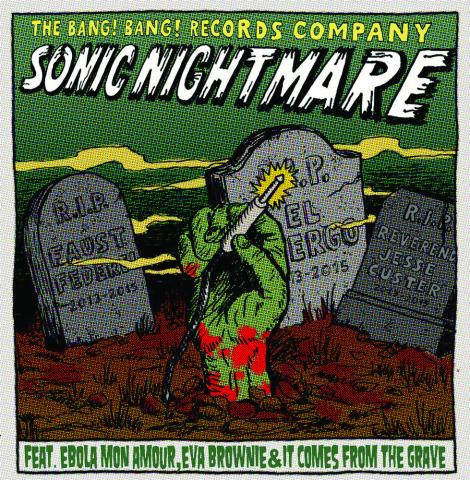 Reading their facebook page, I'm having a hard time telling whether this is a farewell EP or if Sonic Nightmare is merely saying they're dead for the purposes of a Halloween EP. Either way, I do have things left unsaid: I never made a release notice for their split EP earlier this year. This is predictably some creepin' horror... END_OF_DOCUMENT_TOKEN_TO_BE_REPLACED 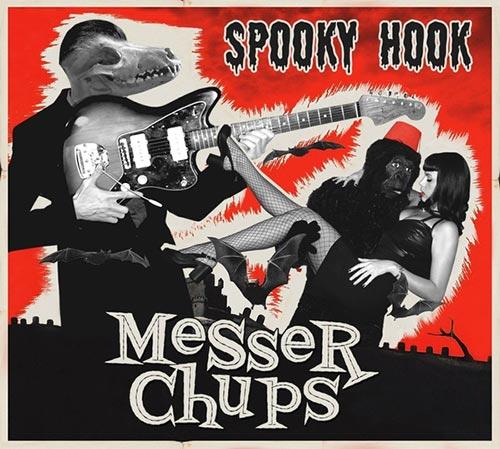 This is the second Messer Chups LP this year and much like The Incredible Crocotiger it's been hard to find. They made a post on facebook saying it's out and didn't respond to the masses asking "where?".

I have a policy of not posting about a new release unless I can tell you where to get it, and it looks like it's... END_OF_DOCUMENT_TOKEN_TO_BE_REPLACED 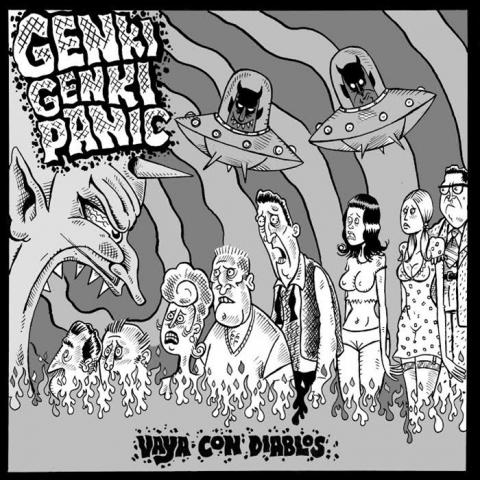 Genki Genki Panic may have already released an LP this year, but managed to squeeze in another small spooky one before Halloween. Two of these are covers: White Zombie's "Soul Crusher" and a Misfits cover (always appreciate another misfits cover) in "Return of the Fly". The title track "Vaya Con Diablos" is actually a creeping vocal track.

This one's a free download. They do have CDs for sale for a cheap $5. Release date says October 31st but CDs ship Oct 23rd. Yes, that's how you do... END_OF_DOCUMENT_TOKEN_TO_BE_REPLACED 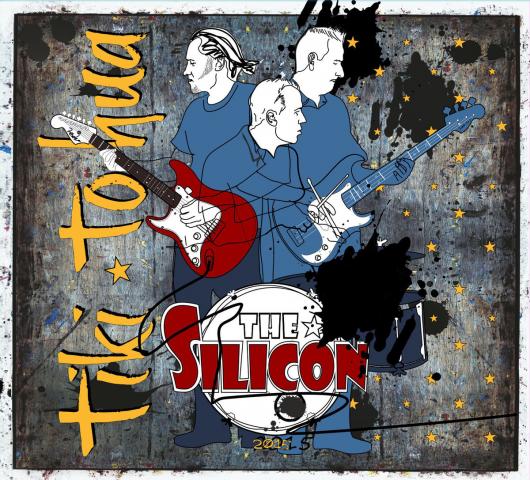 This is the second LP from The Silicon, and it covers a lot of ground. There's some shredders like "Mysterious Island" and the title track "Tiki Tohoa", and some western tracks like "Road to the Ranch", and I pick up a lot of rautalanka and shadows influence on others. They bill themselves on bandcamp as post-Soviet surf-rock and I can't help but think of the Surfbeat Behind the Iron Curtain compilations. Maybe they should feature on a modern equivalent of that!... END_OF_DOCUMENT_TOKEN_TO_BE_REPLACED 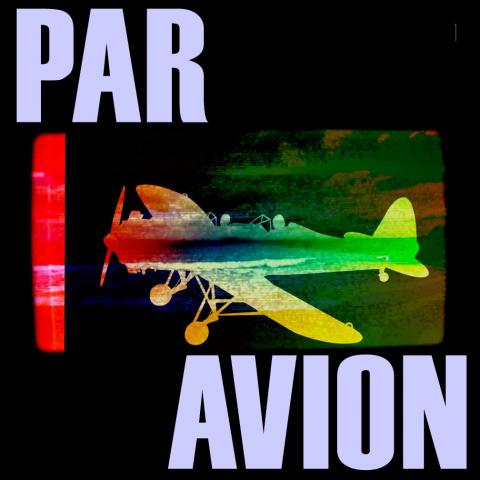 Par Avion clearly love the surf sound, but don't let it get in the way when they have other ideas. "Unchained Melody" has a great Duane Eddy meets modern-surf twang to it and sets the tone well for the rest of the album. But then the song "Par Avion" has a less motivated, more post-punk melancholy to it. Then the next song features a cello, the next one has a great orchestral spaghetti western sound to it, but then there's a pretty straightforward cover of Misirlou.

The Surfaders release A Greater Silence 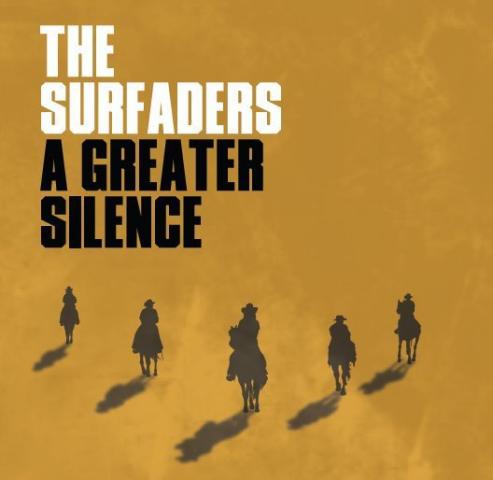 I love it when a new release slides into my hands during my radio show. Without more than 3 seconds of screening beforehand, I hit play on "North Bank of Lost River", which starts with an envigorating swell... then loud prominent vocals. It's an instrumental radio show, so I jumped a bit, but I was actually pretty durn excited about the instrumental underneath. When I got a change to listen to the entire thing, I found that the majority of the tracks were still instrumental, and a great... END_OF_DOCUMENT_TOKEN_TO_BE_REPLACED 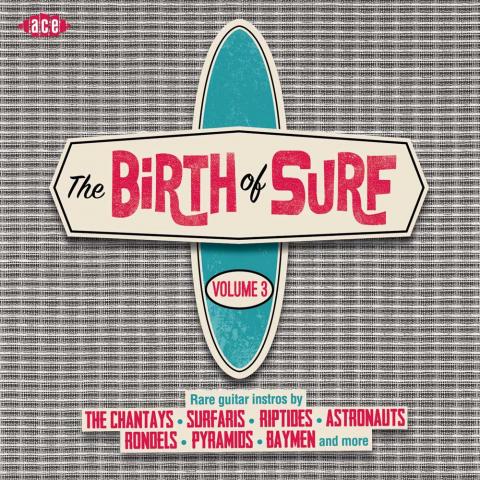 Ace Records continues their "Birth of Surf" series with a brand new Volume 3, curated by Alan Taylor and Dave Burke of Pipeline Magazine. Like the others, it's a total mix of basic-level surf songs to nearly unheard-of rarities. I'm pleased to see Johnny and the Hurricanes' "Sheba" on there - pretty common if you're digging for 45s, rarely finds its way to compilations,... END_OF_DOCUMENT_TOKEN_TO_BE_REPLACED 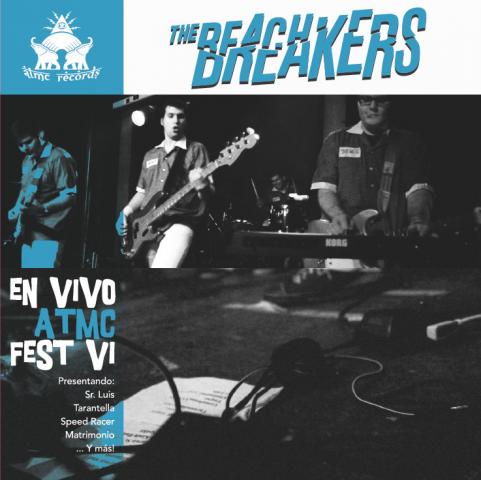 A live album from the band that I can't help but think of as "that band with the boobs on the album cover". Great trad sound, really sunny and fun and well-played, with a few sound clips thrown on in-between songs. It definitely does sound live, but that really only becomes a factor on the few vocal songs, where the vocals dwarf the instrumental mix... END_OF_DOCUMENT_TOKEN_TO_BE_REPLACED 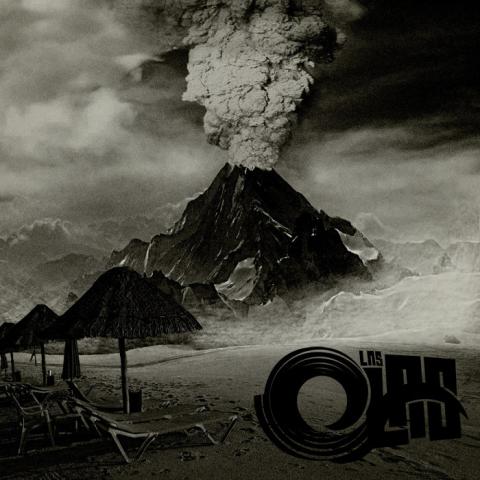 Las Olas may have a mostly trad sound to them, but they're not exactly going for a sunny SoCal vibe. Like the ashy cover art suggests, this is some dark, hopeless surf. Not necessarily slow and dreary - there are some frantic songs like "violeta", but definitely not smiling at you.

You can stream it on bandcamp, or just download it for free! 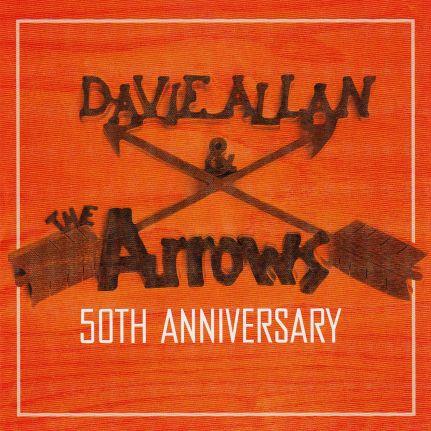 It's been 50 years since Apache '65, the first LP by the Arrows, and Davie Allan has released TWO albums to commemorate this. He explained this in the interview I did with him the other day: he was working on the 50th Anniversary album and was worried that the people at Curb records were taking too long to clear the... END_OF_DOCUMENT_TOKEN_TO_BE_REPLACED 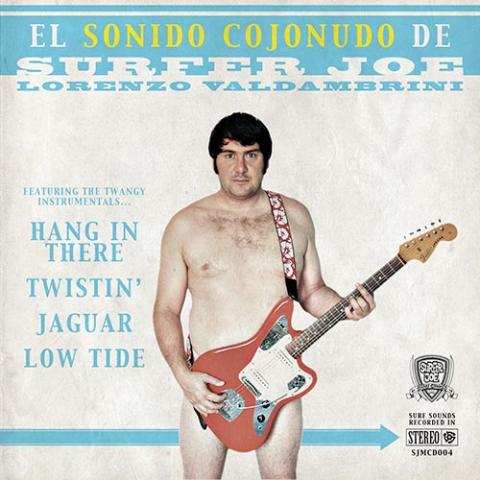 From what I'm gathering, "Cojonudo" translates to "ballsy", which I think explains the near-nude cover of this record. I say near-nude not because of the guitar, but because I think I spy the strap of his tighty-whities at his hip. Then I realized I was looking at this way too hard.

Anyway, if you're not familiar with Surfer Joe, he's the hardworking surf entrepeneur behind Surfer Joe... END_OF_DOCUMENT_TOKEN_TO_BE_REPLACED 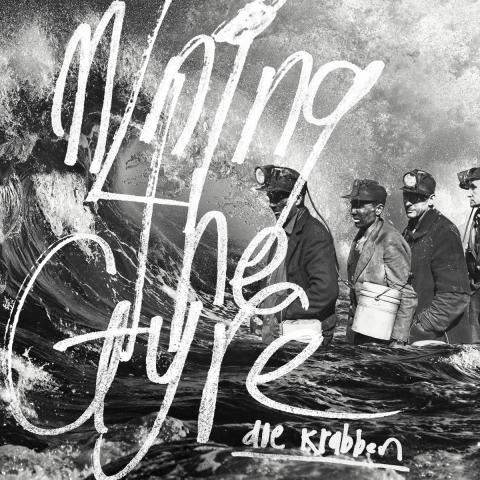 I was a big fan of Die Krabben's Welcome to Surf Trash Island released last year, even giving it a Gremmy honorable mention. Mining the Gyre has the same weirdo creepy surf-meets-Beefheart thing going on, with a few good instrumentals, a few essentially surf songs with a deep trollish voice grumbling... END_OF_DOCUMENT_TOKEN_TO_BE_REPLACED

Luau or Die release Dead on the Floor Vol. 2 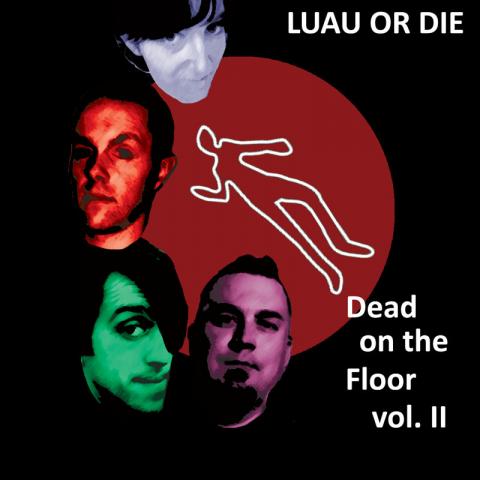 After 8 years as a band without so much of an EP to their name, Luau or Die went ahead and made TWO EPs in 2015, almost entirely originals. It's fun, adventurous, and has a good helping of swagger to it. Give it a list, and while you're at it you can check out Vol. 1 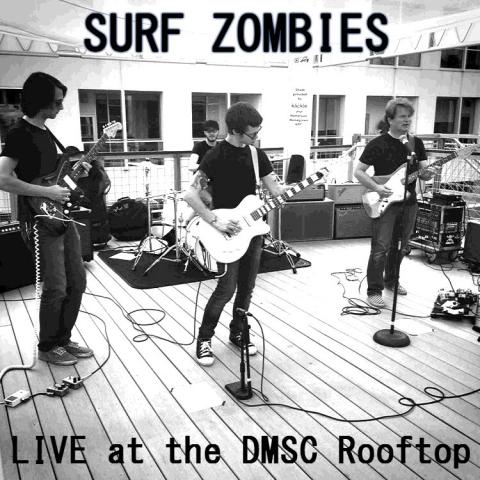 Iowa's biggest surf act (probably by default, but by merit too) just dropped a nice live record. The sound is clean, better than plenty of studio albums I've heard. The songs seem to be all over the back catalog, a great place to start if this is your first introduction to the Surf Zombies.

The digital download is nice and cheap, but they've also got a CD that you can buy. 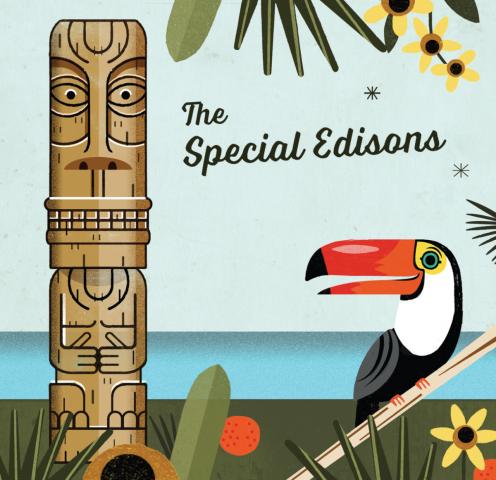 Before we do anything here, I'd like to recognize The Special Edisons for calling an 8-song album an EP. I feel like 8 songs is becoming the norm for an album this year, and they're acknowledging that that's short!

The Special Edisons (not a typo) hail from Calgary, which is funny because the first thing that came to mind was Huevos Rancheros. No shared members, I checked, they're a 3-piece with a ragged, dry, and distorted guitar tone. It's rough and tumble ranch rock, and there's... END_OF_DOCUMENT_TOKEN_TO_BE_REPLACED 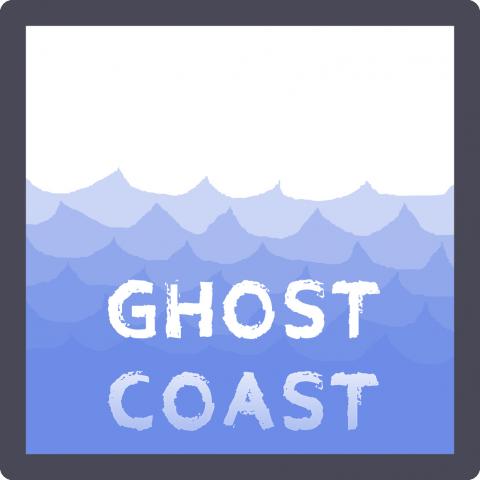 At this point I've been doing this radio show in New Orleans for about 5 years, and in that time very few listeners have come to the obvious conclusion that they should start a surf band. So I was overcharged with excitement when I was shown a youtube video from a frequent listener of their new band Ghost Coast. A few days later, there's even a demo up on bandcamp!

Ghost Coast is a 5-piece (2 guitars, bass, keys and drums) and their sound is definitely surf, but on the pretty side,... END_OF_DOCUMENT_TOKEN_TO_BE_REPLACED