Les Robots - The Fascinating World Of... 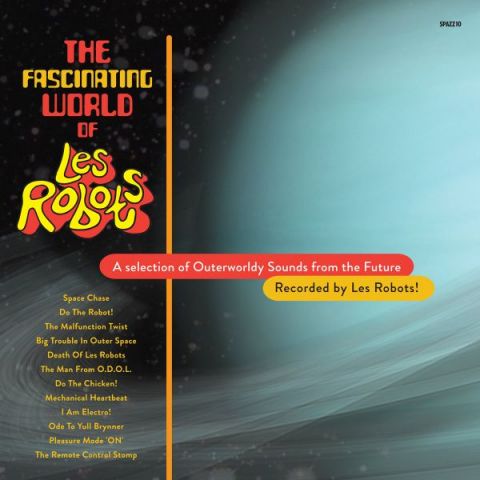 The initial few EPs from Les Robots were immediately exciting: they were bar-none the best modern Joe Meek sound-alike that I'd heard. Thankfully, they didn't keep us waiting for long to hear a full-length, and I think it delivers on the promise of those EPs.

A big part of the reason I invoke Meek here is the prominent clavioline, a signature ingredient of the sound of The Tornados, The Moontrekkers and the like. That electric honk is so weird and strange, and yet very... END_OF_DOCUMENT_TOKEN_TO_BE_REPLACED 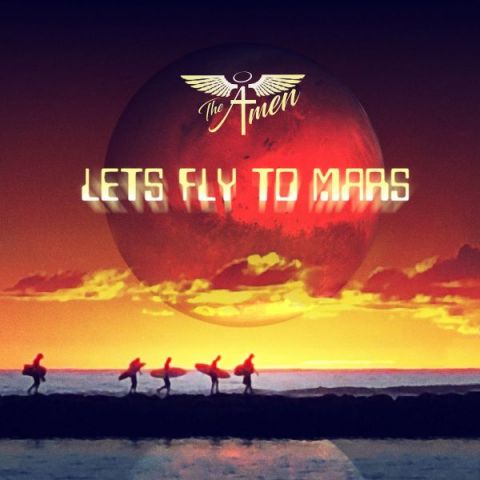 Let's Fly to Mars is a high-profile, long-term, cross-continental collaboration between Jeremy DeHart known primarily from The Aqualads, El Firetone from El Ray, Dr. Boris  from Messer Chups, and Dane Carter from The Madeira. Jeremy lays out the story in detail in... END_OF_DOCUMENT_TOKEN_TO_BE_REPLACED 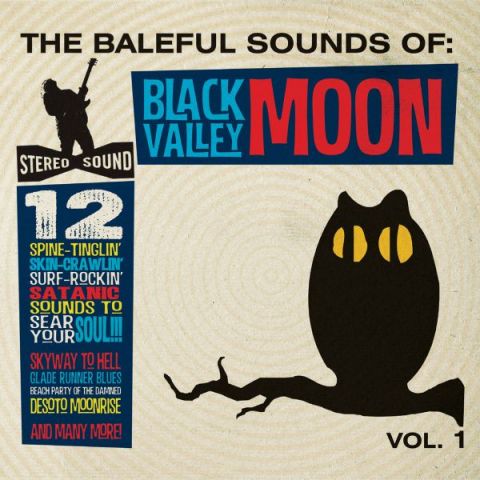 The Sharawaji Records roster has been growing steadily and adding more high-profile releases. They recently grabbed some attention for the upcoming Chewbacca’s record, but meanwhile this little gem snuck under the radar. Black Valley Moon features the guitarist from Epitaph punk band Down By Law, but they do a great job of carving out a unique surf that feels accomplished and comfortable within the genre.

The one funny thing here is that their bark is definitely worse than their bite... END_OF_DOCUMENT_TOKEN_TO_BE_REPLACED 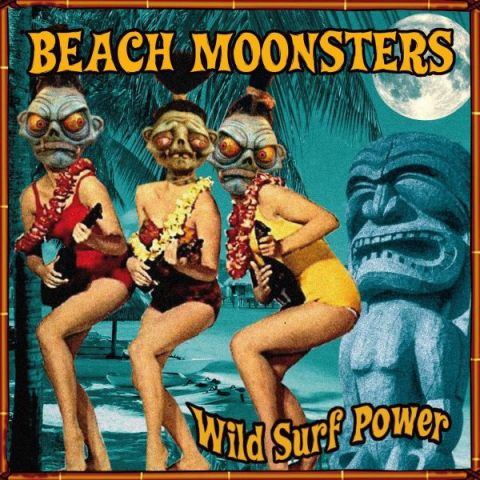 I don’t know much about French surf power trio Beach Moonsters but they quickly had me thinking of another prominent French group: Hawaii Samurai. They’re tastefully clipped to sound loud, play fast, and generally keep it pretty stupid and fun. There’s one slower one “Before the Death of the Gringo”, but it’s by no means any softer. It’s hard to find much to say here, if power surf is your thing, I think your interest will be piqued. 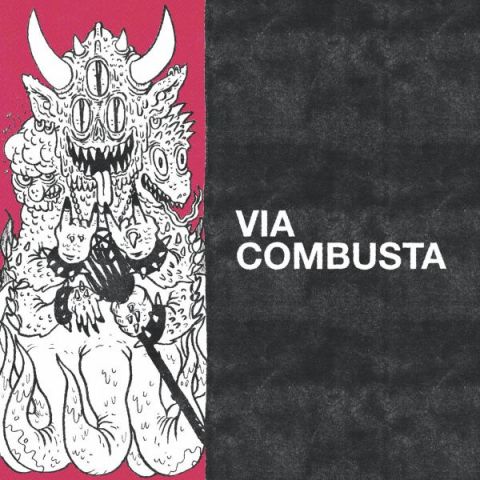 Recently the surf radio show Heads Up! with Carmen Ghia put on a monster 11-band showcase of Seattle's surf/instro groups. On that roster was a band called Via Combusta, who have been playing Seattle surf shows for a while but seem largely unknown outside their home turf (and was certainly unknown to me). This 7" was slated for a release this fall, but waddaya know, they were ready to go earlier than expected, which is seemingly never the case these days. I think they deserve a... END_OF_DOCUMENT_TOKEN_TO_BE_REPLACED 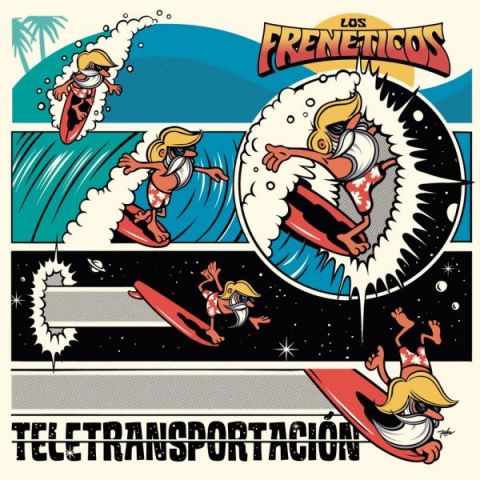 In 2015 Los Freneticos’ album El Sonido Que Perdura was anointed with my Gremmy award for best Trad Surf record of the year (man, I was playing fast and loose with the word "trad" then...). It’s a record that bursts with energy, exuberance and playfulness. Teletransportacion is the follow-up to that record, and though... END_OF_DOCUMENT_TOKEN_TO_BE_REPLACED

Amphibian Man - Shapes (Side A) 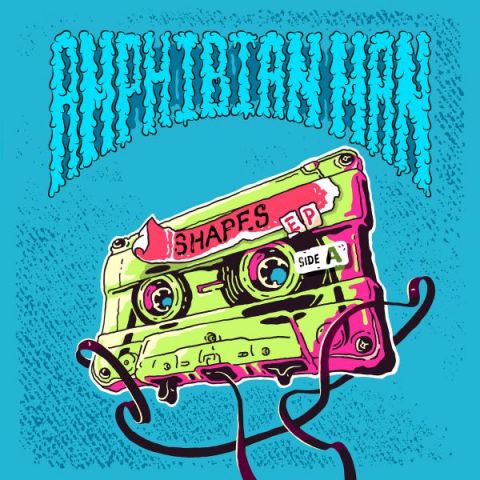 3 releases in less than a year, perhaps Amphibian Man is getting back to his previous furious pace. Though Metal Goes Surf went back to slapping some reverb on that guitar, these 7 songs are about as dry and punk-sounding as they've ever been, to the point where I'd consider this instro-punk instead of instro-surf.

But for fans of Amphibian... END_OF_DOCUMENT_TOKEN_TO_BE_REPLACED 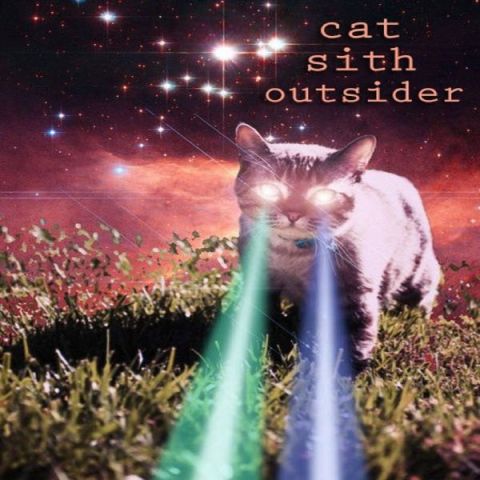 Cat Sith (or Catsith, they never seem to settle on that) have released 3 EPs and 2 LPs since April of 2018, and every subsequent release gets a little more poisoned.

Their sound definitely is rooted in surf, reverbed out guitar and all, drums, upright bass and often saxophone or even some bongos. But they're getting better and better at using them tastefully wrong. The reverb rings out a bit longer than comfortable levels, and there might even be some very subtle... END_OF_DOCUMENT_TOKEN_TO_BE_REPLACED 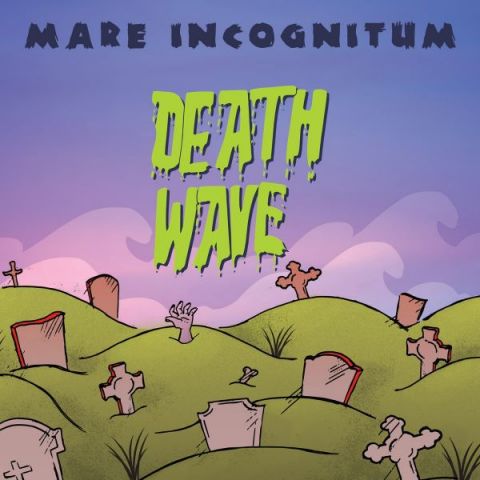 Despite hearing their first EP, something about this led me to believe that it would be fast-n-nasty metal-tinged surf, but Mare Incognitum actually adopts a pretty normal modern surf sound at a normal pace, just dwelling a bit more on the darker side. That's no complaint though, each of these is punchy and fun, almost always danceable, and with a good sense of when to go big, when to sound a little nastier, and generally how to stay interesting and fun. 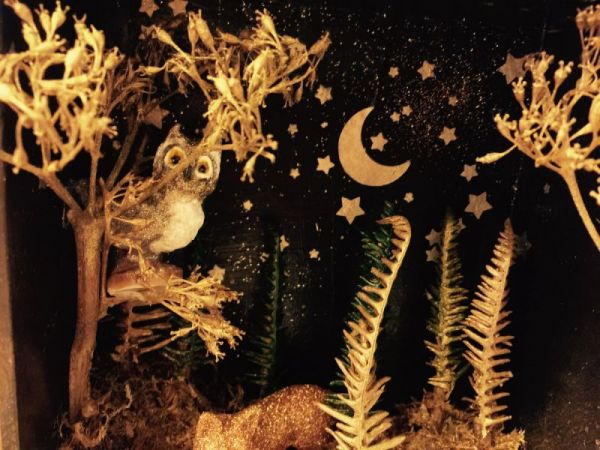 I've often seen talk of drum machines in surf but it usually seems like a solution for bedroom composing and the inability to form a band. I gotta say that most of the music I've heard with them is... eh. But there are some bands that have fused surf with synth and drum machines very well, such as earlier Messer Chups and Matorralman. Galactic Gold sounds like neither and pulls it off well.

I think the success lies in the... END_OF_DOCUMENT_TOKEN_TO_BE_REPLACED 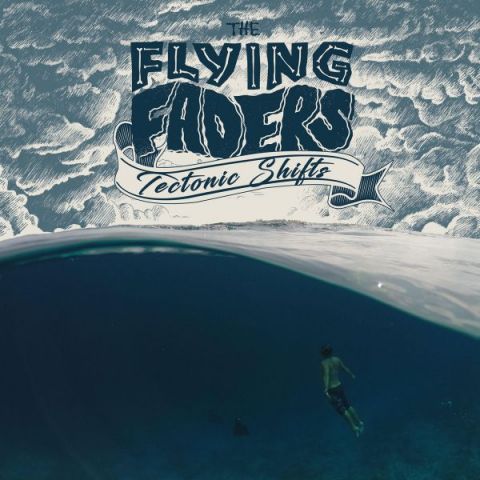 Chad Shivers (organizer of the Southern Surf Stomp, plays in The Mystery Men?, KBK, plenty of others bands) champions The Flying Faders’ debut album No Sweat as one of the best surf albums of the past 10 years. I like it, but it never quite grabbed me enough. I couldn’t tell you why, and I can’t tell you why their new LP seems to fix whatever it was. Tectonic Shifts is a great album.

The New Shaker Sex Addicts - We're In This Together EP 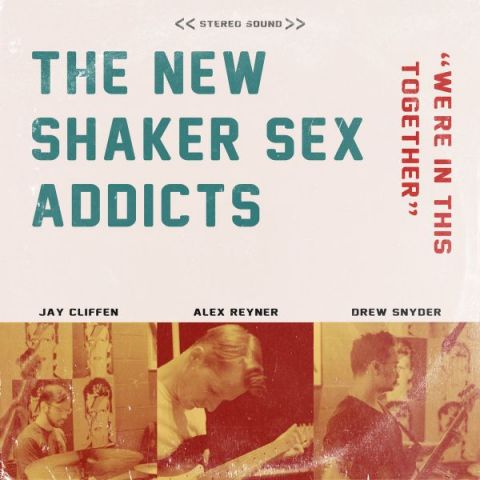 The over-the-the top party feeling that you get from a band name that seemingly promises you both sex and (presumably) butt-shaking feels kind of ironically imposed when you actually listen to this album. It’s not sad or particularly listless or anything, it’s totally danceable, but there’s a sour and strange feeling to this. My first thought was a sort of vaporwave via surf, but I think something closer would be a Twin Peaks comparison. Not so much directly to Angelo Badalamenti,... END_OF_DOCUMENT_TOKEN_TO_BE_REPLACED 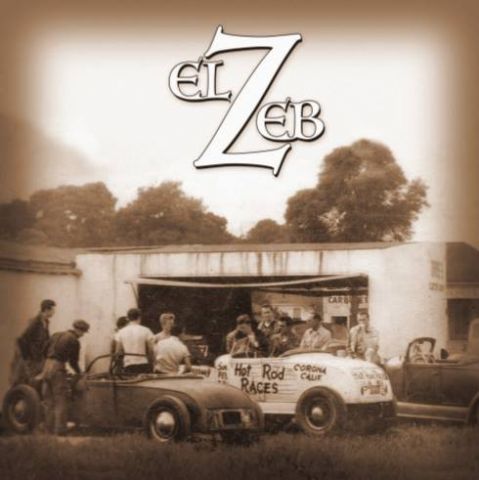 This is a band that’s straight-ahead with their delivery, so I’ll do the same: El Zeb nail it.

There’s no special sauce to El Zeb -- in terms of pure sound they could be mistaken for any of thousands of surf groups. They don’t need it because they have the personnel: Sebastien Fevry of Los Venturas, Sam Bolle probably best known as Dick Dale’s touring bassist, and Dusty Watson whose drumming resume includes so much surf & garage royalty that we’ll just settle and... END_OF_DOCUMENT_TOKEN_TO_BE_REPLACED 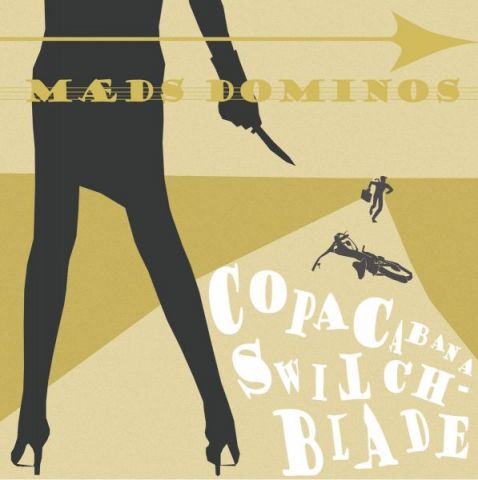 A lot of bands reach for that spy sound, and while some try to get there via mimicry of John Barry, the real key isn’t in what you’re twangin’ but what you’re bangin’. Maeds Dominos sometimes have the snare restricted to surbeat, but you can expect it to be joined by bongos, glockenspiel (?), tambourine… it’s extremely well done and expands the whole feeling of the songs beyond mere guitar aggression.

But if you’re a... END_OF_DOCUMENT_TOKEN_TO_BE_REPLACED 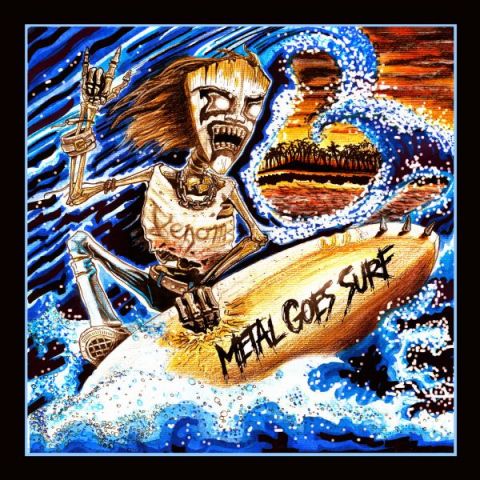 Of all the different directions that Amphibian Man has taken, this was the easiest to see coming. Shortly after releasing No Surfers In My Town, Amphibian Man started posting videos of surf versions of metal... END_OF_DOCUMENT_TOKEN_TO_BE_REPLACED 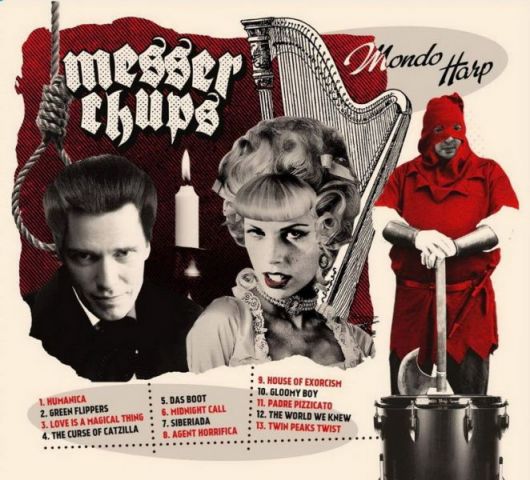 Y’all, I do my best to stay on top of this stuff, so I felt like a chump when I walked up to the merch table at our local Messer Chups show to find an album I’d never seen before. Their new one no less! To be fair, Mondo Harp has been strangely under the radar, with barely any mention on facebook and not yet having made its way to bandcamp or even Amazon. The opening track “Humanica” has a video available but it’s promoting the tour, not the album.... END_OF_DOCUMENT_TOKEN_TO_BE_REPLACED 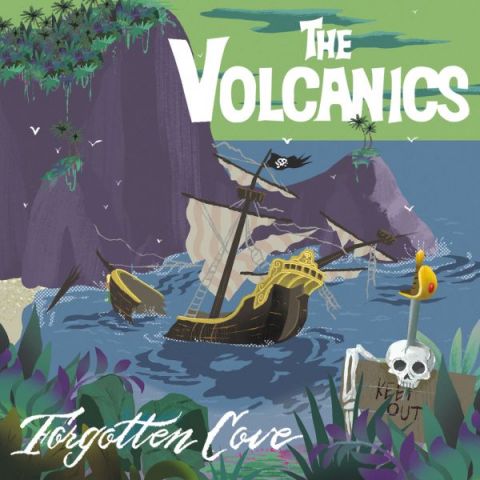 I’ve been looking forward to this album for a good while now, especially since I saw the artwork way back at SG101 last year. Though the album cover evokes a bit more narrative and intrigue than anything they’ve had previously, it wasn’t the draw of something new that attracted me – it was the promise of what The Volcanics always provide.

What I like about The Volcanics is that despite sounding as a trad group should, their dogma to the genre isn... END_OF_DOCUMENT_TOKEN_TO_BE_REPLACED 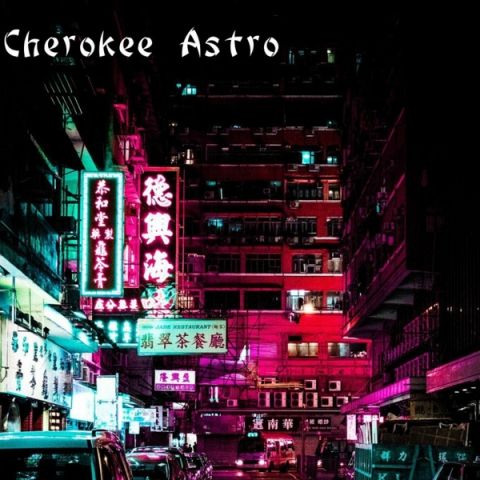 The opening track “Song of the Samurai” establishes the vital statistics of this band: speed, guitar pyrotechnics -- stuff I like but not necessarily standout features. Good song, but there’s more to this band. Cherokee Astro generate a good momentum but also a good... END_OF_DOCUMENT_TOKEN_TO_BE_REPLACED

Moms I'd Like to Surf - Beach Control to Major Knob 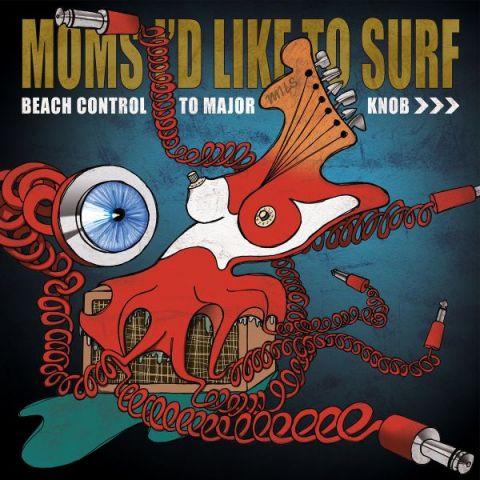 The surf band with perhaps the most uncomfortable name since Bambi Molesters have finally released their first full-length, and that mindset of pushing out of the comfort zone is all over this thing. However, this isn’t achieved by merely adding a theremin or doing a spaghetti western song; it’s with unexpected syncopation, different guitar tones, subtle effects and instrumentation. Not only is the band trying new things, but the listener is challenged as well. And most importantly... END_OF_DOCUMENT_TOKEN_TO_BE_REPLACED 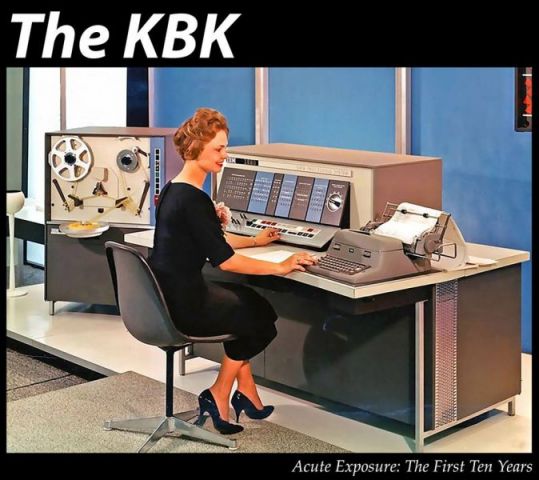 Man or Astro-man led the charge of a new b-movie punk branch of instrumental surf. That reach extended globally but their crash-landing in Alabama left a radioactive fallout that spawned instro bands within a small radius for years to come. Kill Baby Kill (now The KBK) came along much later, but spilled out of the same crater and stuck around long enough to make an impact on many of us. When I spoke to Chad Shivers, organizer of Southern Surf Stomp, member of the Mystery Men? and... END_OF_DOCUMENT_TOKEN_TO_BE_REPLACED