Part of what sold me on Surfer Joe was the symposiums. I like having a moment to talk and learn about topics inside or around surf music, and I watched a few of the ones that were posted online in years past. So I registered at VIP level (an extra $30 or whatever wasn’t much in the grand scheme of airfare and lodging) and headed over around noon.

The schedule was running a lil’ bit on the side of Italian time but the other perk of the VIP level, the brunch, was well worth it. This wasn’t the diner faire that you’d expect from Surfer Joe Diner (not that I would ever badmouth diner food) but really great cuisine that probably beat whatever cheap food I would have otherwise grabbed along the way. 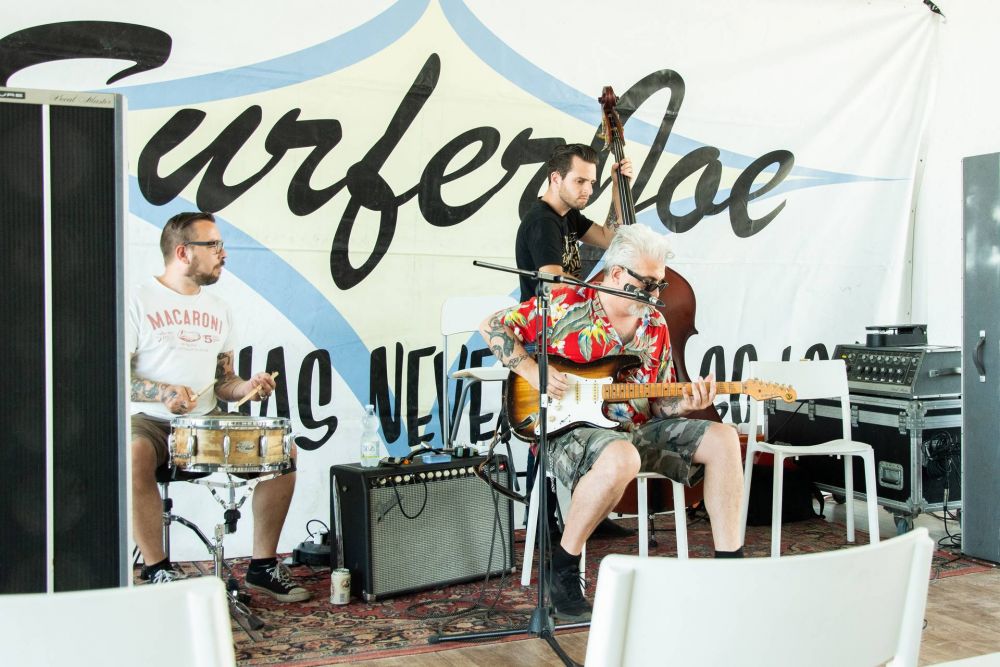 First symposium was Country & Rockabilly vs Surf hosted by Don Diego. Italian rockabilly virtuoso Don Diego walked us through some of the luminaries of rockabilly guitar via imitation. He gave you the basic bio, would play a song or an excerpt (backed up by upright bass and snare), and move on to the next one. Simple formula that worked really well and was really entertaining. His examples really highlighted the different styles, and his playing was exceptional -- precise but not clinical and soulless. I can’t say he really delved into the “versus surf” portion, but no matter, it was great. 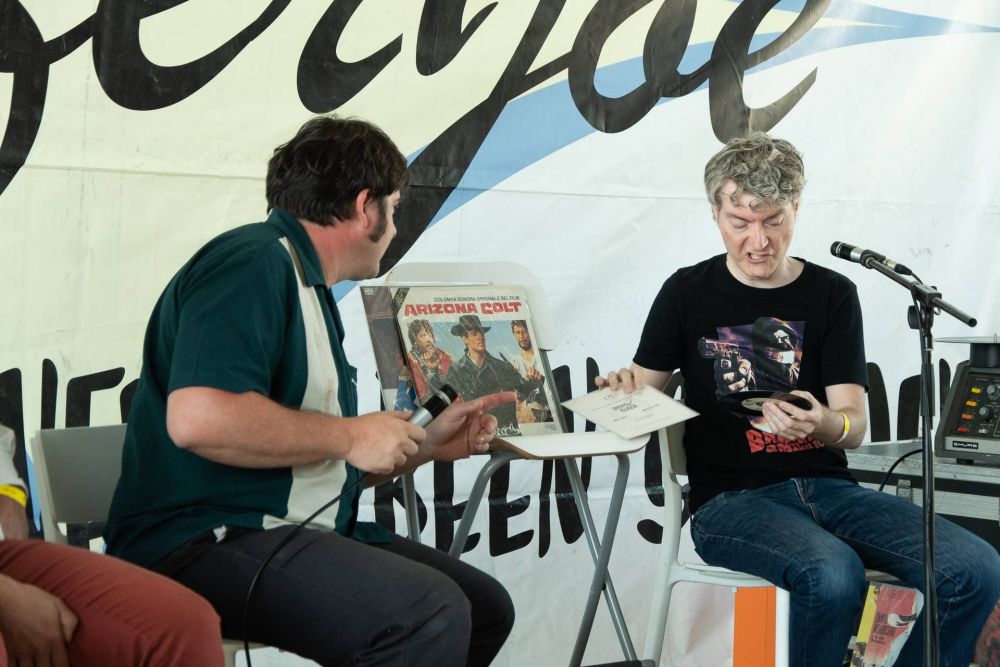 The second symposium was a crash course on the history of Spaghetti Western music, hosted by Fabio Meini (and translated by Lorenzo). This is a subject that I’m fascinated by, and I learned a lot. There was definitely a focus on Ennio Morricone (there would have to be) and it was nice to get a sense of a timeline of when these were being composed and under what conditions. He put on a lot of examples, all of them great though I wish they would have skipped some of the obvious ones to make room for ones we may not have heard (for instance, I don’t think we needed to hear “The Good, The Bad and The Ugly” though it certainly should be mentioned). Side note: I saw an ad when I flew into Pisa that the last stop of Ennio Morricone’s final performances was in nearly Lucca only a week after Surfer Joe. He was doing shows in Rome right about that time. I wish I’d have known beforehand, I might have scheduled this trip differently! 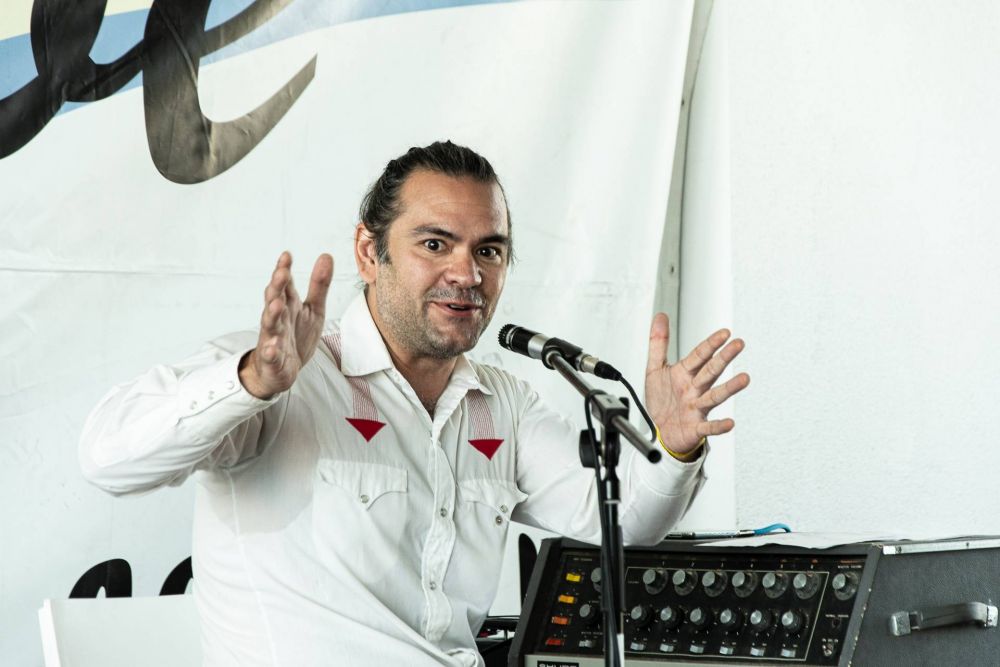 Last symposium was Eric Penna of Trabants talking about what he learned in creating his most recent Spaghetti Western album Nel Cuore Di Una Terra Selvaggia (In the Heart of a Savage Land). He also had a few examples of Spaghetti Western songs that inspired him, starting off with one of my favorites, Riz Ortolani’s “Day of Anger” and even brought my attention to Danger Mouse’s album Rome, which used the same studio and musicians as the Italian originals. He talked about the equipment and conditions these tracks were made in and his attempts to replicate them, including some in-depth comparisons of analog plate reverb vs digital reverb. Even though I’m not a musician and don’t intend to record anything soon, I thought it was super interesting to hear how to get to that signature sound. 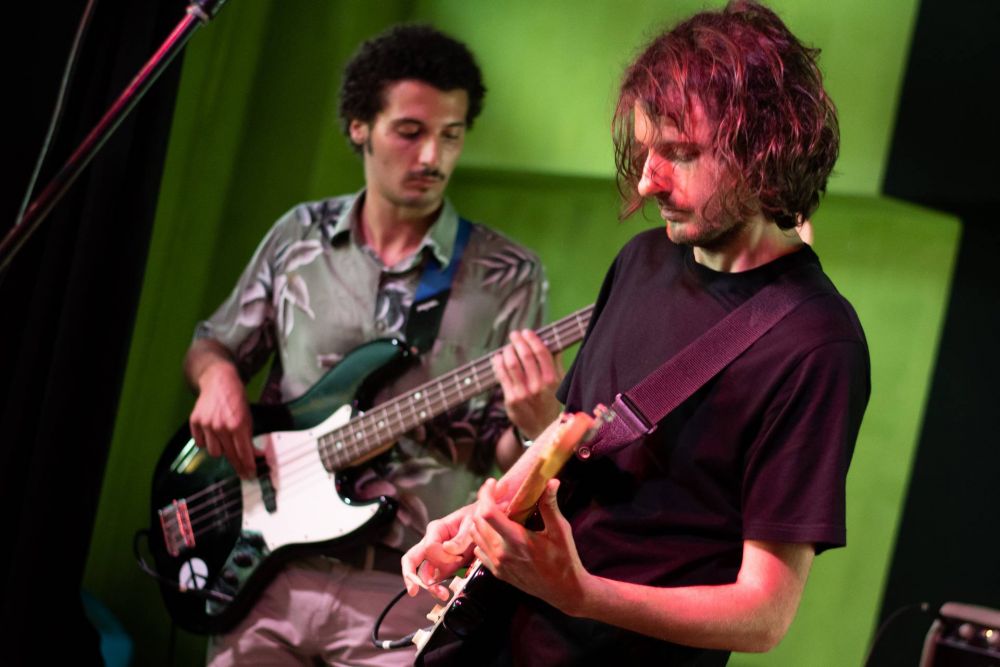 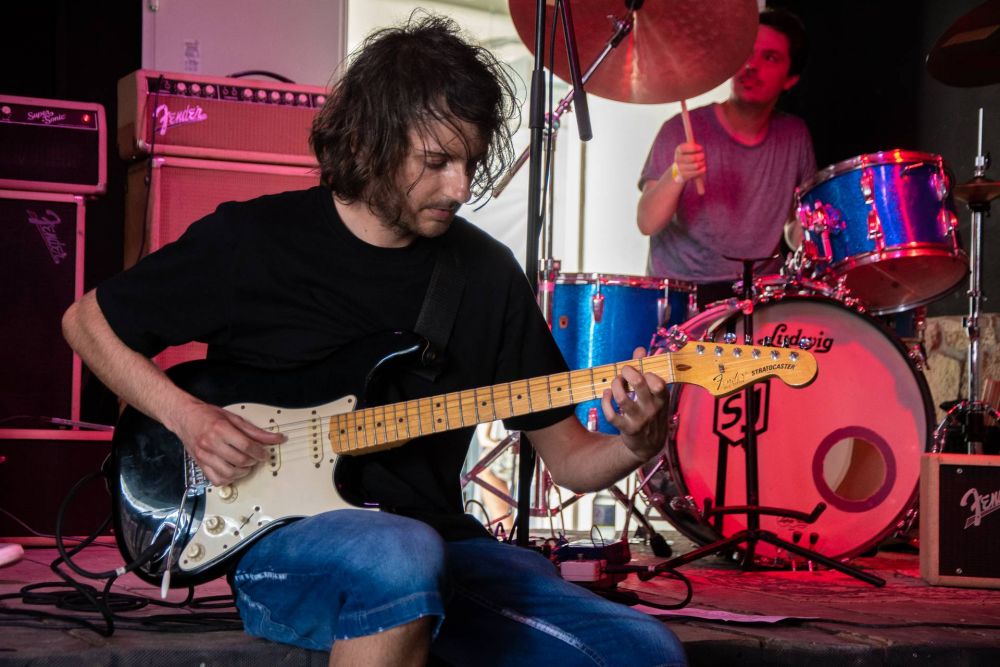 The first band was up in the tiki room and riding off the Spaghetti Western theme (that would continue throughout the day). Requel, a band unknown to me, were a cool Italian trio that did a good job of summoning that subtle Western sadness and somehow effectively merging it with a borderline funky rolling bassline. There were a few covers and originals, all of it pretty solid. 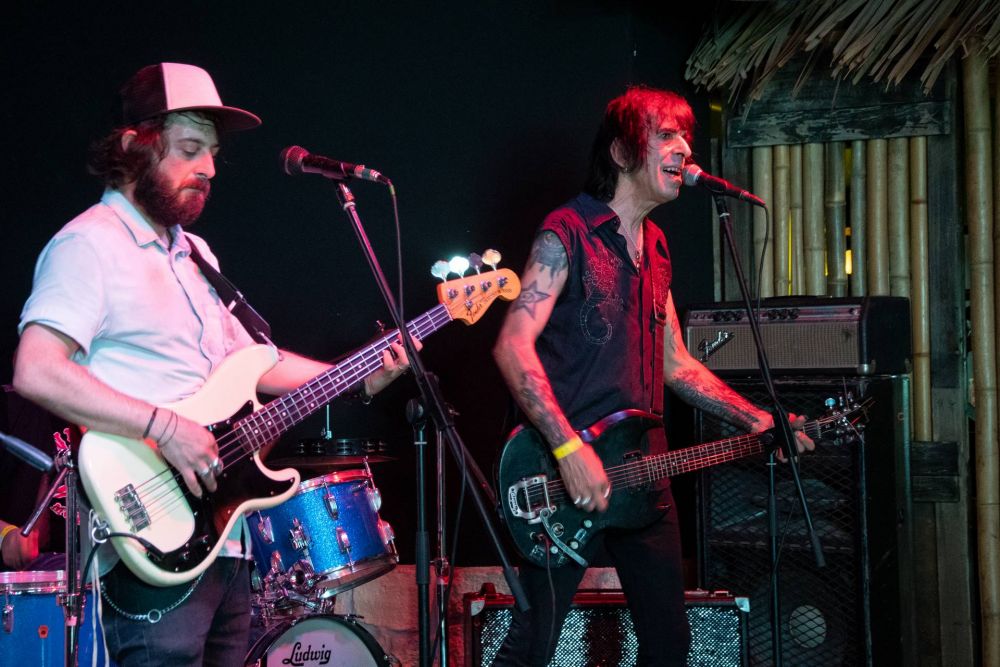 Next was another band that I hadn’t heard of, but they hold some clout in Italy. Dome La Muerte EXP had a few fun vocal garage tracks, but the Spaghetti Western instrumentals were fantastic. Charged up and full of energy, in the direction but not quite to the degree of Los Tiros. I thought the keyboard (played by Lorenzo’s brother!) was a great touch. The band leader Dome La Muerte, I would later find out, was guitarist in a lot of legendary Italian bands such as Not Moving, who were one of the first modern surf bands in Italy. I bought the album and it's excellent, and was also probably the only album from Surfer Joe that I saw in any of the record stores I visited. 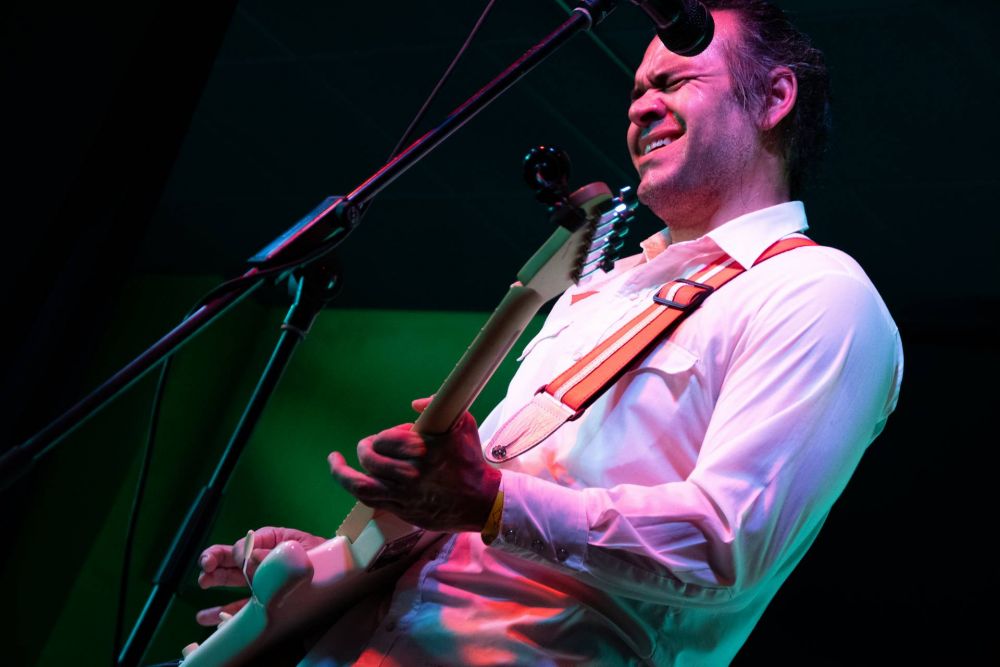 Next was Trabants, who I’d always wanted to see. Eric was joined by Jonpaul Balak and Lorenzo’s brother Luca Valdambrini. Predictably, the focus was on the newer Spaghetti Western material, but as a longtime fan, I was pleased that they started out with a few stompers from previous Trabants albums such as “Blackjack” off of Freakout. Obviously the western tracks were a little pared down from the album, but the melodies are of course the focus and that’s all they really needed. They seamlessly slipped back into psychedelic territory later in the set, which was a great way to round it out. 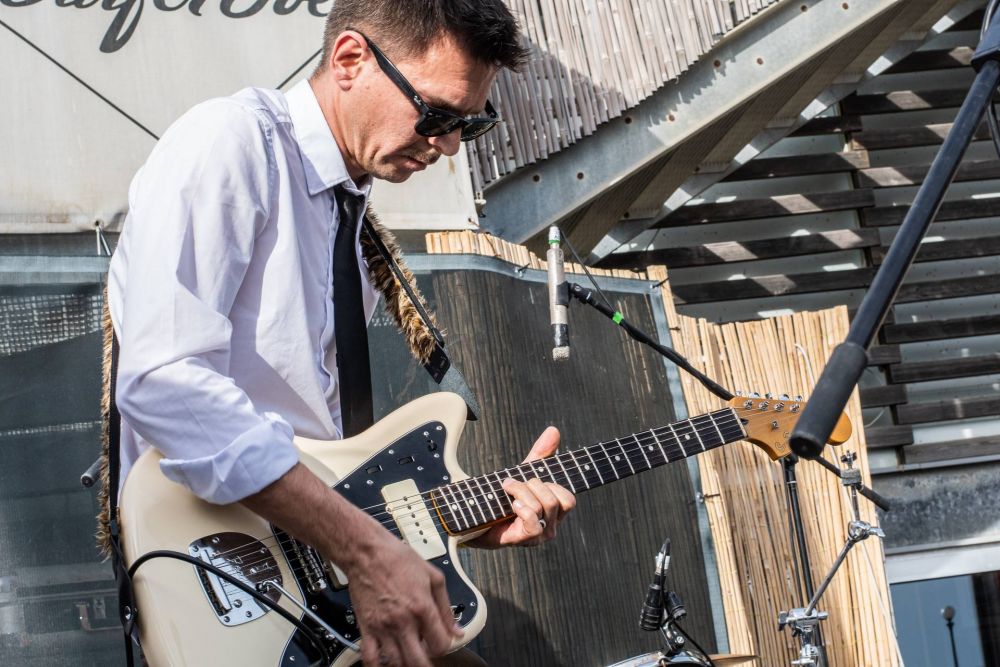 After the Trabants ended at roughly 6pm it was time to go outside! Topdrop, another Italian band new to me, was first. A trio with a pretty clean, trad sound doing almost entirely originals. Admittedly, I can’t really form a full opinion on them: I am a religious Pizza Friday observer, and I especially wasn’t going to skip church while I’m in Italy, so I chose this as my strategic opportunity. 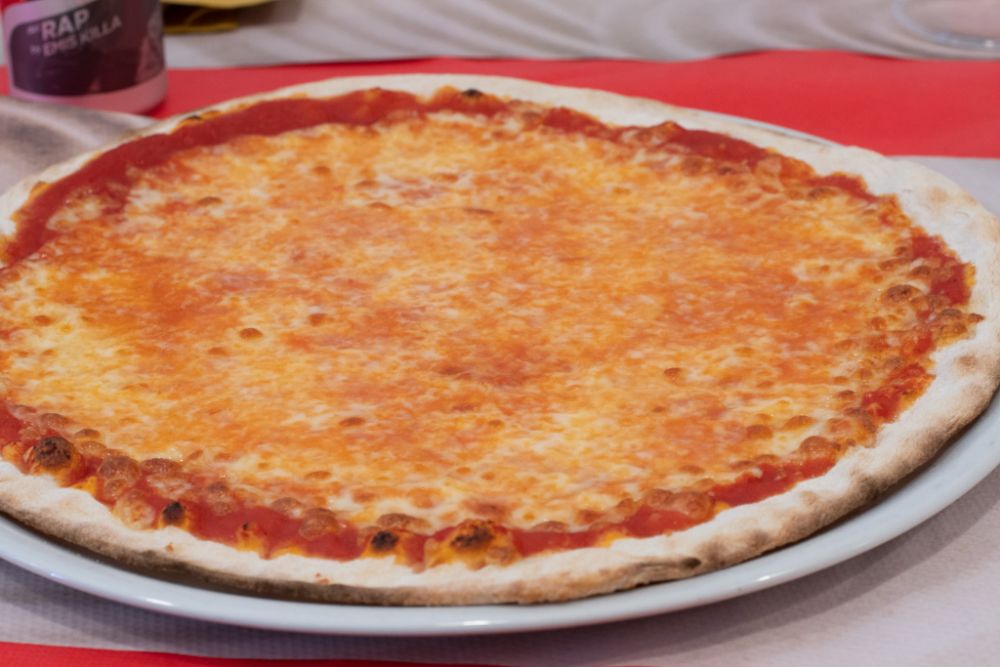 It was very tasty. 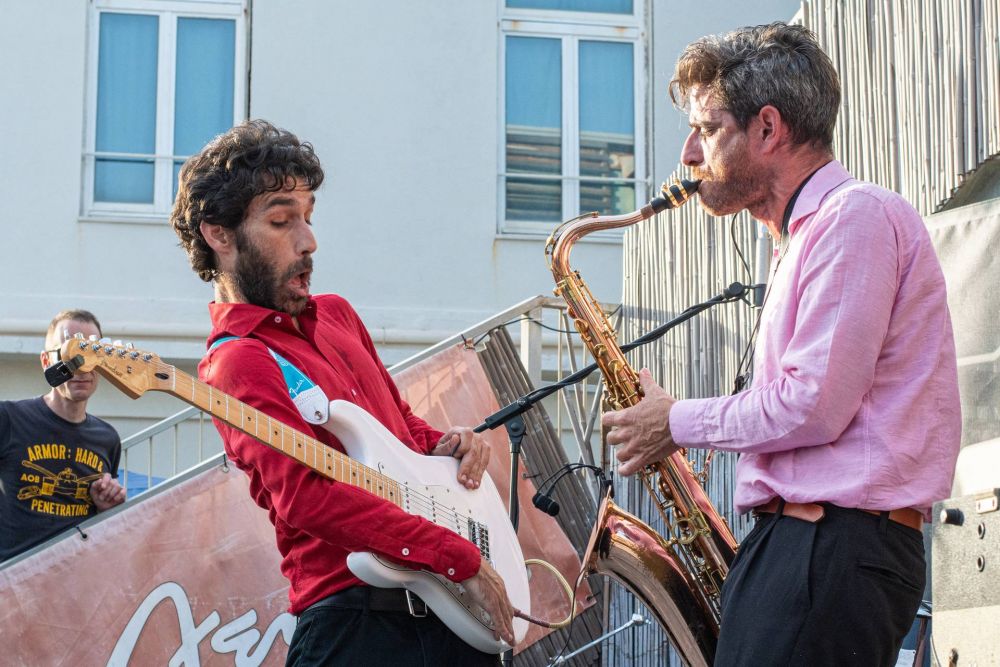 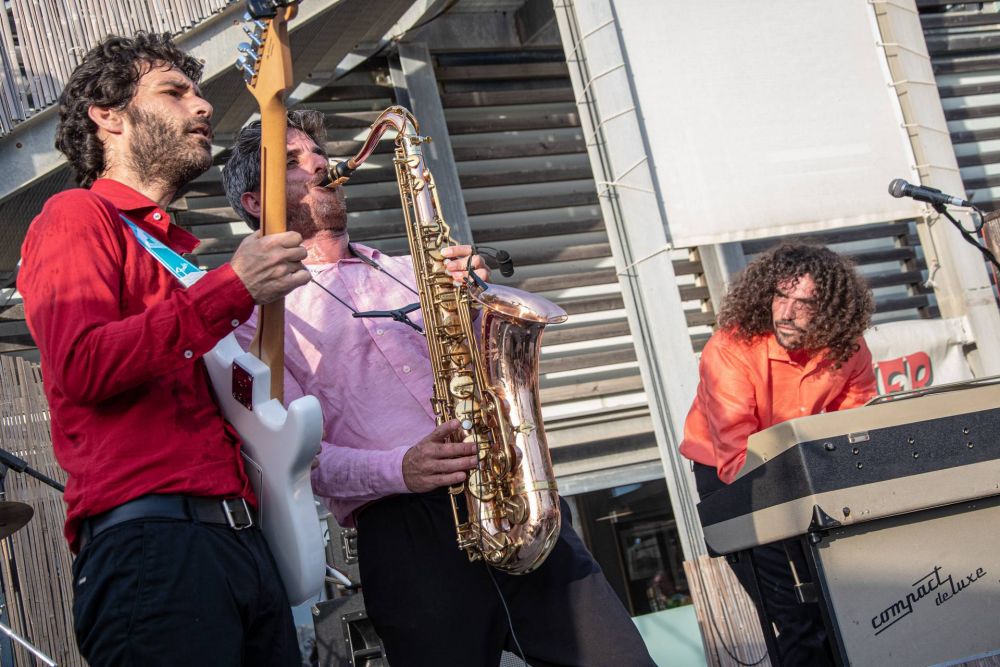 I came back probably two thirds of the way into the set of Tel Aviv’s RPS Surfers, a band whose album has been on my Bandcamp wish list for ages but I’ve never really given the attention they deserve. They were a blast to watch, very active on stage and clearly having fun. They were one of many bands that would contribute to the frequently made comment “there’s an awful lot of sax today” but I want to single out the keyboardist for rocking out on an instrument that’s challenging to make exciting. While what I heard was certainly good, the feedback I got from friends was that they were a highlight. To paraphrase Eric from the Trabants, there was a certain point where they tapped into a Klezmer-ish sound and that really made them stand out and sound interesting. 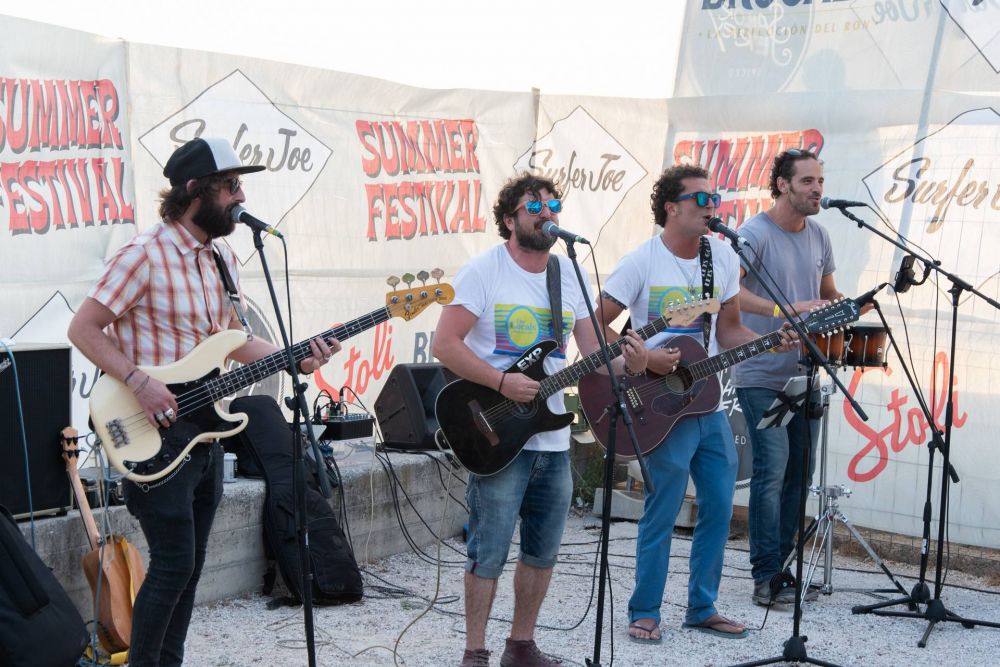 RIght about now was when The Sonoras were supposed to play, but air travel snafus kept them from making the show. As I type this my flight home has been delayed 23 hours, so I’m feeling their pain. In-between sets The Locals performed vocal covers, mostly Beach Boys in an area across from the stage. I walked to the sea and dipped my toes in the water while the sun began to set. It was nice. 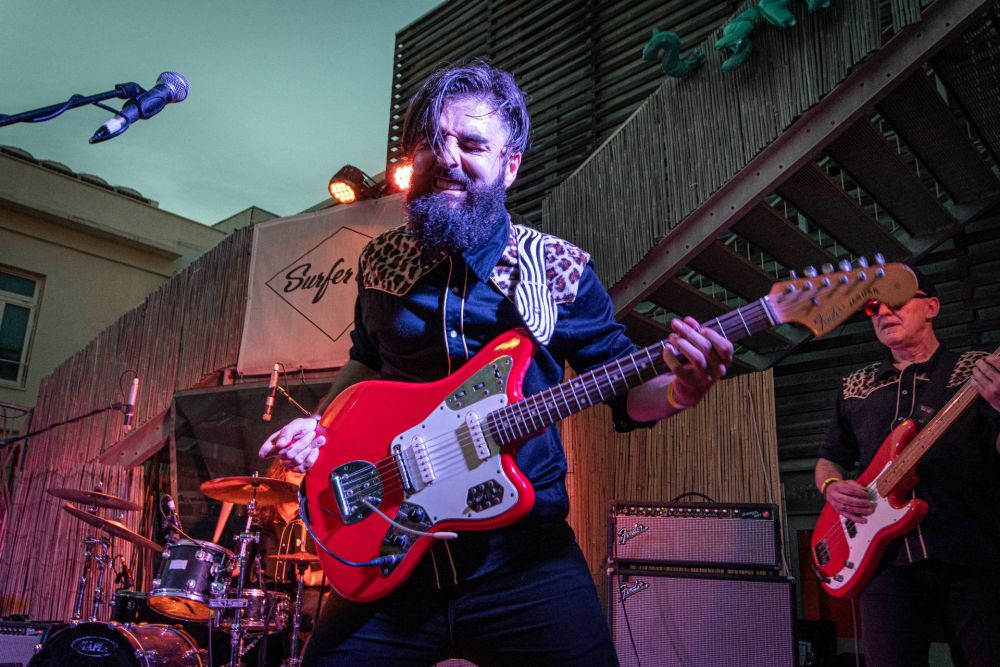 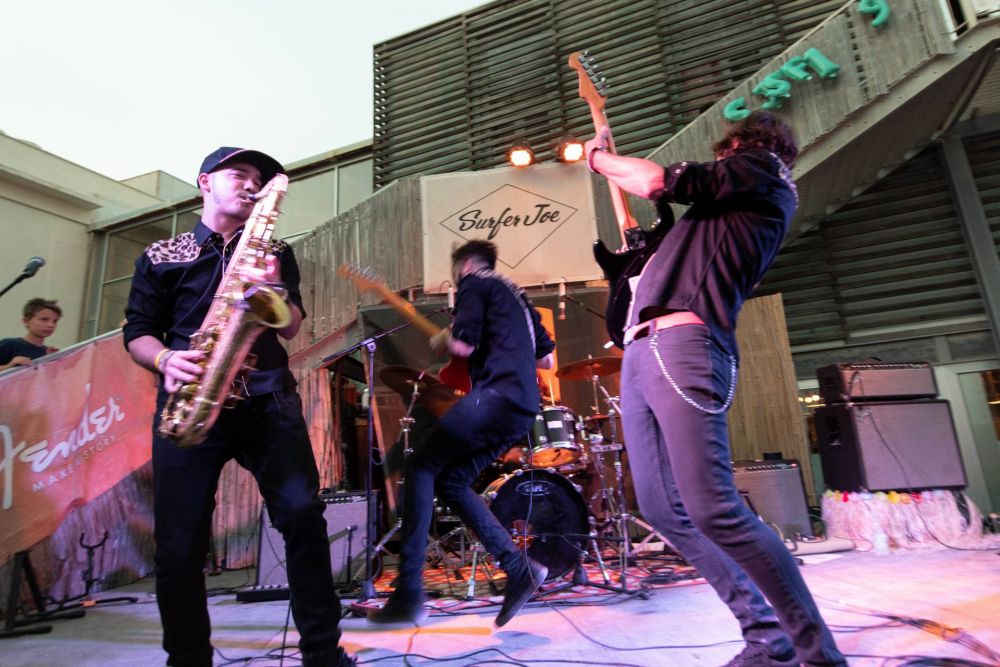 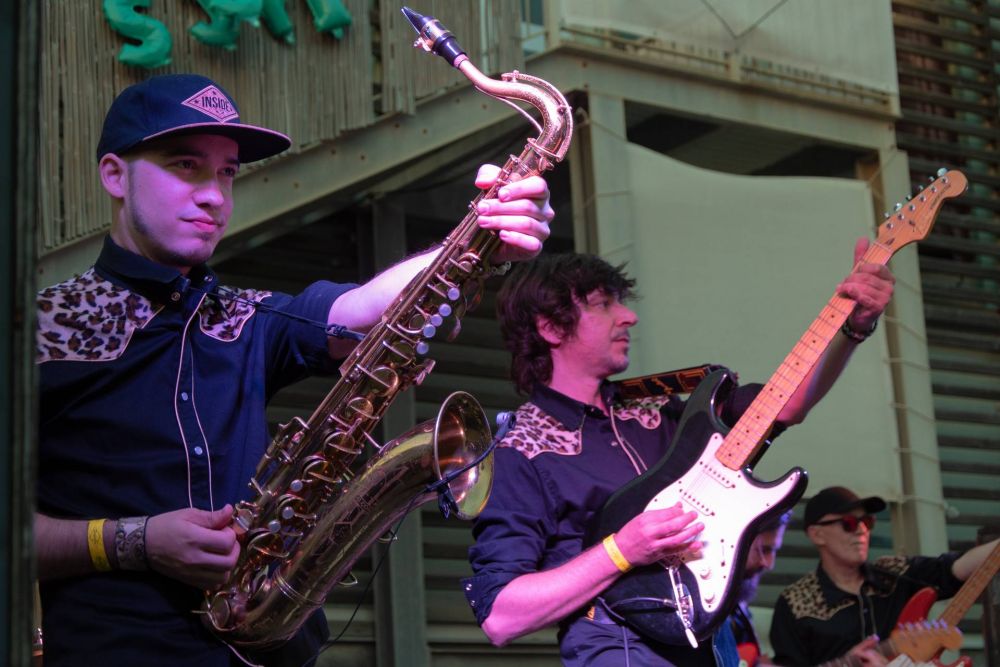 I got a sense that a lot of people weren’t hip to Durango 14. I keep finding out about their albums after the fact, but every album of theirs has improved on the last, with Vol. 3 having some really big, wild moments to it. They absolutely lived up to that and drew a bit of a crowd with their constant energy and matching musical intensity. It’s a sort of spaghetti surf except party oriented -- none of the sadness, just the train robberies! I know they've got a new album in the works and I was hoping maybe it would make an appearance here. No luck. Oh well. 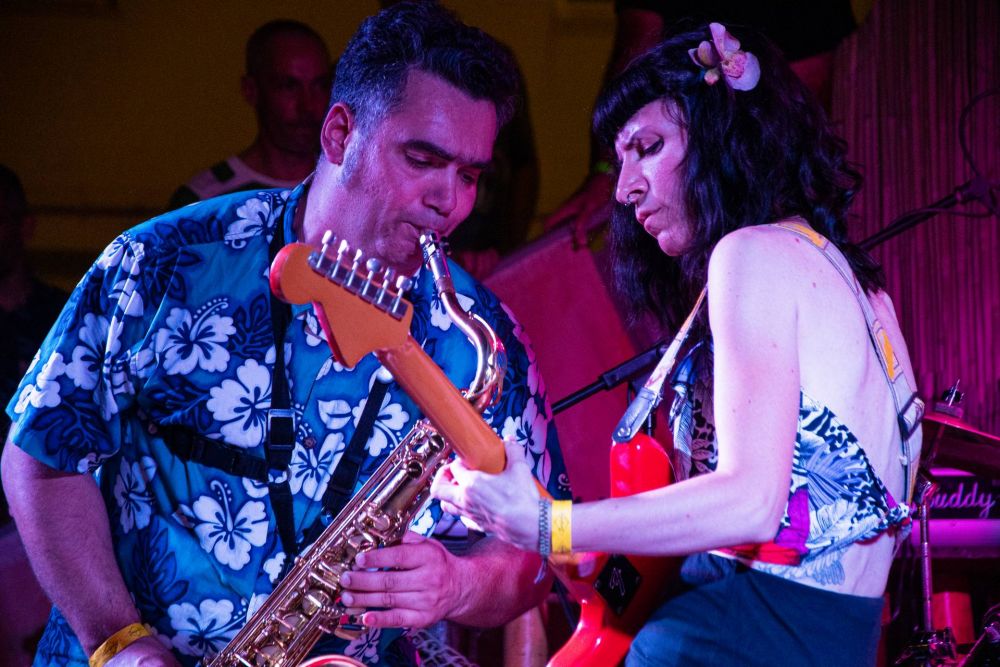 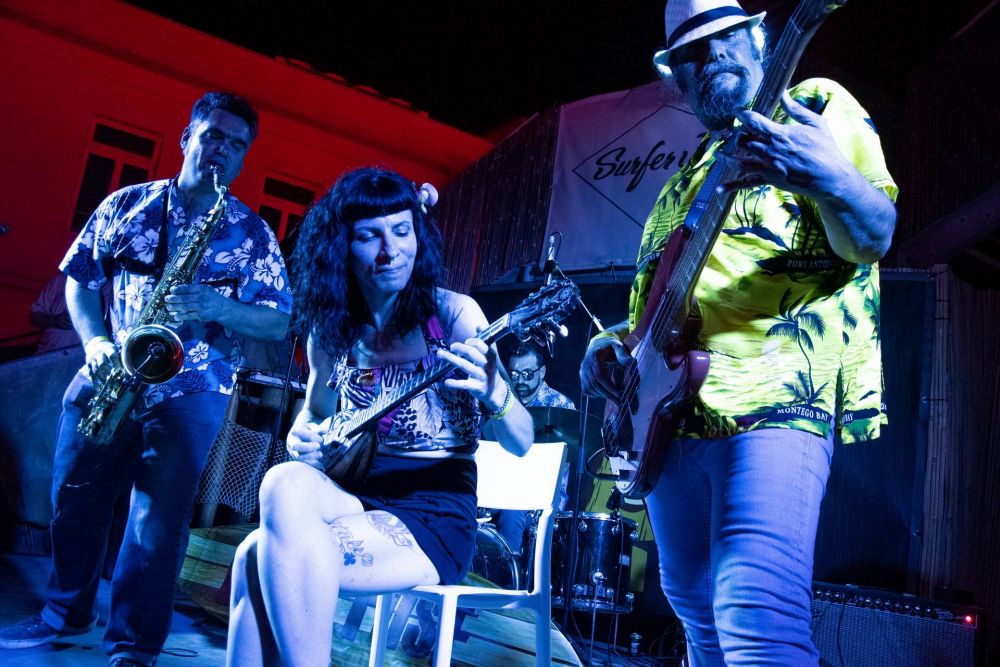 Next up was Dirty Fuse, decidedly a clean break from the Spaghetti Western trend (no saxophone either!). Dirty Fuse have always had a different sound. Sometimes I know why: they’ll be playing old rebetika tunes or playing an instrument that I unfortunately forgot the name of (please comment!), but I suspect the rest of the time I lack the music theory knowledge to pinpoint a different mode or whatever that they’re playing in. 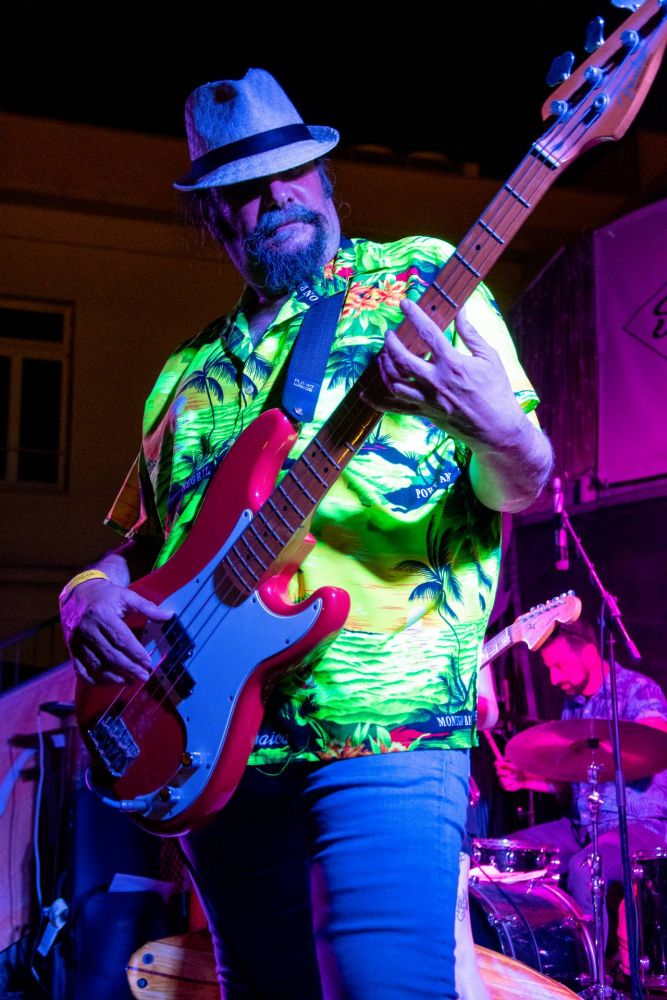 Surprisingly this was the first appearance of a DIck Dale that I noticed, and I got a kick out of them justifying it to the audience by saying “we’re allowed to because we’re Greek”. They were great overall, and a good way to break it up and keep everything fresh (not that I was in any way bored!) 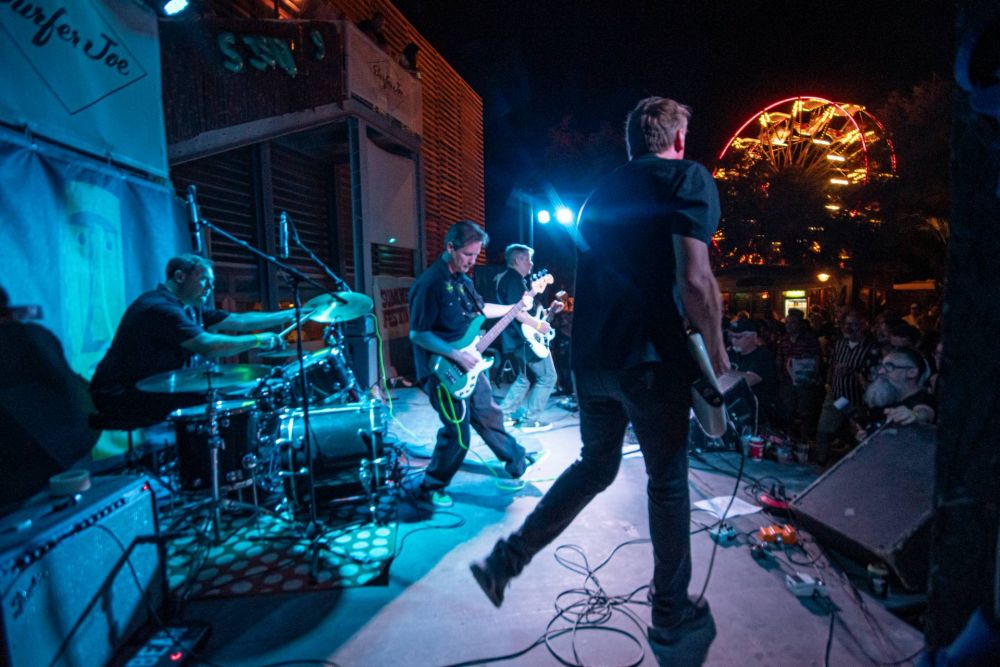 Atomic Mosquitos are a band that I’m surprised everybody likes as much as I do. They even made jokes saying “here’s a slow song” which had the same tempo as the previous, and driving it home more by saying “here’s an even slower one”. Their hollow, shouting guitar sound is relentless and forceful, and the melodies feel like constant life or death, even making a classic Bollywood tune sound a little threatening. I’d seen them before at SurfGuitar101 and thought they were great, and they were great here, and the audience certainly seemed to agree, getting surprisingly thick considering the gates were still closed. Also, I always knew that Stephen Blickenstaff did their album art, I knew they had a thereminist, I only just then realized that they were the same. Whoops! 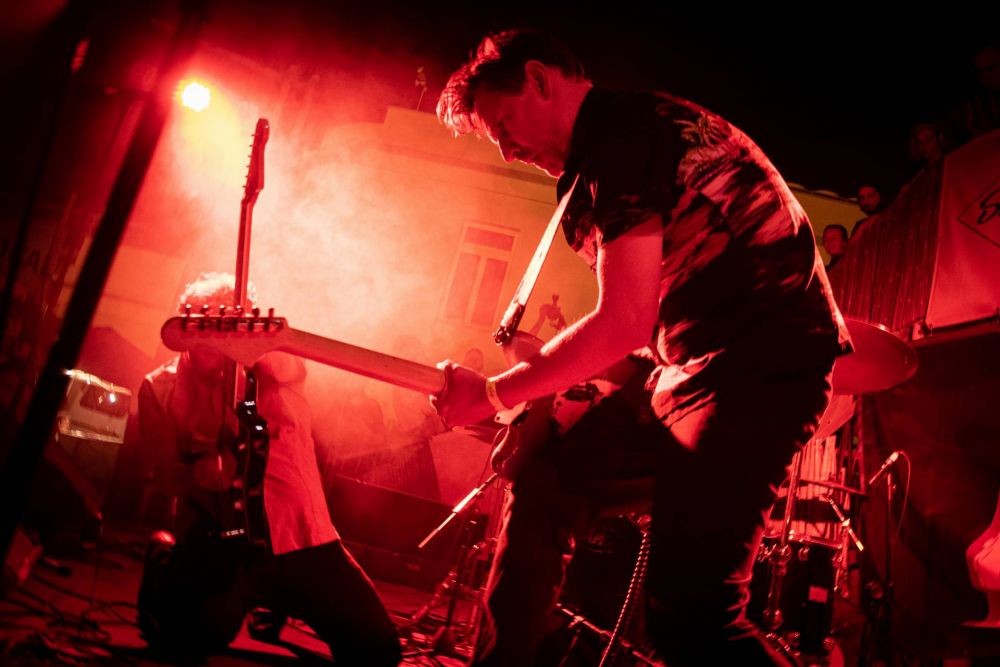 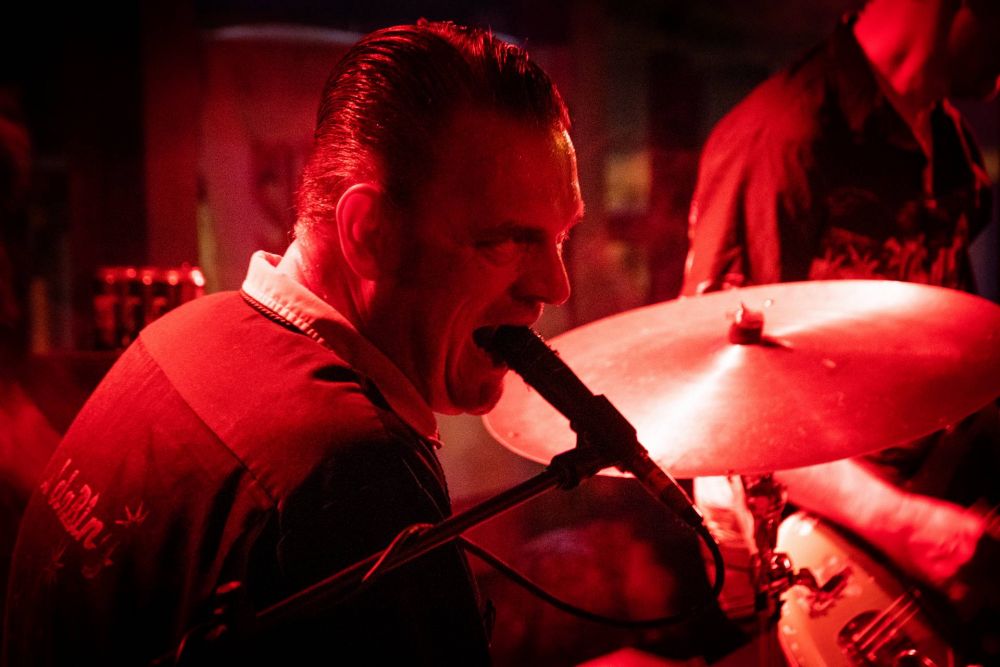 And then of course, The Tremolo Beer Gut. Those that had seen them knew what to expect, those that hadn’t were probably excited because the other people told them to be. That salty, desert-like sound from the albums is reproduced exactly in person, nearly album-perfect, and they can work up a frenzy on a whim. Part of this is the visuals. As they had done at SG101, the lights were exclusively red (worth mentioning, Dirty Fuse were washed in bright blue!), smoke machine puffin’ it’s stuff, looks really striking as they jump, crash, skid all over the stage. I caught Yebo nearly swallowing his microphone while singing Zoo Bizarre. You can see a lot of weird little things in fleeting moments. The reverb-ed out “whoops” are a part of the strange netherworld party that you feel like you stumbled into. For a few people I talked to, this was the highlight of the festival. 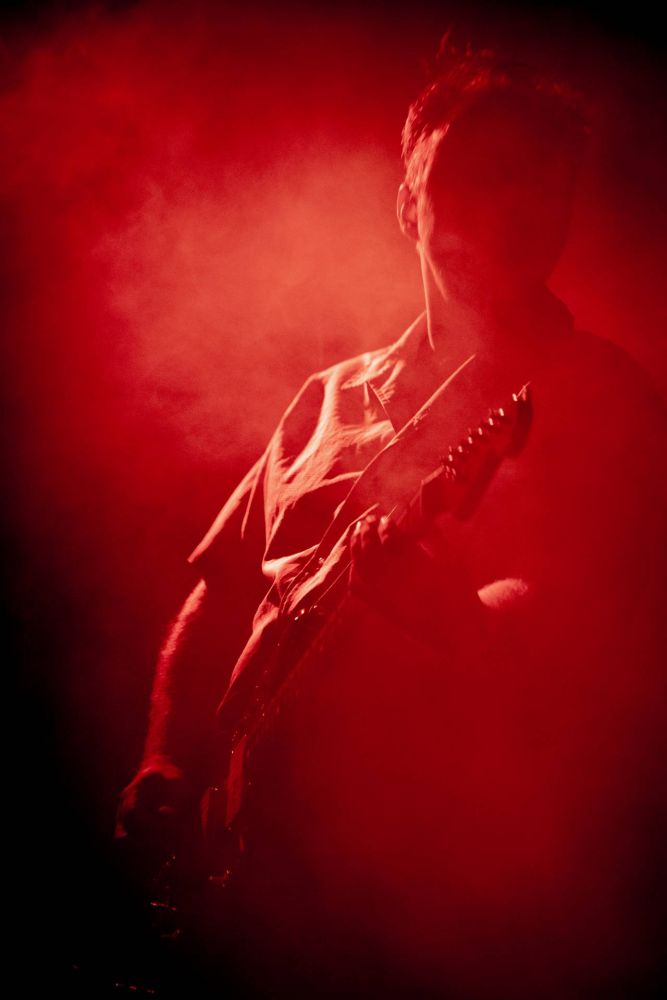 BUT WAIT, THERE’S MORE. A lot of people cleared out after TBG, and the gates to the events opened up leaving DJ Martin Hemmel playing great surf party tunes to Italian teens dancing with a hint of irony simply as something to in a small city on Friday night. As a DJ myself, I won’t pick and choose who dances, so long as they’re dancing. 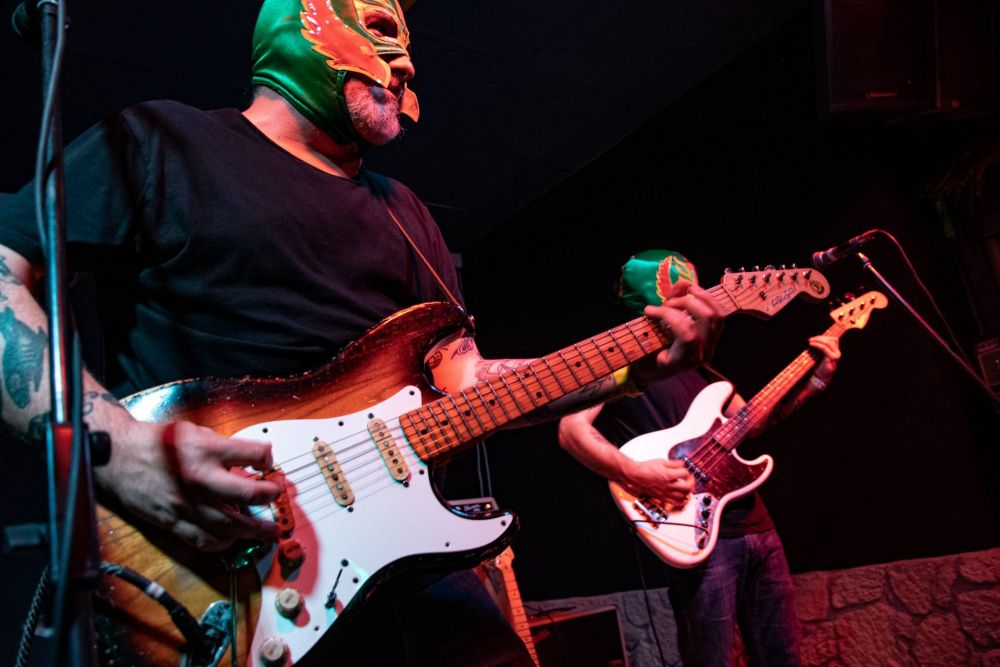 Remember Don Diego from way up at the top of this page? His surf band Los Coguaros were playing up in the tiki lounge to a sweaty crowd very ready to dance. While It was already way past my bedtime, the few songs his masked (until it got too hot) trio played were soooo on-point, whipping out vintage surf licks and solos in exactly the way they were supposed to make an impact. Don Diego had proved that he’s done his homework, but this was the sort of lizard-brain rock & roll that doesn’t come from attention-to-detail reproduction, but from rippin’ it out from somewhere deep inside. While I wish that more of the surf die-hards had seen it, shoved into a small room is the party atmosphere this band needed and took advantage of, so I wouldn’t have changed a thing. Well, I should have changed my bedtime and stuck around longer.

So yeah. Friday was great. I’m not sure I want to choose one day over another, but suffice it to say there wasn’t really a weak spot. On to Saturday!