The final day of Surfer Joe started a bit later, which was great because that was the case for me too. Us VIPs were treated to a breakfast more in line with what I would expect from Surfer Joe diner, including pancakes, bacon, sausage, croissants etc. Each day of these breakfasts was great. 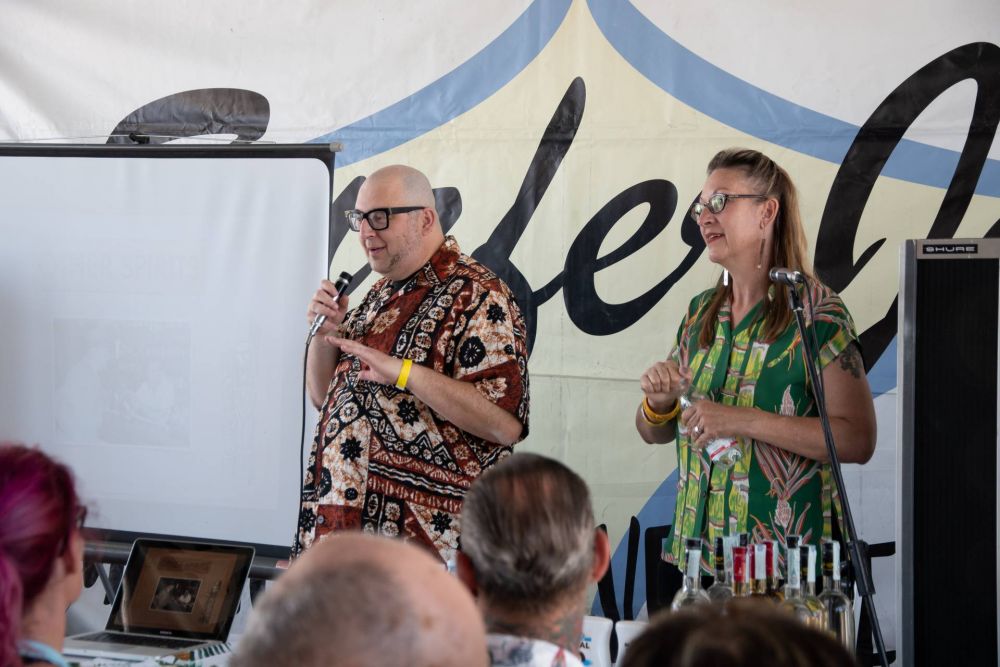 There was only one symposium today, and as a non-drinker I was a little skeptical: a crash course on creating great tiki drinks within your own home, hosted by Ran Mossesco and newlywed Marie King. Ran crafted an award winning cocktail and curates his own home tiki bar, Marie manages the Tonga Hut, the oldest tiki bar in Los Angeles. They came prepared, with visual aids that even ranged into the purely decorative, and a screen for a powerpoint that unfortunately was having a hard time combating the sun. And of course, there were gustatory aids: three rounds of shot-glass micro-cocktails for the audience. I tasted all three and appreciated trying to pick out the differences, even though my tee-totalling tongue had trouble with the strong alcohol.

The beginning of the presentation was a quick history of tiki bars and tiki culture, which I found absolutely fascinating and was presented in such a smooth way that suggested that it was fully ingrained, natural conversation. They moved onto the composition of tiki cocktails, basic rules to go by, ways you can effectively cut corners, spots where you absolutely cannot. I walked away from it thinking “maybe I should try this” and remembering immediately after that alcohol makes me involuntarily recoil when I try to drink it. 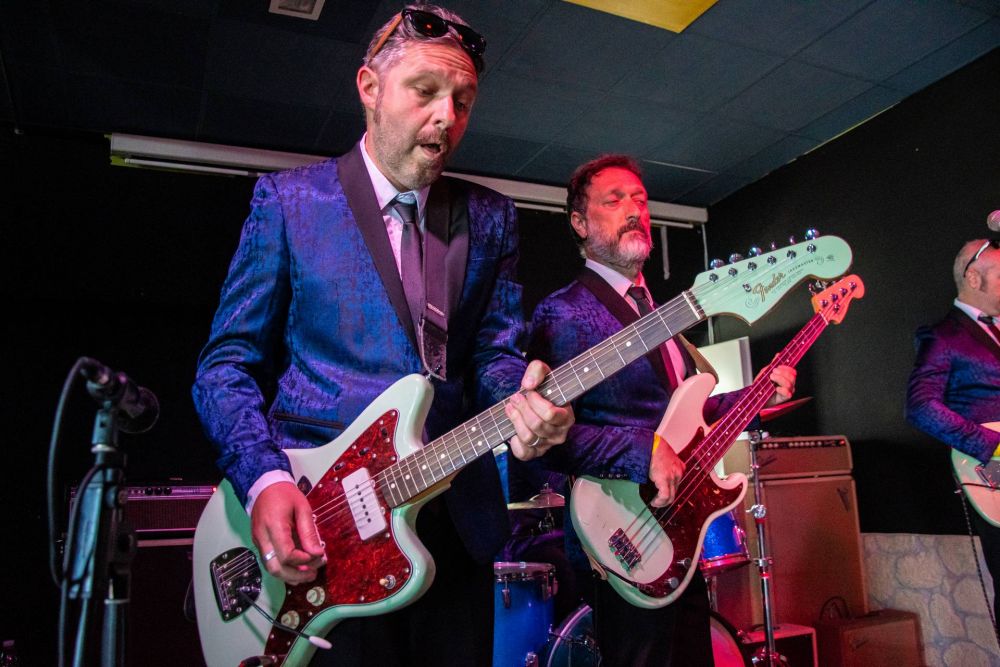 Then the drinks were served musically. The impeccably dressed Molokai Cocktail did a set full of traditional covers and some surprisingly recent ones from bands like Langhorns, Los Straitjackets and The Eliminators. They also snuck in two of their own original compositions which stood up well next to the rest. Great sound, great tone, good way to start the day musically. 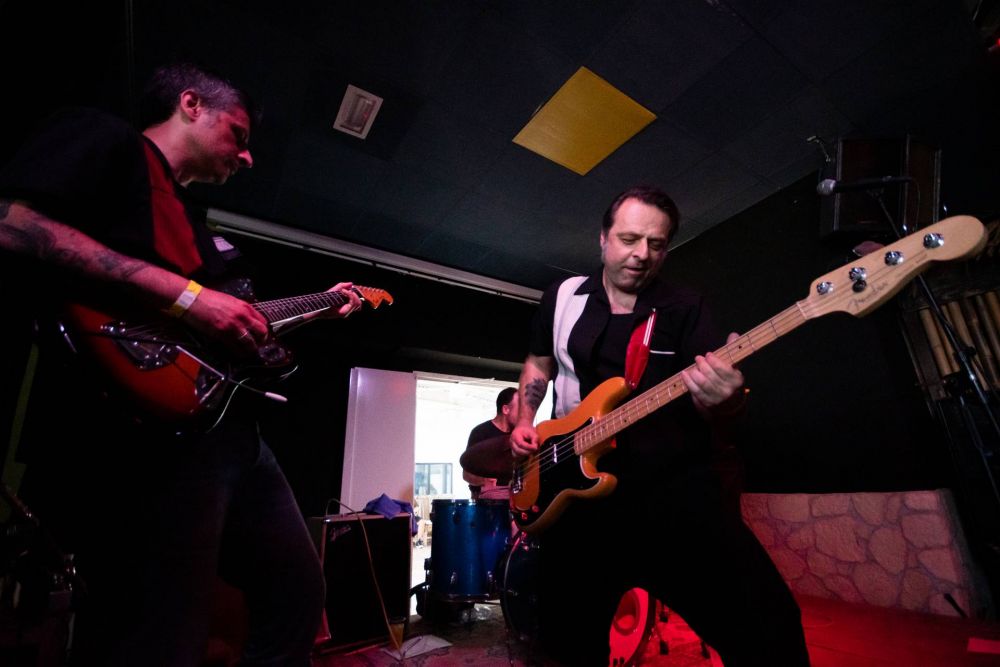 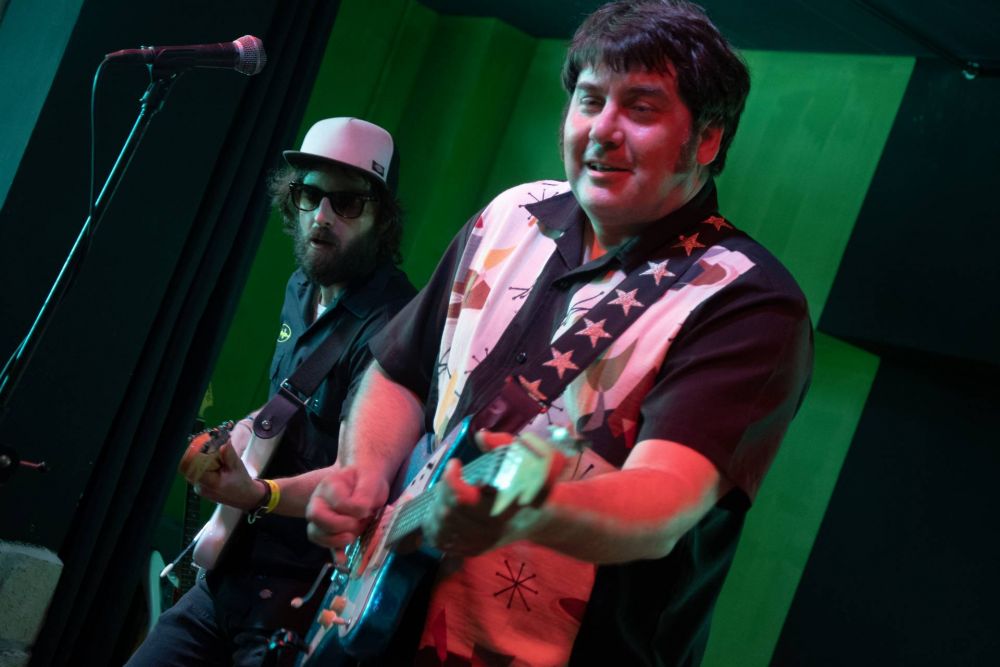 Then was something really special, dubbed the Super Trad Surf Rotation Set. It featured Surfer Joe, The Kilaueas, and Bradipos IV rotating in 15 minute sets for 3 hours, playing mostly 60’s covers. The crowd was surprisingly dance-ready and all three were equally capable of delivering. That constant rotation kept things fresh musically, but not physically, as I was pretty worn down by dancing and took a break in the 3rd hour (though many, including Ferenc Dobronyi kept moving the whole way through -- I was impressed!). 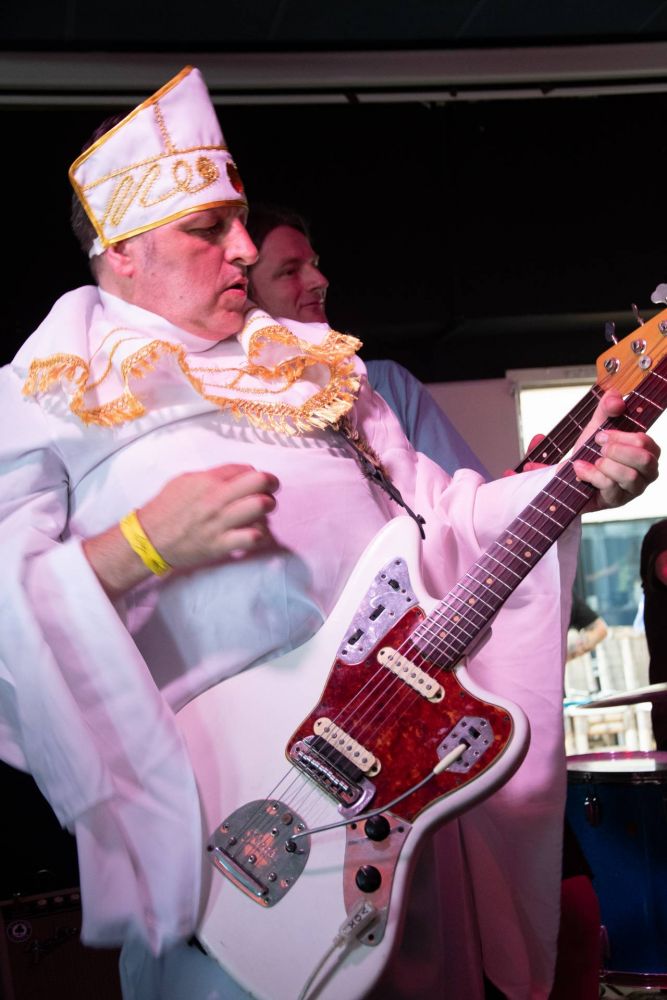 This set also saw the second appearance of The Pope as portrayed by Ralf Kilauea. Why let a good gag be relegated to one night? 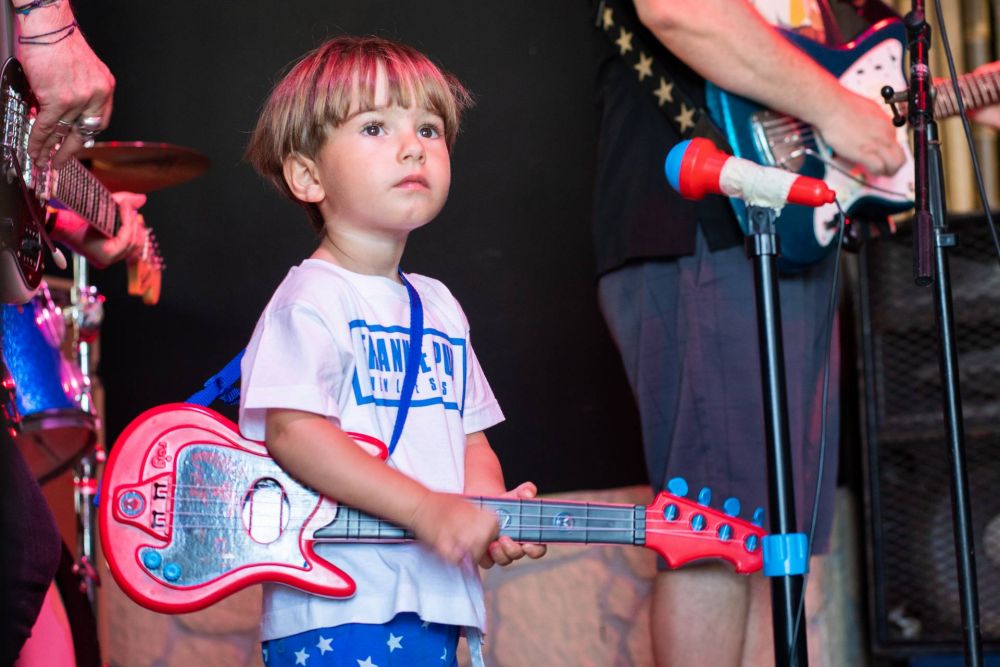 This was also where we saw the youngest performer of the festival. Don’t worry, despite the mic, no vocals. Not much guitar playing either. 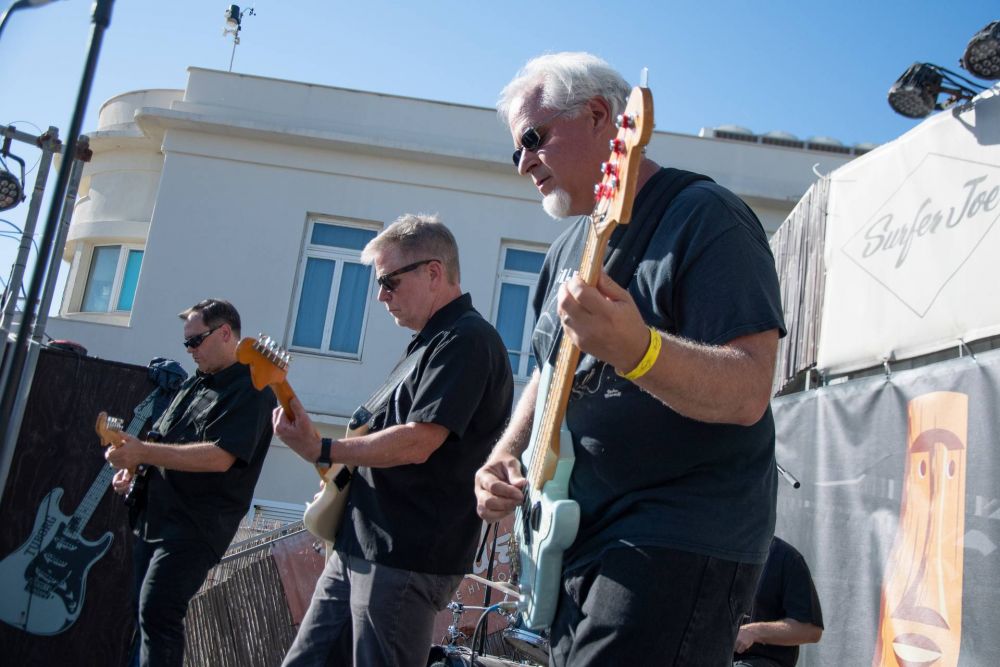 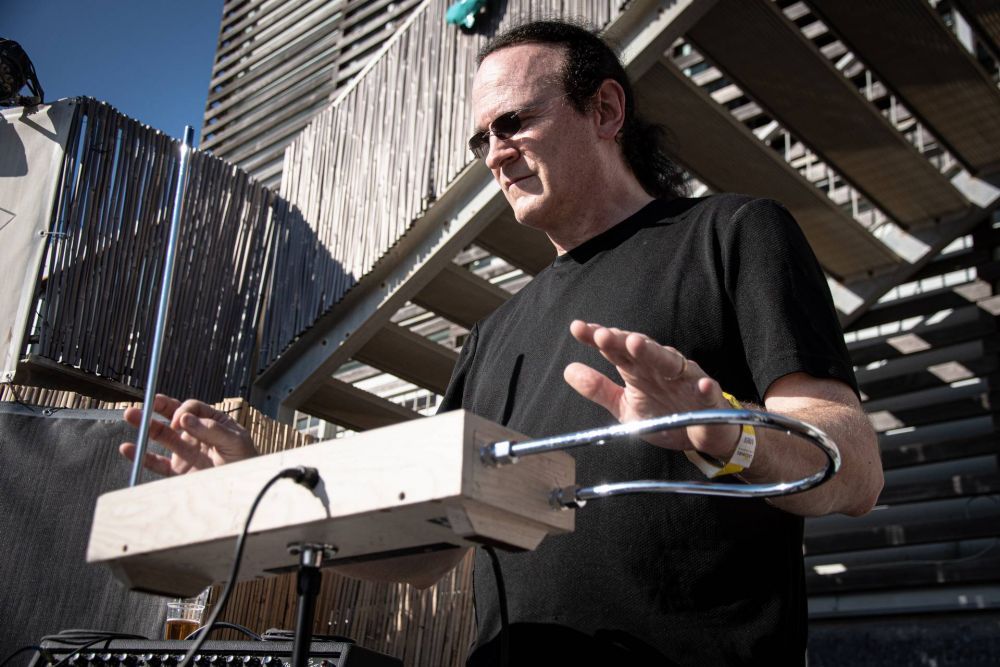 The first set outside was a revival set from Monsters from Mars. Most of these members eventually went on to be in Atomic Mosquitos . In fact, they played “Dark Side of the Chimps”, which would eventually be a Mosquitos song as well. I got a kick out of such an ostensibly creepy band playing covers of “Don’t Worry Baby” and REM’s “The One I Love”. There was a Deadbolt cover in there too. While it was a fun set, I think Atomic Mosquitos are a bit more of a matured version of what was played here, and I got a kick out of their ending line “We were Monsters from Mars” as they walked off the stage. 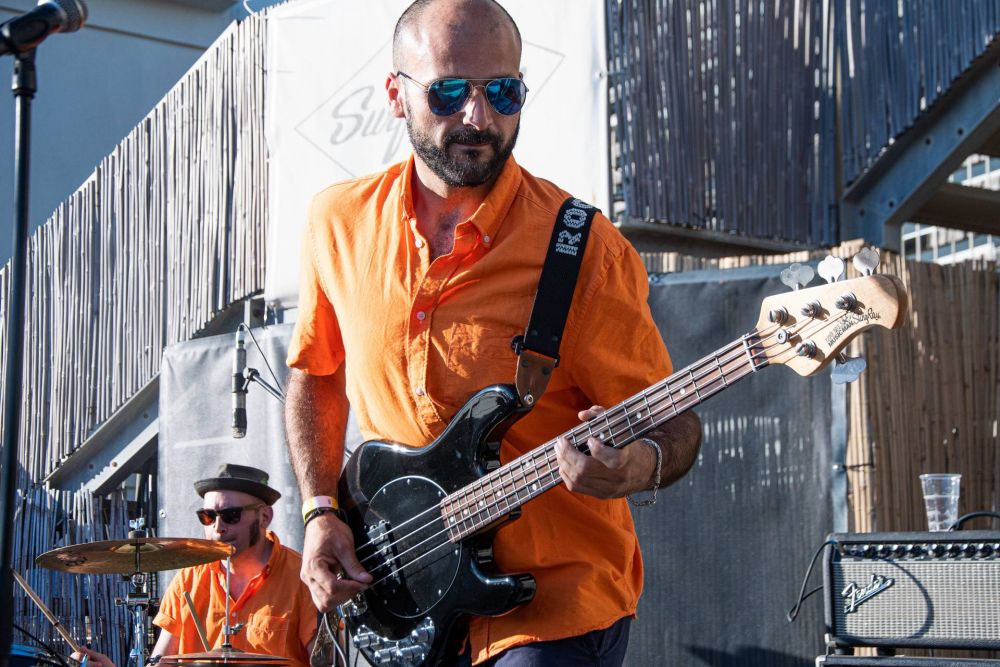 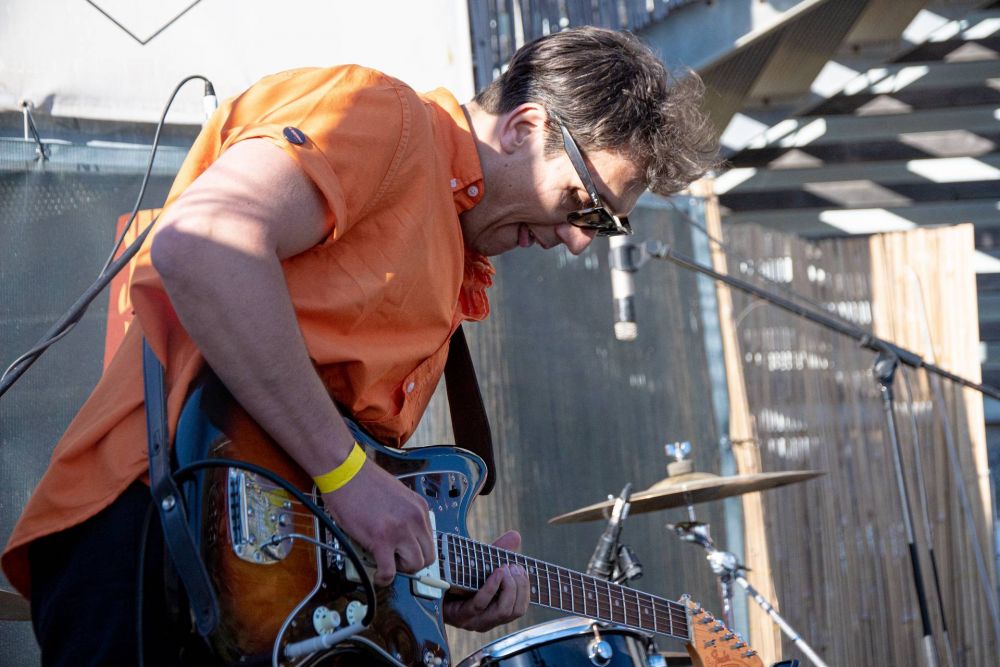 Unfortunately I only caught a small bit of The Guantanamos, as I had go back to my B&B for a spare camera battery. They played a full set of originals with a trad sound but an aggressive energy. Wish I could have caught more, but I at least got some photos in there. 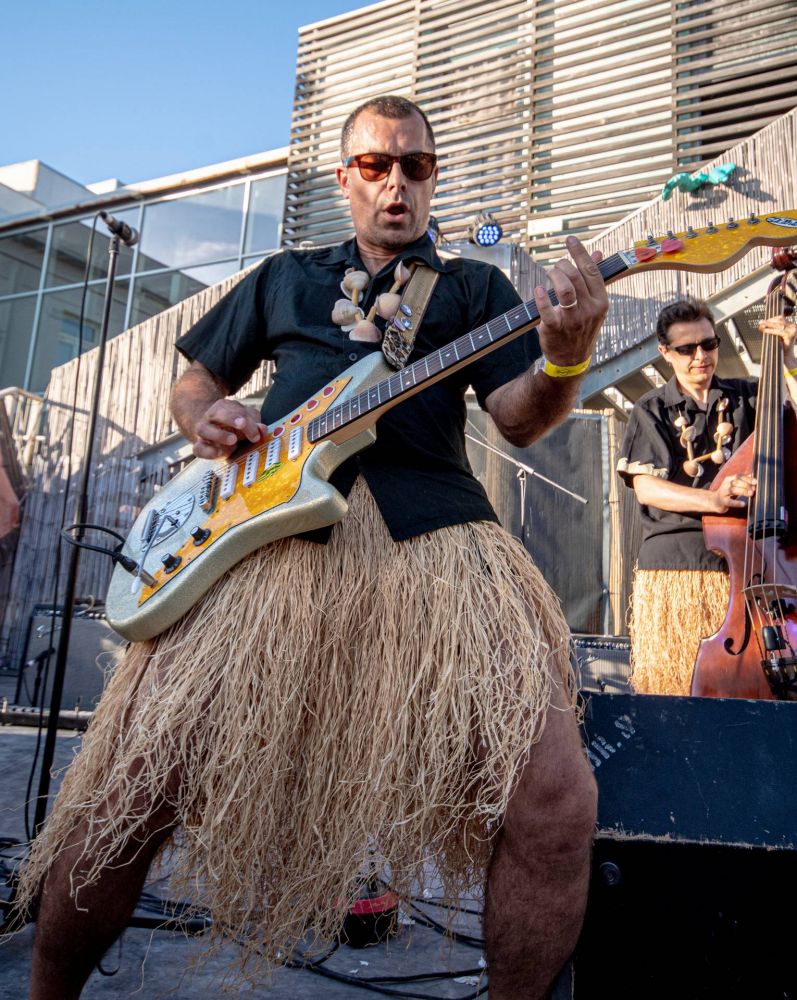 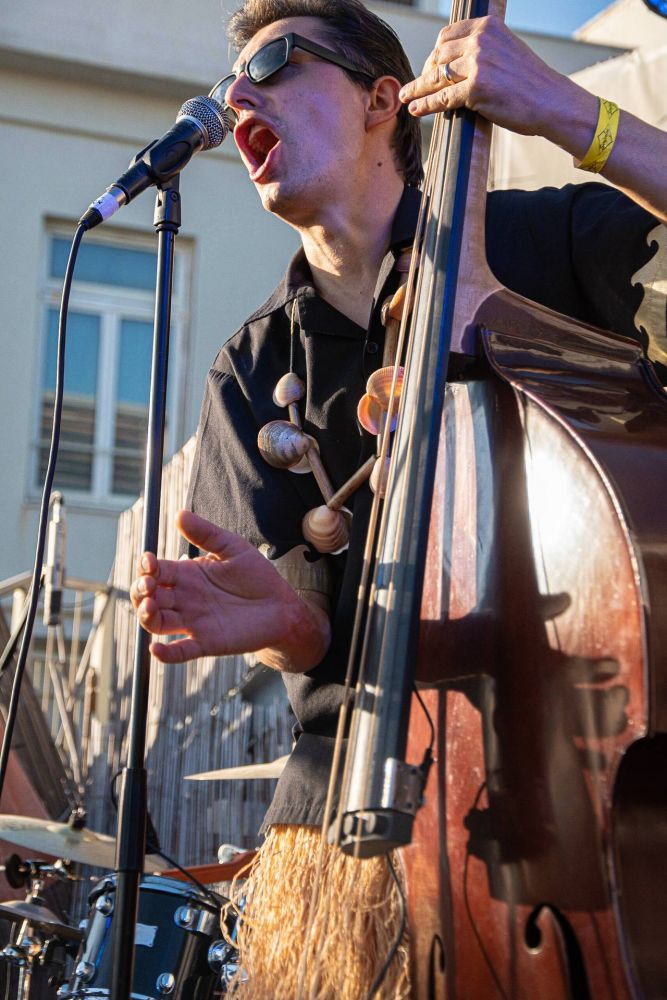 I Surfoniani played a very similar set to their Saturday indoor show, but I’m glad they got a chance to reach a wider crowd. That said, I think their silly approach worked better in a more up-close setting. I got better pictures outside though. 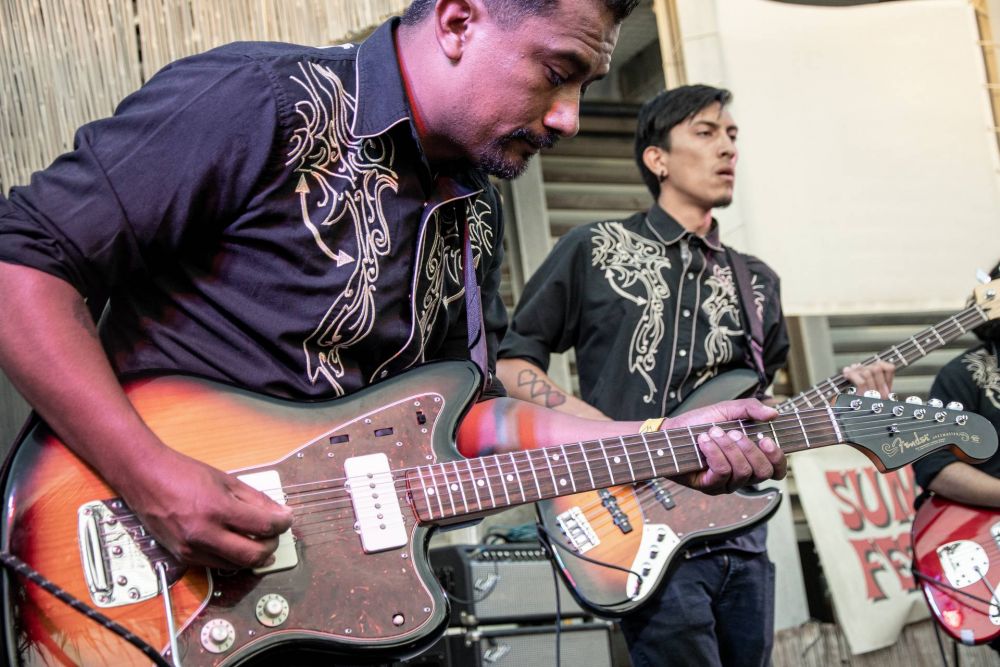 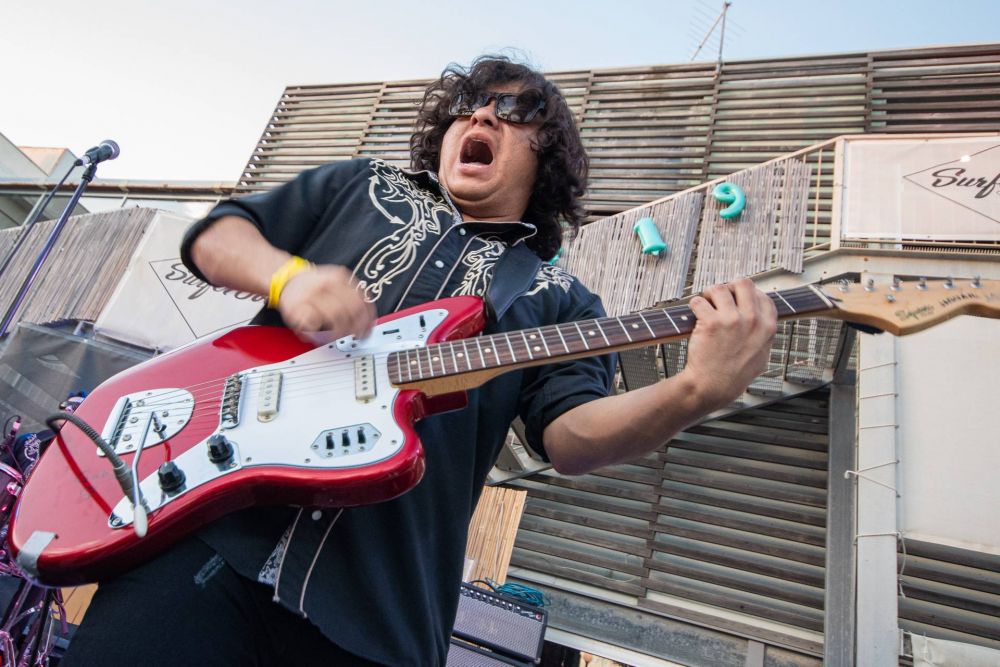 Speaking of a chance to get a wider crowd, there was space in the schedule to sneak in The Sonoras, which I was super thankful for. The Sonoras had missed their initial timeslot due to air travel issues, so only a privileged few caught them late Saturday night. I thought they were outstanding during this sunset slot, with great stage presence and a charged energy to their Spaghetti surf. It was a different playlist too, as I noticed that their Saturday night set didn’t include my favorite “Gran Jaguar”, and it sounded loud and strong during this set. 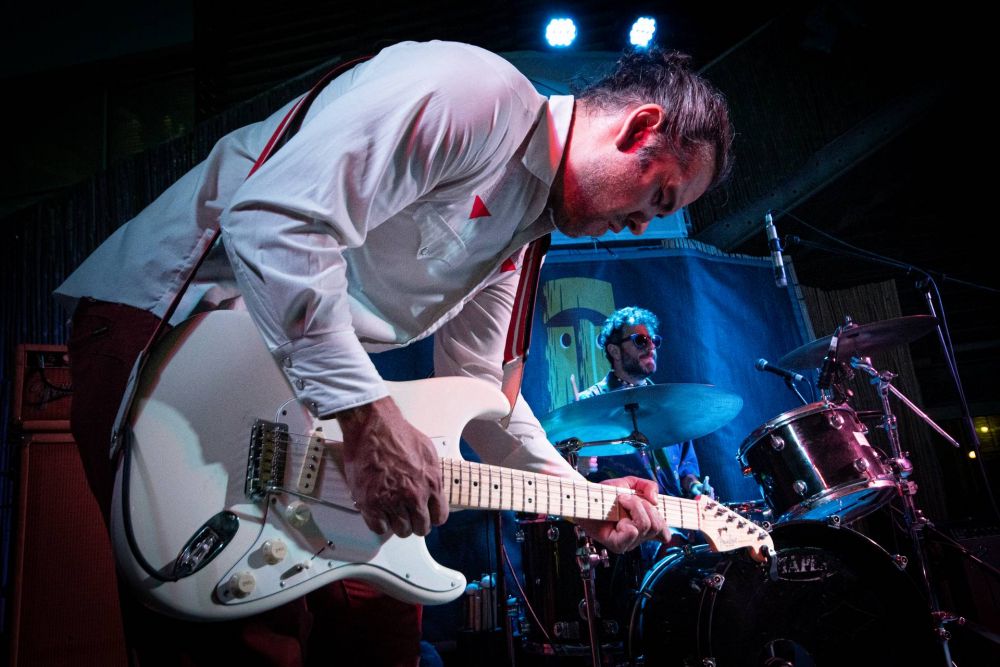 The Trabants then got a proper outdoors set, similar to their smaller set starting out with more danceable and psychedelic songs before moving to the new Spaghetti Western stuff and back into the kitchen sink. It was great hearing these loudly ringing out on the big stage, gave them a bigger electric charge! 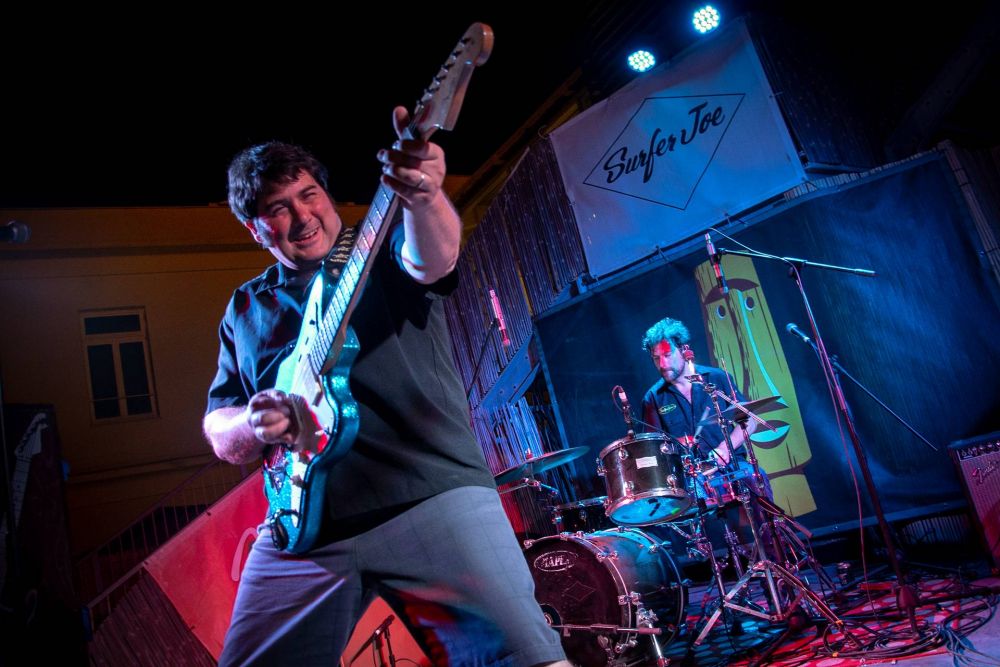 And finally a proper set from the master of ceremonies, Lorenzo “Surfer Joe” Valdambrini. I found here and at SG101 that these songs really come alive in person: they’re louder, punchier, and Lorenzo’s personality is visible and enhances the songs. I believe he played only his own material -- not even any Astronauts! There was a different vibe to Sunday that’s hard to nail down. More intimate maybe, as the festival was coming to a close. It was great to see the man behind it contribute his own piece in such a great fashion as we reached the beginning of the end. 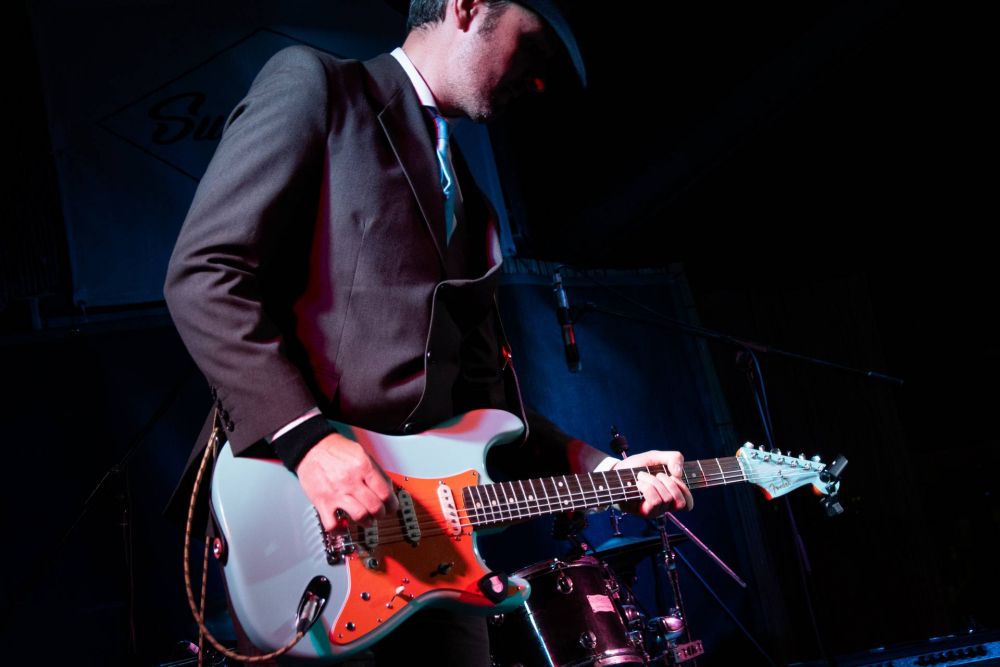 The next to take the stake was a mysterious figure billed as El Zeb, standing in a suit with the shadow of a fedora shrouding his eyes. I know who this person is, I mentioned it in the review of the excellent 7” they released, but I kind of like it better if we pretend that he's a mysterious non-person. And maybe as you hear him play these Dick Dale covers, if you’re really dense you might think that it’s the ghost of Dick Dale playing them -- after all he’s even got his guitar strung up like the King of the Surf Guitar. Unfortunately we were not joined by Dick Dale’s backup cast of Dusty Watson and Sam Bolle, like on the El Zeb 7”, but this was a great set acknowledging the elephant in the room during this festival. Or perhaps the elephant missing from the room? Dick Dale had only a few nods during this festival and right at the end we got a great tribute to him. The originals from that 7” were played as well, but overall this didn’t feel like it was about El Zeb as much as Dick Dale. 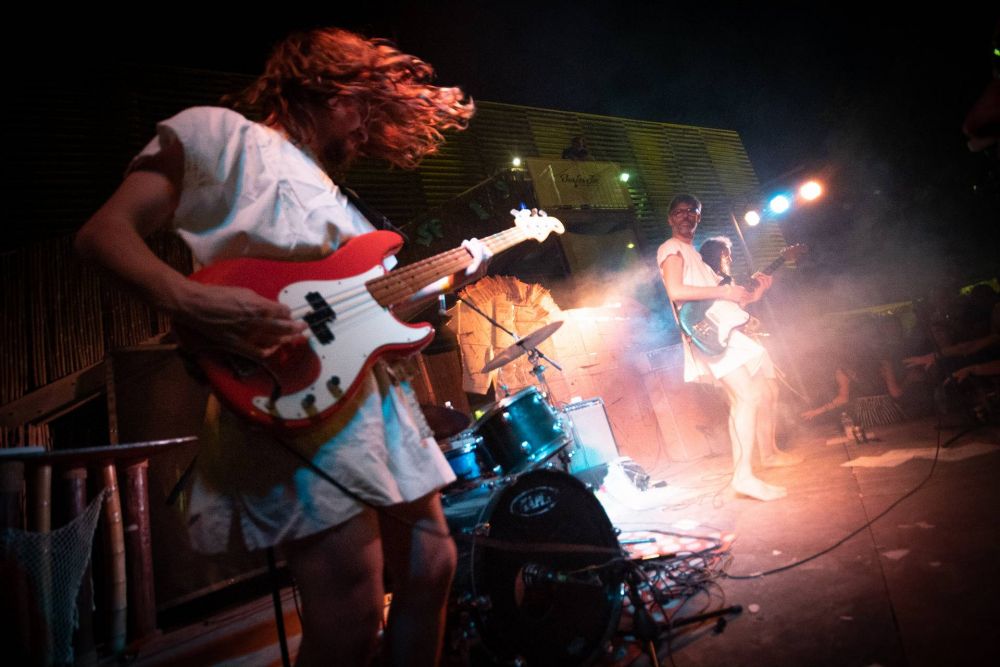 And finally Les Agamemmnonz who knocked us out on their US tour last year. Throughout the day members of the band could be seen erecting a giant cardboard Trojan Horse, and sure enough as we waited for the final act of the night it stood on-stage ominously/humorously. And then a door near the bottom of the structure opened, and the toga-clad and barefoot members of Les Agamemmnonz crawled out. 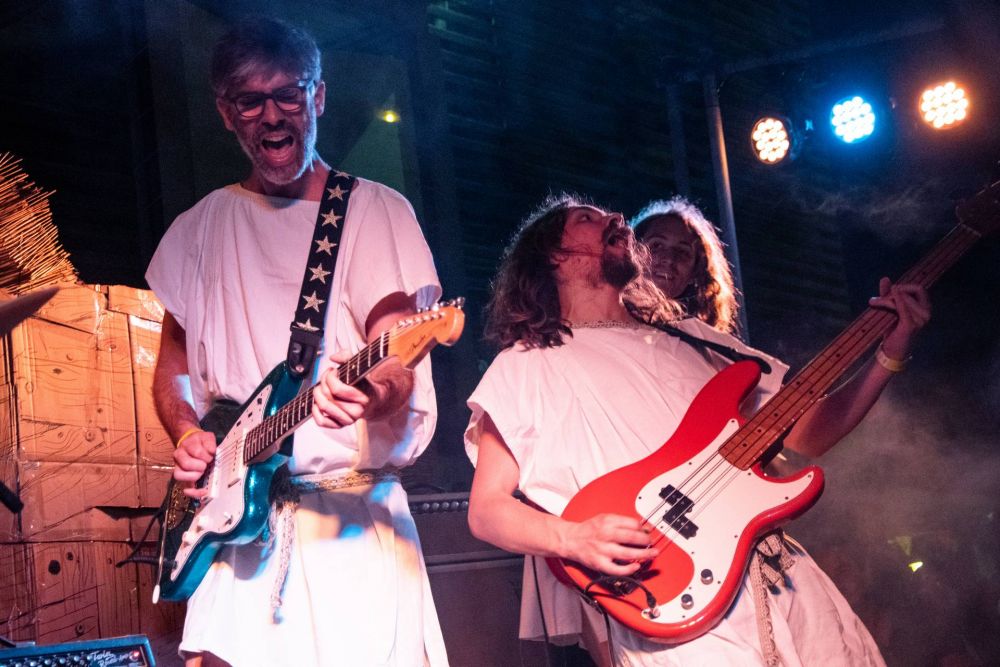 They started with “Diana” because of course they would. Not only is it a fantastic song, but it’s practically designed to build momentum from a cold start. This band is so different than most bands you’ve seen, surf or otherwise. They bumble around onstage with a loose energy, like baby chicks with guitars, and the songs seem to fall out of them accidentally but with pinpoint precision. It all looks so goofy and friendly, like they’re just messing around while we watch, but it’s all very well thought-out. Their unique prickly sound, is so fun to hear when they choose covers that match their style, in this case “Let’s Go Trippin’”. 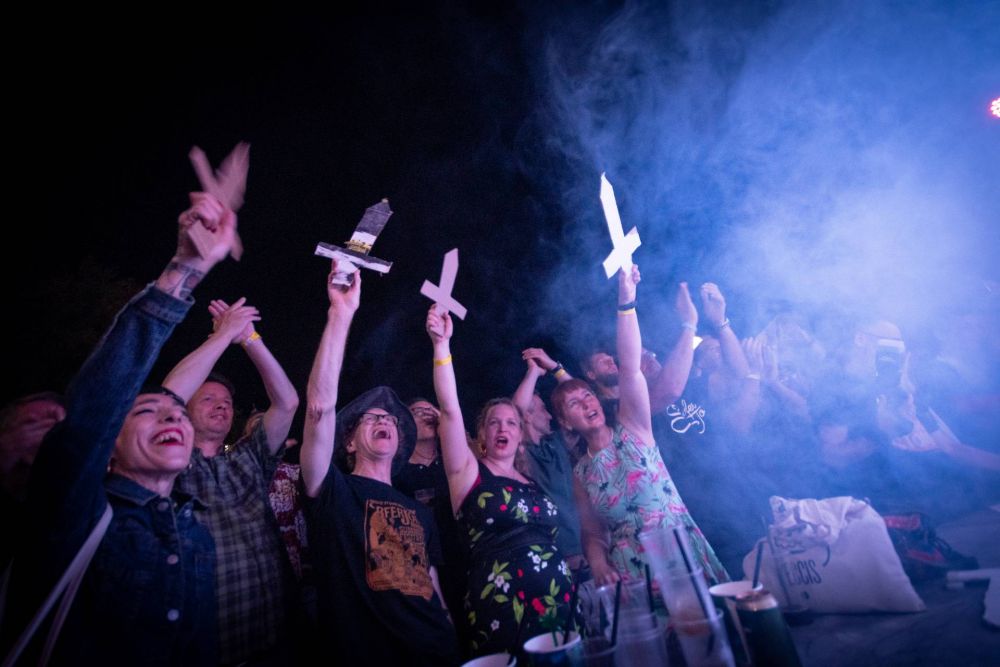 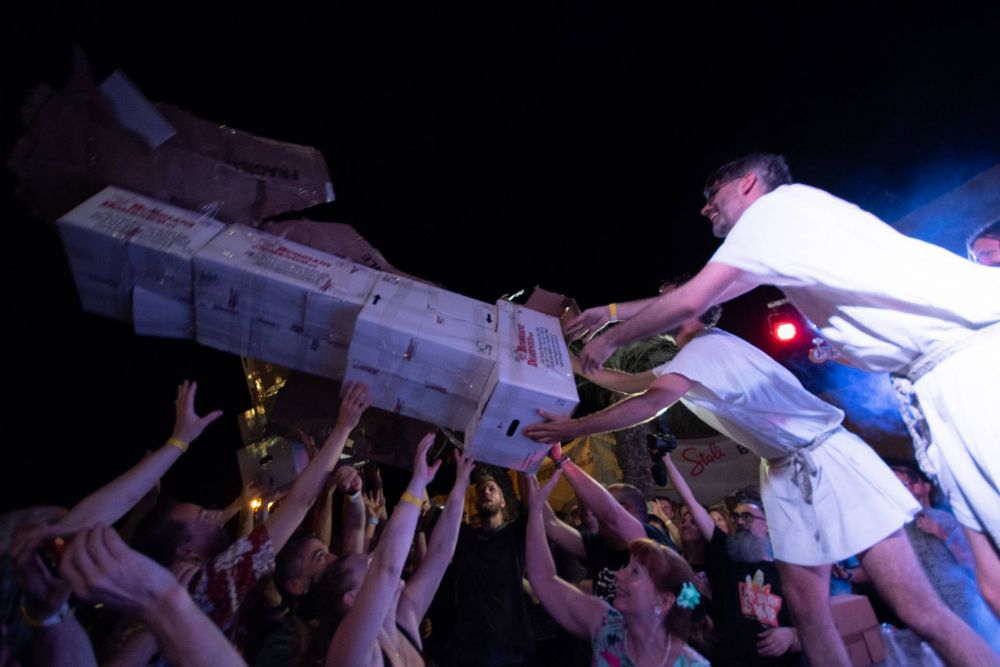 Their gimmicks are strong, with not only synchronized guitar movements, drummer beating guitar strings and other common ones, but they started throwing out cardboard swords, shields, and other weapons for the audience to wave around. When their set was complete, they retreated into their Trojan horse (pretty sure that’s not historically accurate), then threw the horse into the audience for the encore playing “Au Revoir”, a song suited for their departure like the song chosen for their arrival. Though not everybody was a blown over as I was, it was one of the best shows shows I’d ever seen, even better than their SG101 performance which I thought was great (and they apologized for because they were tired).

Well crap. It’s over. I realized that there were so many people I’d meant to meet, and went on a lightning round of byes and hi’s as fast as I could. It truly was amazing to see so many of these people that I’ve known about in person all the way on another side of the world. It was three days of non-stop surf music, and though physically drained I’d take another helping if there was one.

Thanks so much to Lorenzo and everybody that put this fantastic event on. It was truly an extraordinary event and worth every terrible minute of sleeping on airport floors on the way back. I can’t stress enough: if you ever think about going to these things, just do it. These opportunities are rare, and sitting on the outside of communities like these is less fun than jumping in.