This was my second year at SG101 and tell ya right off the bat: it's a ton of fun and if you've ever thought about going you should go.

In previous years the actual convention was on Saturday, but it was expected that you'd probably peek your head into one of the many surf shows beforehand and the free Sunday show. It was expected, but last year I only did Saturday. This year the event was expanded to have a Friday show at the Alpine Village (same venue as Saturday) as well as a Sunday show with many of the bands playing alternate sets (plus a surprise performance by the Blair/Pongracic Band). Well, I missed Sunday this year too... but I did go to Friday, and that's what you'll read about here!

Before the music had even started, I was out over $200. You see, the vendors at the show essentially create a record store stocked only with surf records, including a lot of ones you've had a hard time tracking down. The real knockout in this respect was Bob and Linda Dalley (of the Surf Raiders) who decided dump their entire collection. LPs mostly $15, CDs for $10, 7"s for $5... from a prominent surf historian. I got there at 5pm, an hour after he set up, so while I felt like I did great, I heard tell of how much great stuff the earlybirds got.

First up was The Surf Rockers with a Dick Dale tribute. Jeff "BigTikiDude" Hanson, organizer of the show, said that they wanted to bestow a lifetime achievement award of sorts to Dick but that Dick was out on tour. When is he not on tour? 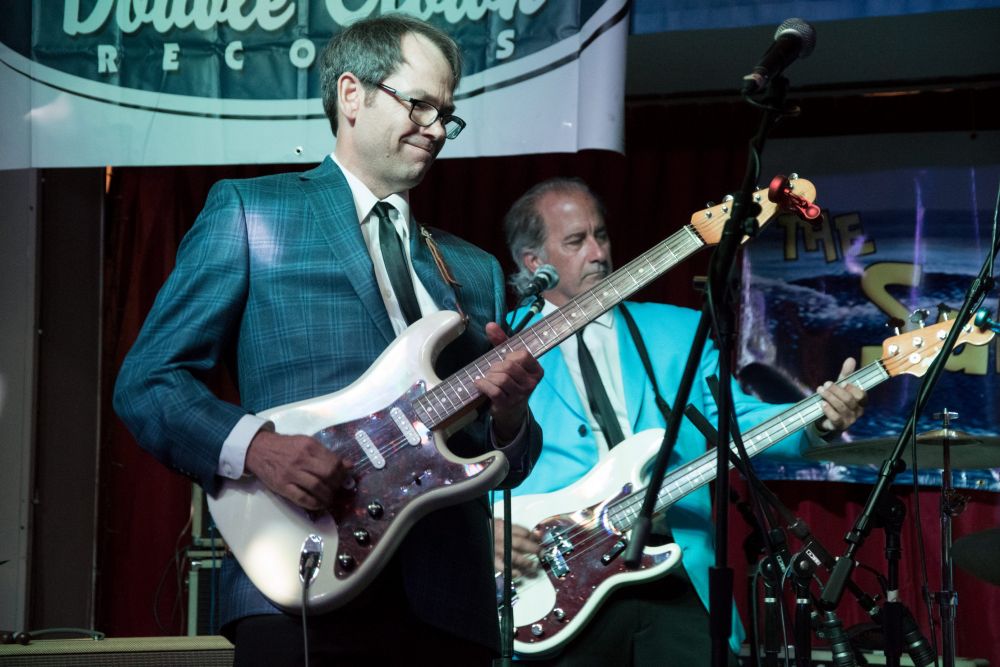 The Surf Rockers not only set the tone but set the volume. They were loud as hell, as one should be for Dick Dale. Not only that, but it was pleasing to see coordinated outfits and synchronized movements in the first act. I wasn't familiar with the Surf Rockers going into this, but they absolutely delivered. I don't have a good pic of him, but I especially appreciated the enthusiasm and showmanship of the sax player. The only complaint: No Mr. Eliminator? Granted there's not enough time to play every great Dick Dale instro, but it's always a bummer when your absolute favorite doesn't make the cut. Overall, a great way to start the evening. 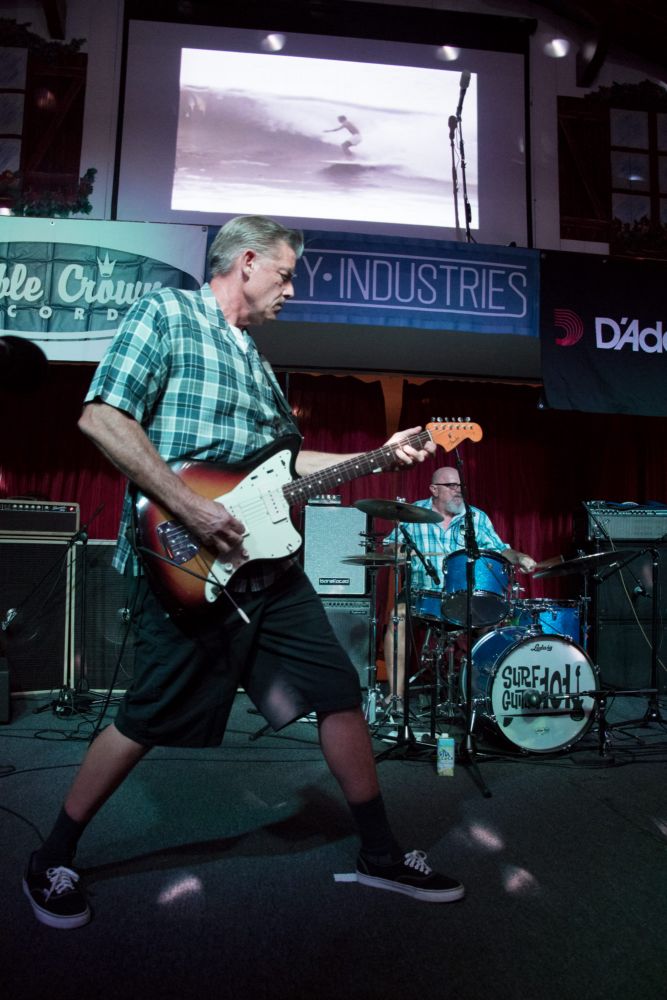 Outerwave were the first of a big stretch of trios, playing an angry mix of classic covers and originals. Another band I didn't know much about going in, but they had a great energy to them. 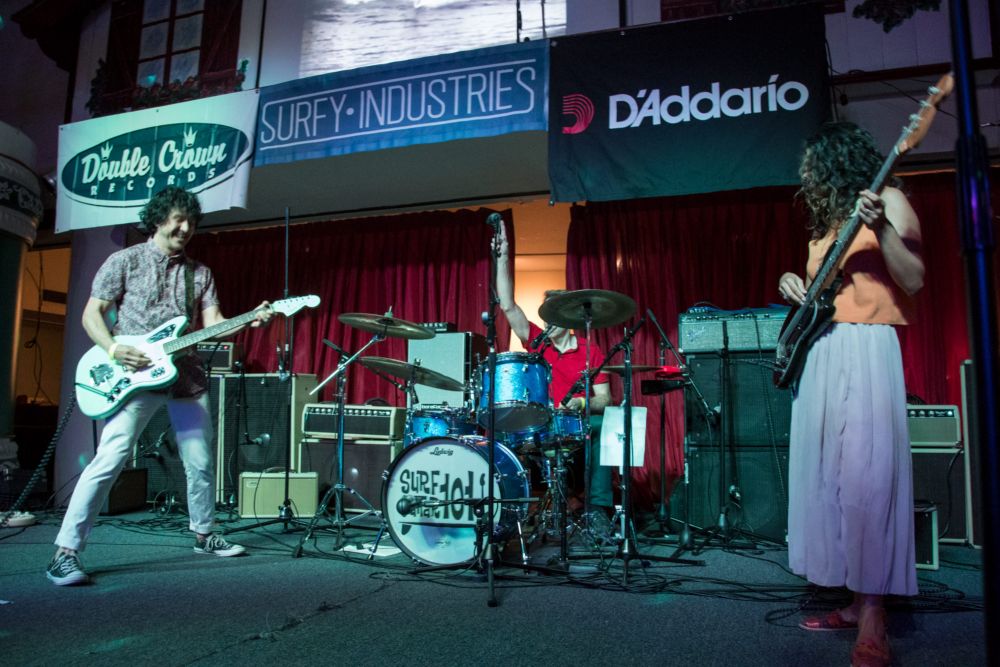 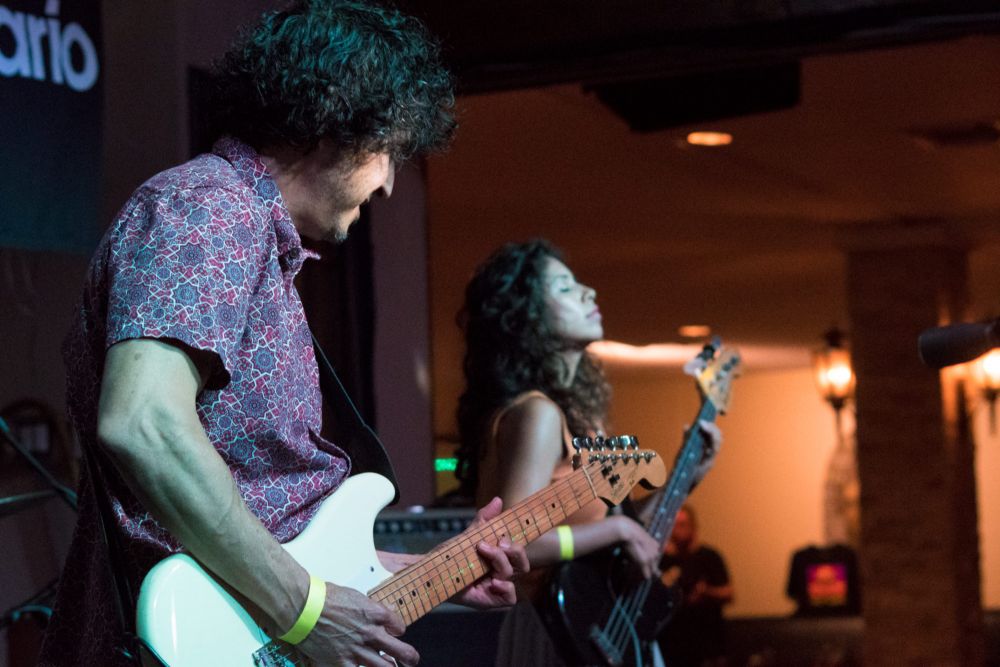 Par Avion are a newer band that I don't think have quite established a name for themselves in the larger picture of the surf scene yet, but I'm so glad they were on the roster. Probably the most progressive act of both nights, they had a much more syncopated and unique rhythm to them. They delved into chicha for a minute too, which always scores points with me. It's hard to choose highlights in a lineup that really never went wrong, but this was a standout. 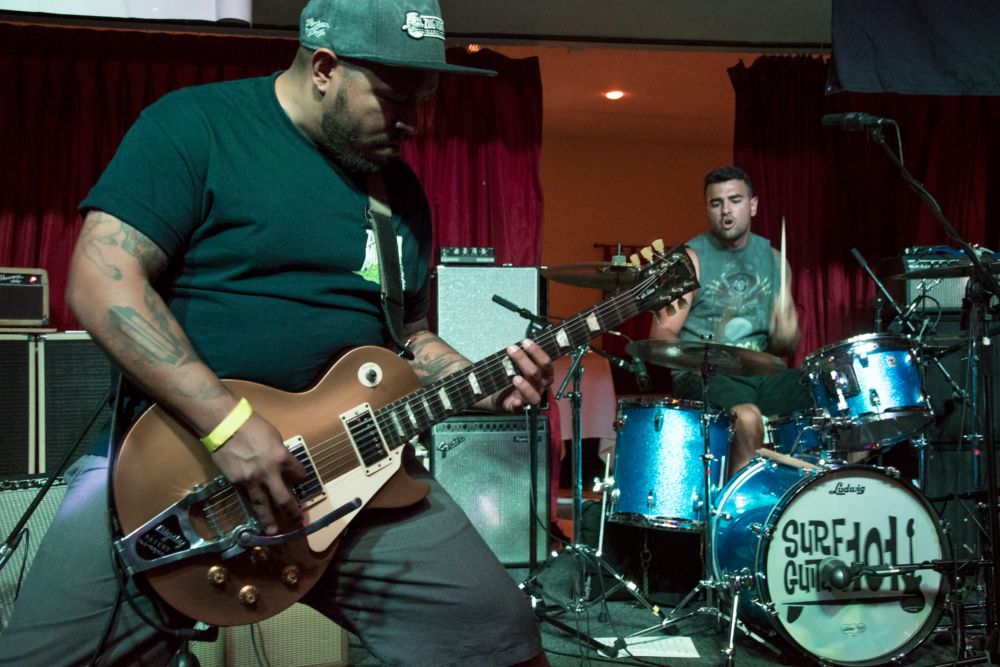 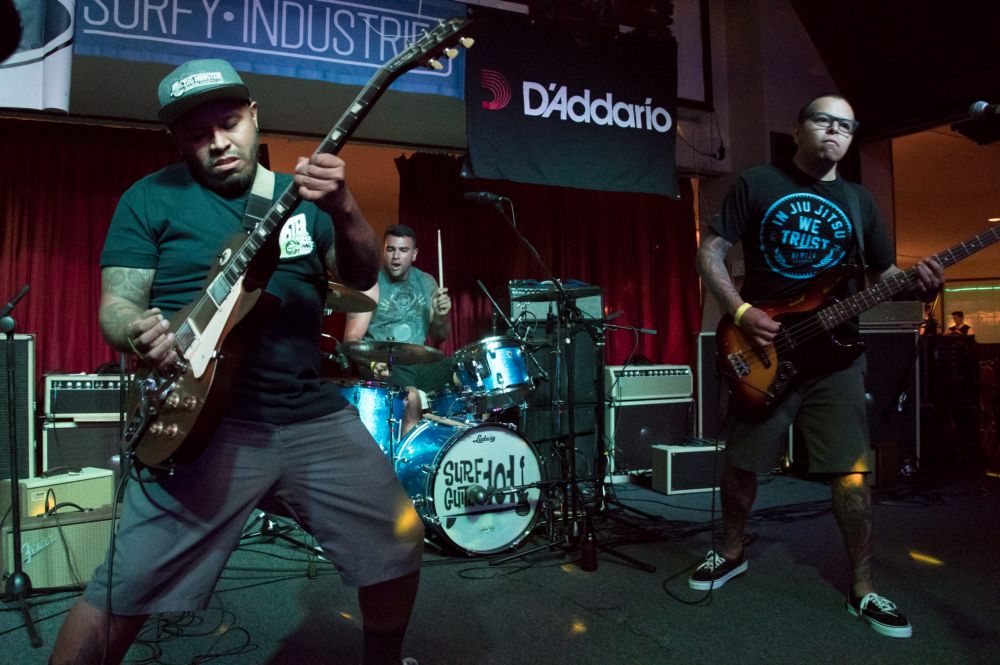 The word surrounding Tequila Worms was energy. This power trio were playing at full tilt from start to finish, and it was a blast. The drummer in particular was living up to his T-shirt featuring Animal (the muppet) with non-stop furious movement and never merely keeping time. 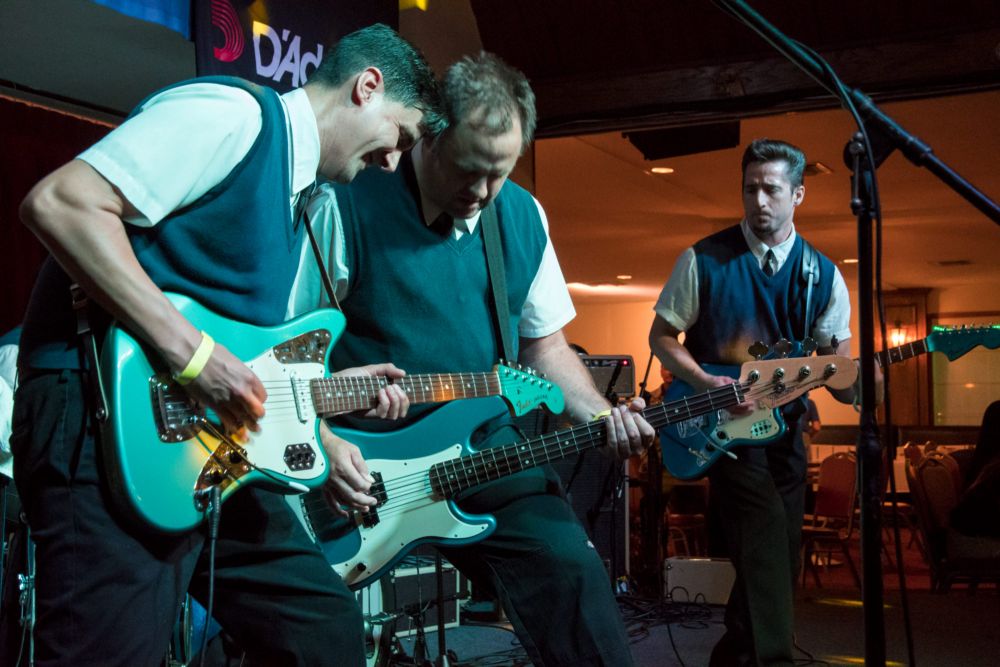 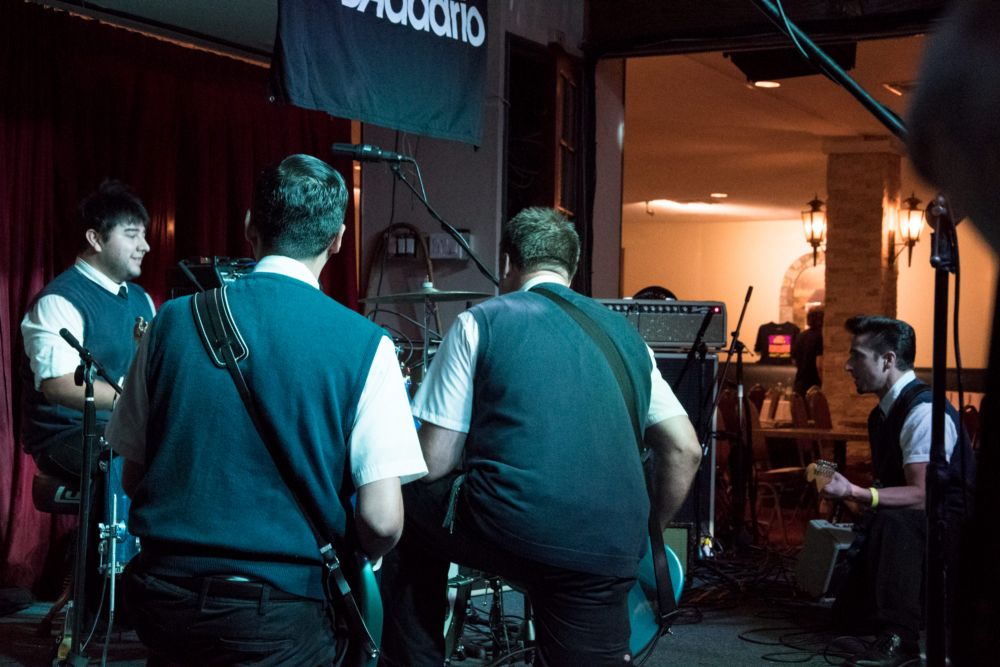 I've always thought The Volcanics are underrated, and they were a feature act for this convention to me. Maybe this is waxing a little philosophical here, but part of the draw to traditional surf is the pure teenage sensibility of it: the fact that usually these were kids whose motivation wasn't art but to impress their peers and shake out some puberty. Now granted, the Volcanics are quite post-pubescent, but they do have that sorta almost schmaltzy 60's teen wholesomeness going, and they can back it up with instros that balance tenacity with sincerity -- and every record of theirs has done it consistently. Their live act carried that same upbeat horsin' around fun. I loved the gimmick of all the guitarists turning to face the drummer when he solos. So glad I caught these guys, they absolutely delivered. 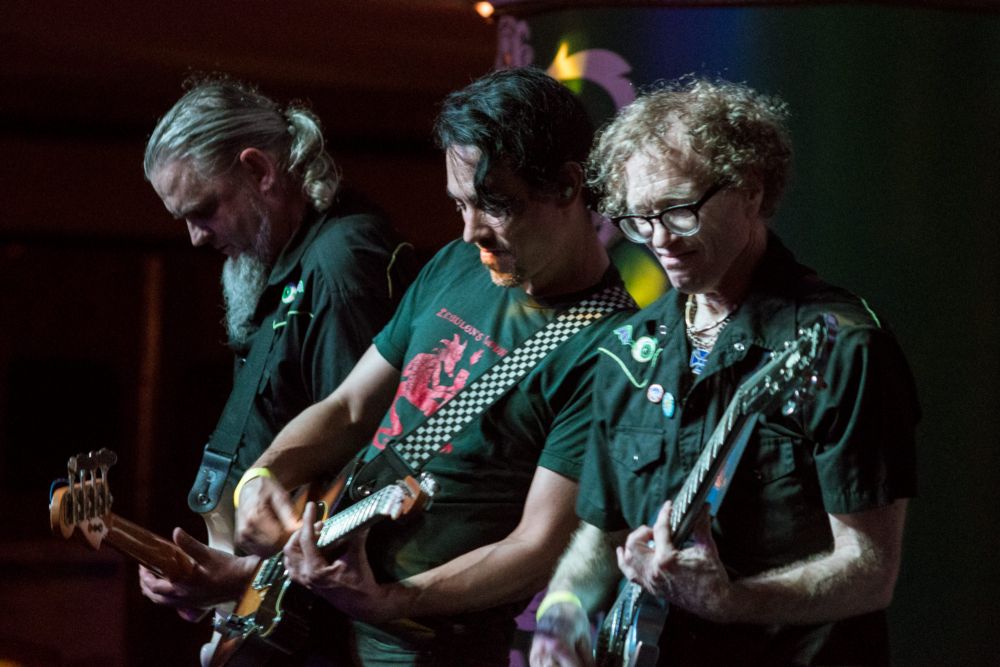 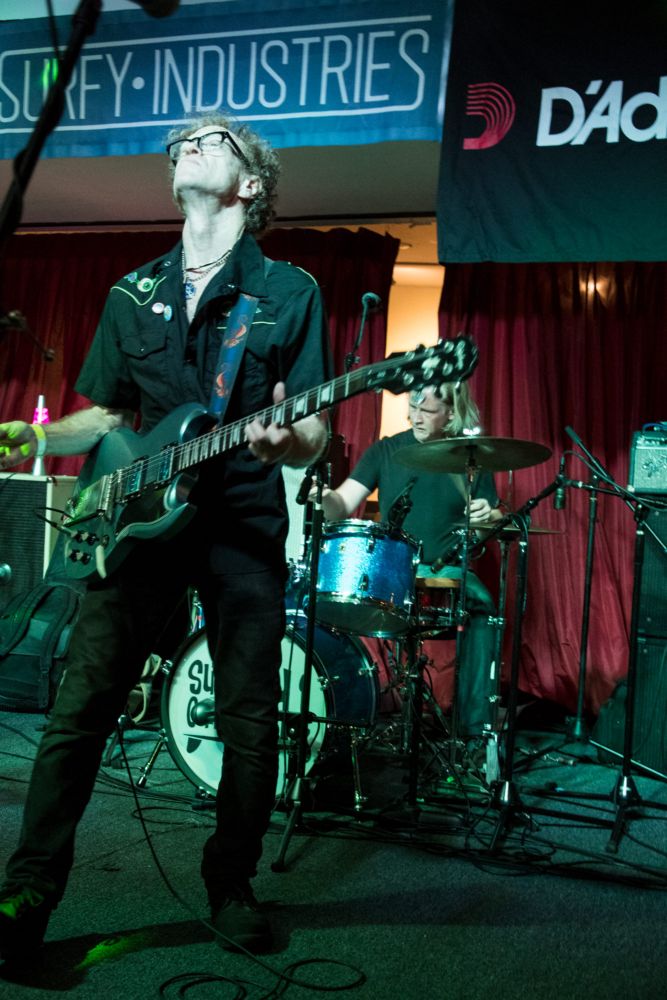 And then there's The Insect Surfers who Jeff reminded us is the longest continuously running surf group. The core of that is Dave Arnson, who I feel the need to point out was perhaps the most likely to be seen gyrating all over the place dancing to any other band on either night. That gyrating didn't stop when he got on stage, he was constantly in motion and adding energy to their songs. Seeing these songs live gave an extra edge to them I think, a better pounding and pulse than I've dervied from the recordings, and they were much more dance-worthy than the progressive mindset I get from the LPs and CDs. I got a kick out of Dave's need to add an appropriate hat for the more desert-like songs. 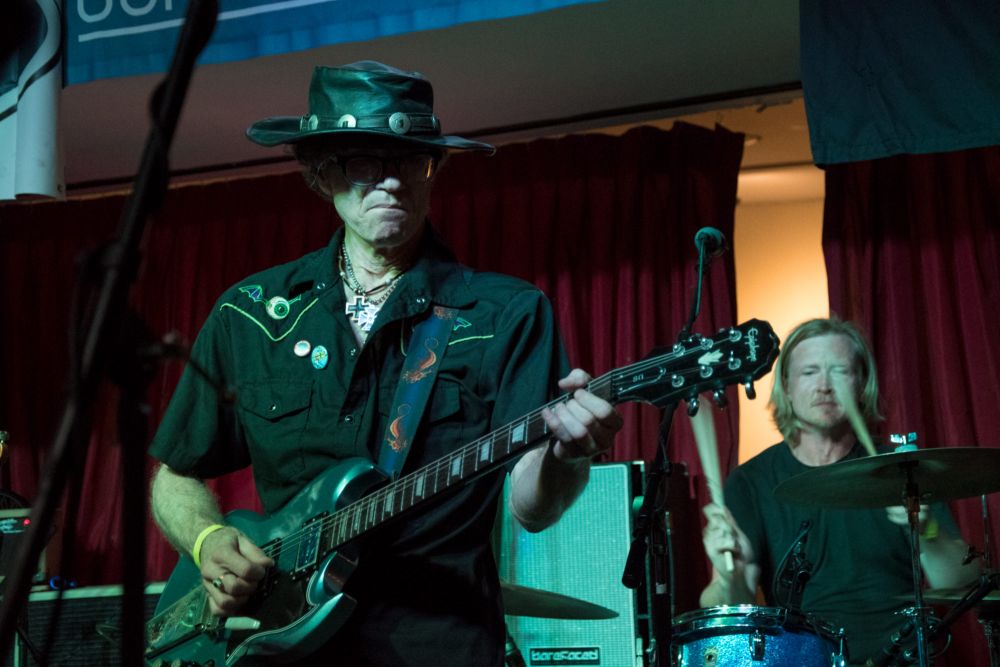 And that was Day 1! They closed down the interstate on the way back so I didn't get to my bed until 2am, which was 4am my time. Yikes! Day 2 coming soon!