The Mystery of Morgus with the Daringers - Morgus Creep

NOTE: Case closed! Click here to jump to the bottom where I found out the details from the Daringers' drummer

I have always felt like my show has some sort of spectral link to Morgus the Magnificent. I'm too young to have seen his show, but callers have frequently mentioned him, and I've even snuck in his 45s a few times. Who is Morgus the Magnificent? He was the long-time curator of Morgus Presents, a host that introduced horror movies to television audiences with humorous skits in between. Today there's Chillder Drive-in and Svengoolie to compare to, and historically Elvira and Vampira and the like - though Morgus didn't quite have the sex appeal that they had. He was based in New Orleans and the show ran from the late 50s to the 80s. It makes sense that a campy curator of horror movies would share fans with a RIDICULOUSLY COOL curator of surf rock. That's a venn diagram that I would expect to have a lot of overlap.

The problem is, we know who Morgus is. In fact, in real life he's Sid Noel, still resides in the New Orleans area. We don't know who the Daringers are, who made the spooky, atmospheric monster called "The Morgus Creep"

Now Morgus had a few records already. Legendary ones! Morgus and the Ghouls made "Morgus the Magnificent" and "The Lonely Boy" recorded by Cosimo Matassa with Frankie Ford, Jerry Byrne and Mac Rebennack as musicians. Pure New Orleans royalty! There's also the more enigmatic "Theme from the House of Shock" and "Scientific Experiment by Morgus the Magnificent" which had a lot more meandering theremin to it.

This one is different. It's on a small Detroit label called Fulton, and a surf instrumental is not likely to be New Orleans musicians. So one redditor thought to ask "who exactly are these guys?". When this was brought to my attention, I found myself kinda transfixed - this was a rare intersection of New Orleans and surf rock, and I HAD to find out. They never released another record, and nobody seems to know who exactly the musicians were. And just so you know, as of writing this, we still don't really, but we definitely got a lot closer.

So we tried a few things.

We quickly figured out that Morgus was not an exclusively New Orleans phenomenon, and that he did a number of shows in Detroit and was regularly syndicated there. So "what was a Morgus record doing in Detroit" was not really a big question anymore. 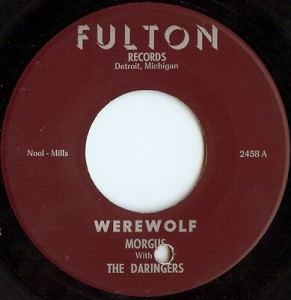 The flipside of the record is a vocal track called "Werewolf" and has the artist as "Morgus with the Daringers". On the left side is the composer attribution "Noel - Mills". We assumed that Noel was Sid Noel, Morgus' real name. But if that's the case, who is "Mills?" One longshot guess that was made: Rick Mills is the guitarist for the Detroit-based surf rock group The Volcanos (they rule, check them out). He didn't really seem the right age, and the Volcanos heyday was in the 90s, but worth a shot, right? Maybe it's a relative of his?? Rick responded to a message and on the SSOR facebook page: doesn't know, he's curious too.

I thought I'd take a look in John Blair's surf encyclopedia "The Illustrated Discography of Surf Music 1961-1965". John does take note of it! But with nothing more than a "?" underneath for personnel.

Maybe you're thinking "Why not just ask Morgus?". Apparently Morgus isn't an easy man to find these days. He's not a recluse or anything, but seems to like to separate himself from the Morgus character, live his life normally. We did not expect that route to go anywhere. Well, I found a lead! Micheal Ziants of Airlift Productions had commented on a Nola.com article that he was friends with Morgus, and that they talked regularly. I emailed him, showed him the reddit thread, asked if he could ask Morgus about it sometime. A few hours later, he had delivered spectacularly. Mike is voiceover studio wizard, he lives in an audio world, so we got audio.

Ladies and Gentlemen, Morgus himself

So we've learned the following

We still don't really know who the Daringers are, nor do we know who Mills is. Keep in mind, that attribution area was often abused by the publisher, it may be somebody at the studio trying to collect royalties on the backs of the actual musicians. It may also be that Detroit is a red herring: this could be in another Michigan town that came into Detroit to record.

So there's still more to learn. A big part of this post is to bring visibility, see if somebody wanders across with an answer. There's one piece of the puzzle that might hold clues, but it's a hard one to get: the picture sleeve from the record itself, pictured at the top of this article. I've only seen a record of it being sold on ebay once and for $230. Perhaps there are more details on the back cover of that picture sleeve.

If you might have any answers, please leave a comment! I've gotten ridiculously sucked into this, and I want to unravel this mystery!

footnote: Thanks SO much to Sid Noel and Michael for indulging us in this hunt. Michael told me that Sid had just told him that his wife of 52 years had passed away. I'm so sorry to hear that, and I can't believe that Sid still took time to answer these questions.

I'm having a really hard time believing this happened. Went out for my saturday morning garage sales. Most of the record sales were bust, but decided to follow a road sign to one in Metairie -- not one that I had found on craigslist. They asked if I was looking for anything, and I said "well, I'm always looking for records". They ask what kind and I said 50's and 60's rock & roll, and she said "well, I definitely bought a lot of that but I need to see what I'm willing to part with. Let me take your number down". So I give her my number, and I mention "I'm always looking for 45s too if you have any of those". She does, and she brings them out and says "it's just stuff a teenage girl would listen to". 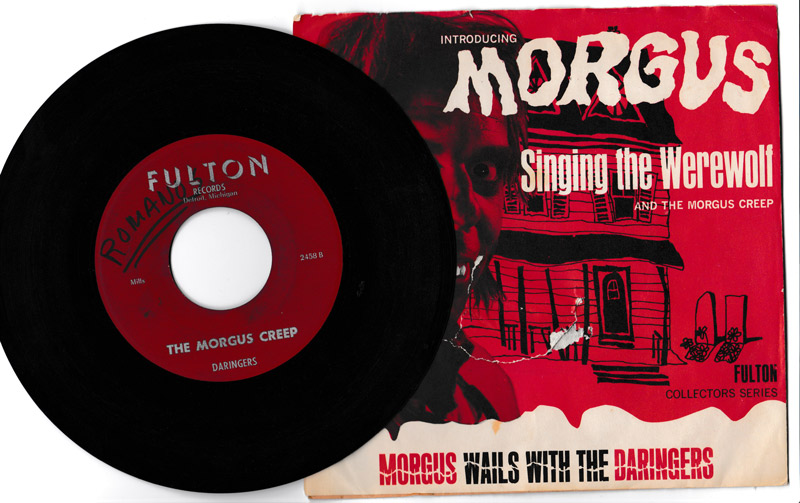 Not one but two copies of Morgus and the Daringers. Most of my Morgus collectnig friends don't have copies of these, let alone a picture sleeve. The picture sleeve has a tear on it, as does the label of the record inside, but otherwise they're in great shape. 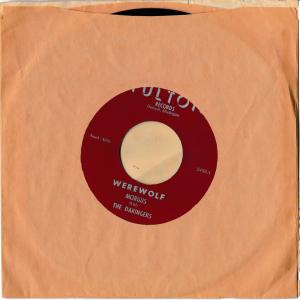 Oh.... Turns out the picture sleeve is merely glued onto a regular 45 sleeve. There is no back cover. So I went home still elated, but figuring I'd hit another dead end.

But wait! On the other 45, the one that didn't come in a picture sleeve, there's something written on there. Not something I normally pay attention to, it's usually just somebody saying "Danny's record" or something dumb like that, but look! 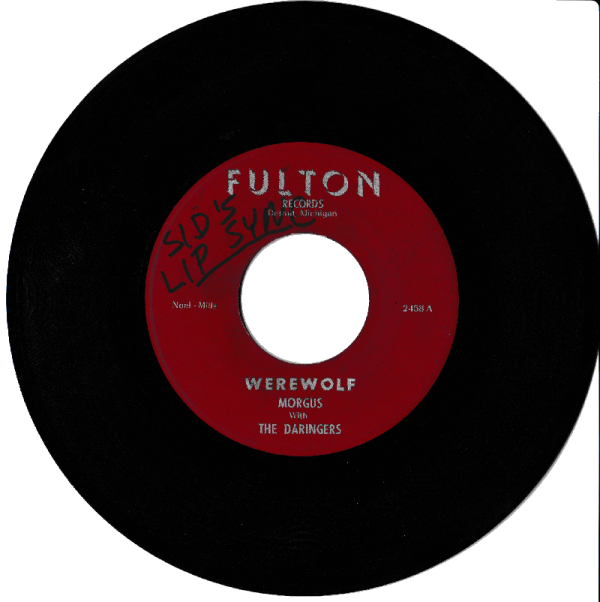 Sid's Lip Sync? Well if you've been following along, Sid's gotta be Sid Noel aka Morgus. And sure enough, this is the side with his vocals. So on the other side, the instrumental side with the Daringers we have this: 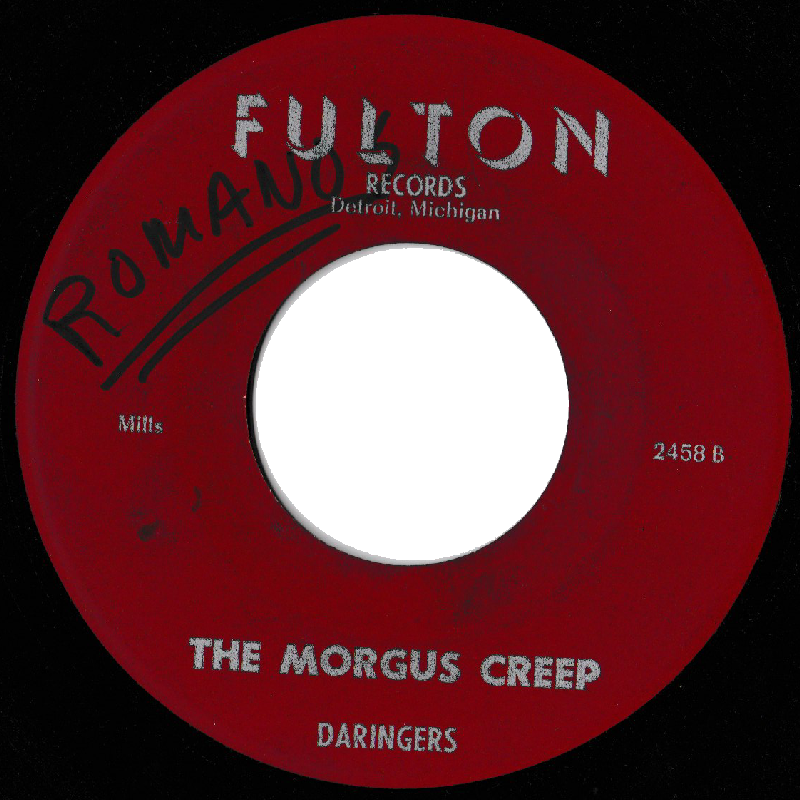 .... What? Romanos? Could it be that perhaps the family band that Morgus mentioned actually weren't the Daringers. Maybe they just liked that name because it's the name of a gun (albeit misspelled). But maybe the family we're looking for is actually the ROMANOS!

Take an even closer look. That writing on there appears to be underneath the silver label text. It is possible that marker it was written with simply didn't soak into the silver lettering, but I'm doubtful that's the case. I think these were written by somebody in the Fulton studios before they stamped the record with the information. That suggests that these markered bits may actually be something worth believeing.

One other thing about this: the person I got this from did seem to know Sid Noel somewhat, but she didn't seem to be that interested when I breathlessly told her about this mystery I'd been trying to solve. So I don't think I'm going to learn anything more about this from her.

So we're back on the trail here, though still nothing terribly solid to go on. In the meantime I'll leave you with the highest quality copy of this cover you're likely to find.

I just got off the phone with Al Vadnais, the drummer for The Daringers. His son was looking up that old Morgus record that his dad played on and found this page. Al got a kick out of this whole thing, and decided to set the record straight -- because I was NOT on the right track at all!  Unfortunately, I thought I was recording this conversation but doesn't look like that worked, so I'm operating off memory and my notes here.

The Daringers were not a family band, and none of them were named Daringer. Al doesn't know where the name came from, but this was the only record they ever made. The members were:

The Daringers were, in Al's words, barely old enough to drive when they made the record. They played for about 3 years in the teen dance halls around Livonia Michigan where Al and Bob still reside. Rich and Larry are still alive and well too, though they've moved since then. They weren't primary an instrumental band, they played all the hits of the era for the local teen dances, though they played all the Ventures hits of the time. Al has continued to play drums in several groups in the area throughout his life.

Their manager Don Mills was a friend of Sid/Morgus and was the one that made this record happen. Morgus joined them live in studio for Werewolf. Al says the record didn't do very well, they didn't press many copies (anybody trying to find one now has figured that out), but "that was out of his hands". Thankfully, he has a copy and knows at least one other member does.

Al says he's got a picture of the Daringers with Morgus and said he'd try to send me a copy. I really want to thank Al for getting in touch with me, this whole thing has been a lot of fun to dig into. I really thought the trail had gone cold, but I now have all my questions answered. If YOU have questions about this record, leave a comment and I'll send it to Al.

No new info but I have pictures!

First, the Daringers with their manager Don Mills 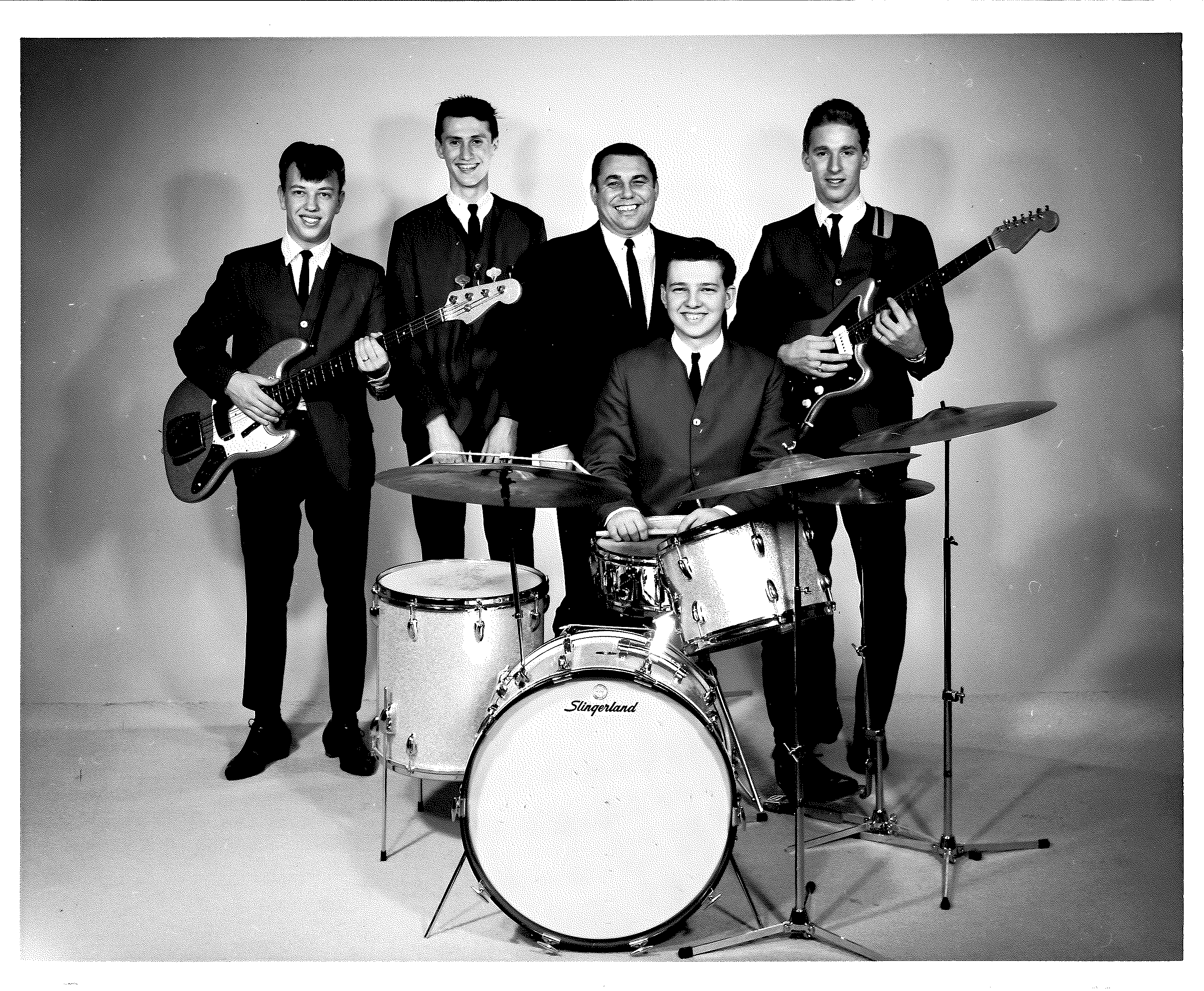 The band, their manager, Morgus, and more copies of the picture sleeve than you'll ever seen in one place 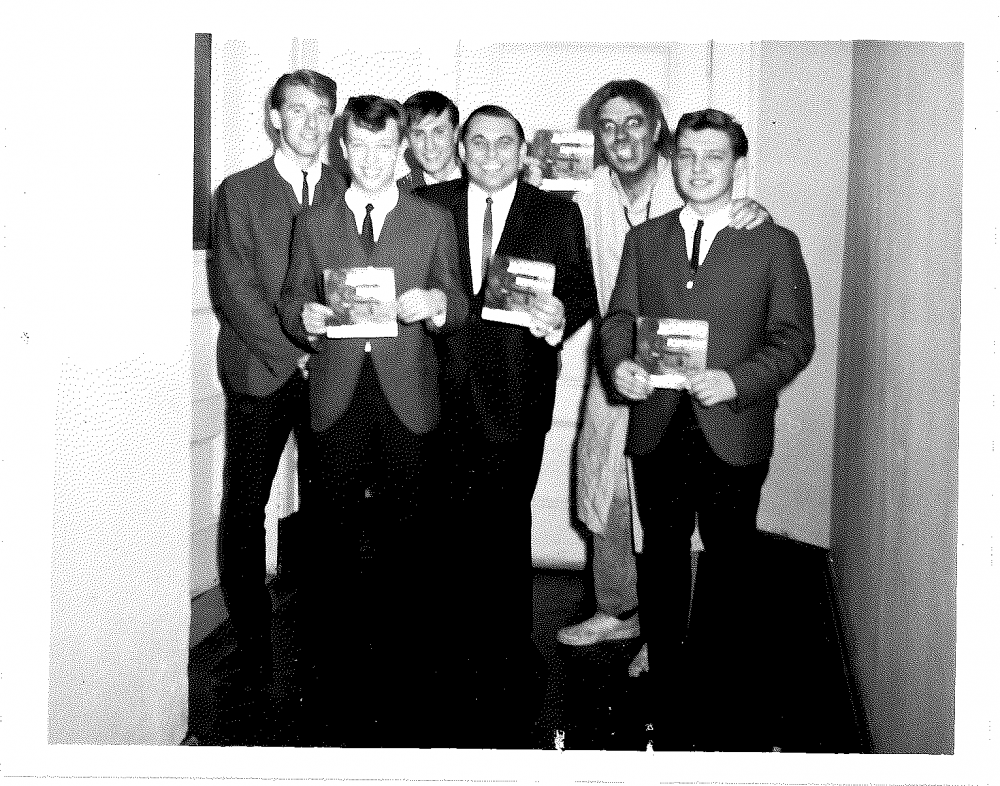 And I saved the best for last, the Daringers with Morgus the Magnificent 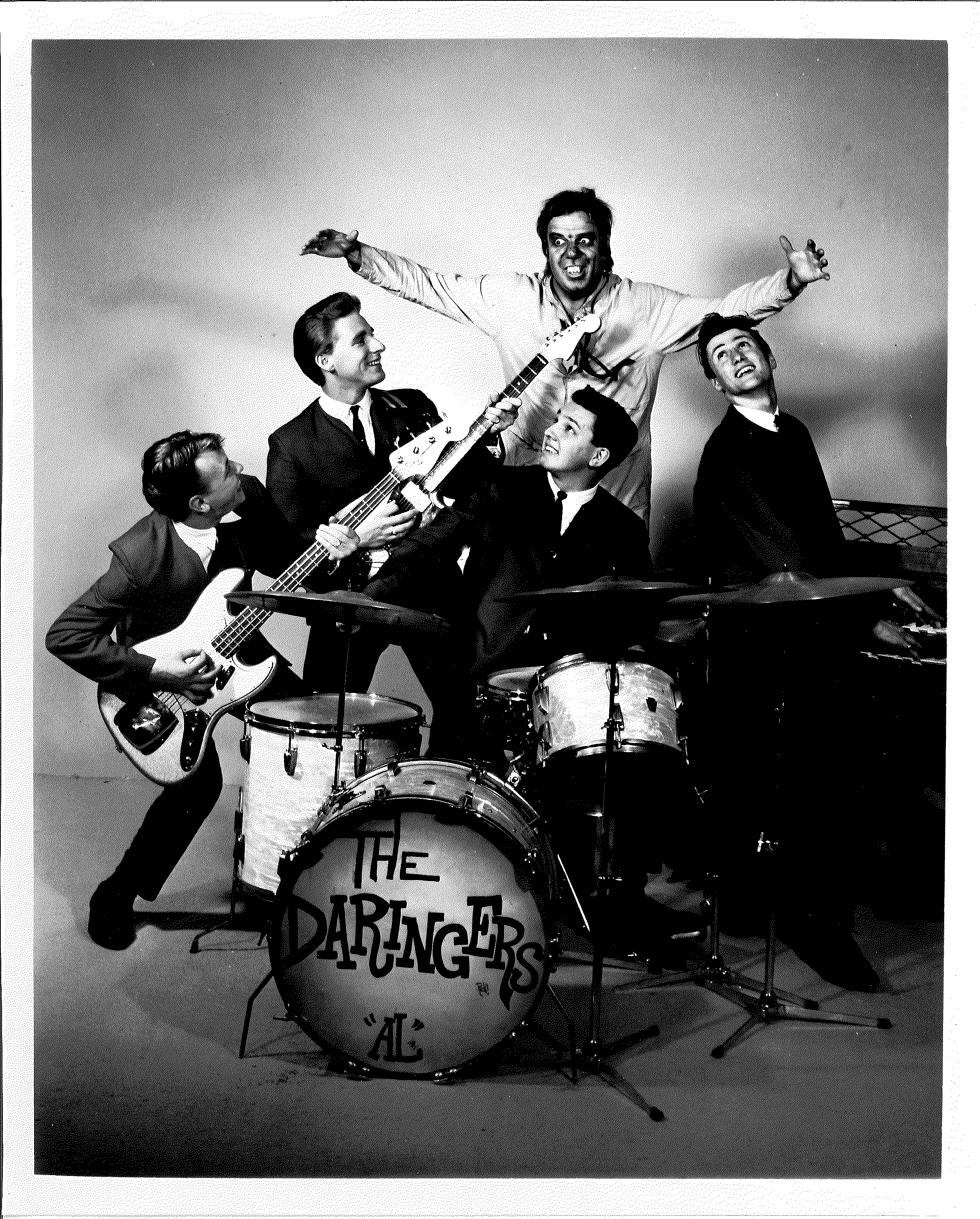