This is my own terminology here, but the rad category is for the instro bands that thrive on adrenaline. Moreso than the other categories, a lot of these show punk and metal influences. It also rhymes with trad, and I like it more than "aggro".

Dinosaur Ghost had a pretty great demo hangin out on bandcamp for a while, but this year we finally got a full LP from them, complete with very pretty album art. While this has a few songs at a pretty normal energy level (including a Salt n Pepa cover), the warm-blooded heart of this record is in the mean ones like "Jeff Goldblum" and "Sand Level". It's not the hardest, it's not the fastest, but these are great songs that pack a punch. "Mandar" in particular with it's clever tempo changes probably makes my top 10 playlist for this year, not that that playlist exists. His name is Rapido and he is indeed. Even the song titles like "Caffeine Racer" and "Road Rash" suggest speed and a frantic energy. And of course, there's "We're Gonna Feed Your Voodoo Ass to the Lions", which is surprisingly lighthearted despite the full-throttle pace. Definitely a highlight. Rapido isn't trying this for the first time; he's released several surf records since the 90's such as his stint in Surf Creature. I'm looking forward to more. A late addition (so late it missed consideration for Best Album Art), this is probably the one that I've had the least opportunity to digest. I hadn't heard of these guys before the Monsters of Surf compilation last year, but this one made an impression. It's got a good sense of humor that lashes about with some psycho guitar, reminded me a bit of Johnny Carbonaras in that respect. If you're looking for the heaviest instro record of 2015, I believe this is your stop. If you're not already acquainted with his work with the Clockwork Wizards, hopefully you know Arno from The Irradiates (who won this Gremmy last year), Antena Tres or Stef and Arno. Arno is as frantic as he's ever been, but the guitar sound is colossal on a catastrophic level, and meaner than ever. I'm curious how fans of post-rock like Russian Circles or even Converge or Envy fans would receive this, as it seems to shoot for a similar vibe of epicness and rage. That said, one of my favorite tracks is actually the more melodic (not to mention Anthemic) "Loose Lips Sink Ships". An absolutely killer album and I continue to look forward to anything Arno touches.

And the Gremmy for Raddest Instro Record goes to I figured that Bug Terminal would be the one to beat this year, but I kept coming back to Arno's labelmates Demon Vendetta. Their previous album Guardians of the Bitter Sea had flashes of greatness but didn't come together as a whole. They went in a slightly different direction with this one, their horror focus diverting a bit towards a VHS Trash-cinema/John Carpenter aesthetic, at least on the album cover. Very in right now! I've been debating with myself about whether that manifests in the music aside from the Carpenter-esque electronic track. How does that explain the various jungle themes? What you get is a wild patchwork of mania, a kitchen-sink of ideas pieced together deftly and with a wink. You can only describe it so much though, when we're talking the rad stuff it's the feeling. Does it get you riled up? Yep. All of it, and it hardly ever lets up. It's so damn fun that I'll listen to it over and over again. 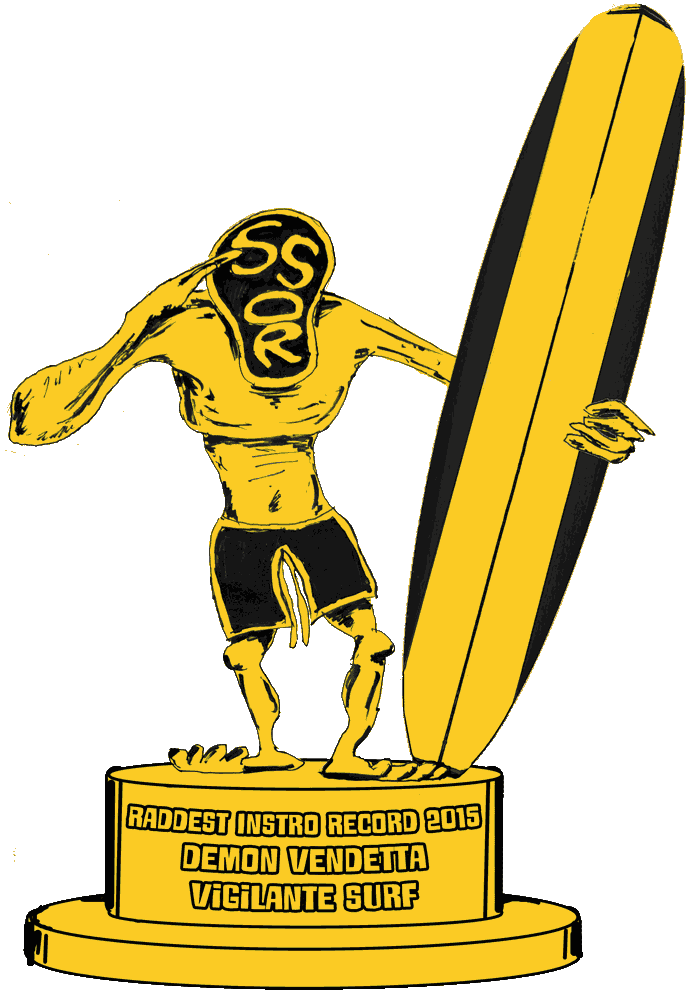